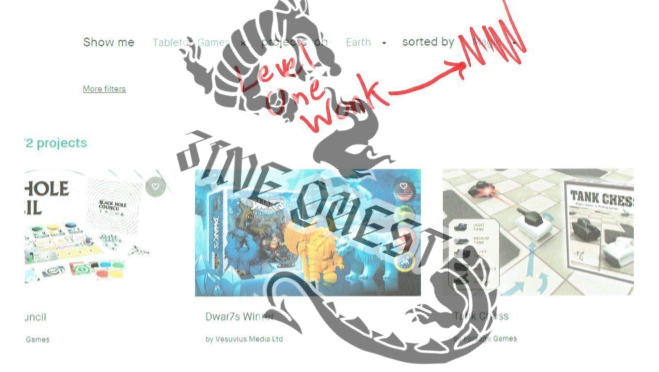 Two weeks ago, we cut our regularly scheduled Kickstarter Wonk broadcast a bit short to bring you a sampling of projects from the second year of Kickstarter’s celebration of all things DIY and RPGs, ZineQuest. As February rolls on so does ZineQuest, with many RPG Kickstarter aficionados like myself already bemoaning the dent in our wallets made by this onslaught. As you may remember, ZineQuest campaigns are limited to a two week run time, so by the time of this posting the campaigns I featured in the first article should be already done, hopefully funded and ready for their creators to get them out into the world. Fear not, though, because here at the midpoint of ZineQuest there’s a whole new batch of campaigns just waiting to drain away even more of your paycheck. Like before, I’m going to try and overview as many campaigns as possible, grouping them either by content or theme. While I won’t claim to be complete (or unbiased), hopefully I can give a rundown that’s more useful than trying to scroll through the roughly 125 projects currently live.

First, My Friends: Like before, the first section is people I personally know who make cool stuff, and like before there are a couple projects of note. Eli Seitz, who I know through the Boston Area Game Designer’s Meetup, has a *second* ZineQuest campaign ongoing. Called The Last Place on Earth, the game has players taking on the role of explorers in Robert F. Scott’s doomed expedition to the Antarctic. Another BOARGADE member (blame Will Jobst for that acronym, not me), Michael Dunn O’Connor, is campaigning Rebel Crown, a Forged in the Dark game focusing on a contested claim to the royal throne. Last but definitely not least, Cannibal Halfling’s own Jason Brown is campaigning his game Our Queen Crumbles, a weird fantasy game about a dead queen’s retinue and their quest for revenge.

More Indie Offshoots: Trophy continues to make a splash. Oligarchy, a game of political intrigue and uncomfortable parallels with reality, is ‘Rooted in Trophy’, as is Sunken, a ‘game of nautical horror’, and Night Reign, a game of ‘stealth, guile, violence, and devilry’. A pair of games, This Thing We Started / The Brokenhearted, are both hacks of For The Queen, which is a cool game that doesn’t have many hacks or offshoots yet. There’s also Thistle and Hearth, a Belonging Outside Belonging game, and Primeval, while not a complete game, is content for Mothership.

So Many Maps: The hexcrawls are multiplying! There’s The Evils of Illmire, Lost in the Shrouded Lands, Sunlands, and Science Vessel of Dr. Uaerom. There’s also a bunch of other map-driven or map-making games. Delve is a game of dwarves digging too deep, while i’m sorry did you say street magic is a citybuilding game about fantasy cities and their, well, street magic. There are also zines which are just maps and the things that go on maps, like A Visitor’s Guide to the Rainy City and RPG Citybuilding Extravaganza.

Serial Numbers Filed Off: For the Honor is a game based on She-Ra. The Gaslight Club is a game based on Westworld. Operation: Playground should be based on Recess, frankly. The New Tales of Oz is…well, what do you think? Layabouts and Degens is not based on Letterkenny, but I think of Letterkenny any time I hear the word ‘degen’ so I’m including it here.

Apocalypses: Lots of people thinking about the end of the world for some strange reason. HOME: SURVIVAL takes a serious look at what it would mean to be alive at the end of the world. Snake People is a storytelling game about an apocalypse, one that might even have some optimism in it. Dirt is a game which takes place in the apocalypse of what once was a traditional fantasy setting. KISHU is inspired by Akira, a game about a teenage motorcycle game in a climate apocalypse. Finally, Fight Planet makes your apocalypse over-the-top, adding roguelike elements to a game about fighting, dying, and fighting again.

Very Specific Content: Hivesworn: Queensfall is a game where you play bugs. Gourmet Street is a zine about street food you may encounter in an RPG. Dirty Town is a game about pigeons. Mishaps of Extraplanar Interiors of Infinite Storage Boxes is a zine specifically for dealing with the physics and implications of infinite storage items like the Bag of Holding. Similarly, The Ioun Codex is a zine dedicated entirely to Ioun Stones, those things that orbit around your wizard’s head. Oh No I’m Late to the MCR Concert And Have An Extra Ticket saved me the effort of having to write a description. Finally, and possibly most weirdly, The Baby in the Bean is a game specifically about hiding a 50 foot tall baby inside “The Bean” from Chicago’s Millennium Park.

Playlists and Roadtrips: A couple games about the act of compiling a list of songs, which sometimes involve compiling a list of songs in real life. I’m gonna be is a solo game, specifically about music, roadtrips, and the self-discovery often associated with both. Monster Mix is described as a “Role Playlisting Game” and is, succinctly, about being yourself.

Zines for Picky Eaters: As you may have guessed, there are a number of 5e zines in the queue. Valley of the Forgotten Kingdom is a zine-length adventure. 5 Room Dungeons is a collection of adventures and adventure seeds from Johnn Four, author of the long-running RolePlayingTips.com. The Forest of Lost Children brings ‘dark fairy tales’ to 5e. For those willing to put hot sauce on their eggs, Dungeon Delve is a traditional fantasy zine for Savage Worlds.

Meta: First, Wizard Funk 2 is more literally meta by taking direct inspiration from the original 1970s zines and APAs which ZineQuest was inspired by in the first place. Next, Disk Horse #1 is fascinatingly meta on a couple levels. First, the game is inspired by its namesake, the sort of ‘discourse’ about RPGs that goes on in the unfiltered spaces of the internet like Twitter. Second, the game is actually about a fascinating event in RPG history that had an outsized impact on the hobby, specifically when filtered through the Satanic Panic. James Dallas Egbert was one of two gamers who committed suicide in the relatively early days of the hobby, the other one being Irving “Bink” Pulling. Each of these victims had a loud “advocate” who tried to point the finger at RPGs: in Pulling’s case it was his mother, Patricia, and in the case of Egbert it was a private investigator, William Dear. So what does this have to do with Disk Horse? The game is about an incident described in Dear’s book, where he paid college students to run a game of D&D for him. While I think I’ll need to back this game to see how it comes back to Twitter, the result looks intriguing, amusing, and yes, incredibly meta. Finally, in a more boring sort of meta (though that is not meant to demean the product, which looks great), Splat is a collection of essays from around the tabletop hobby, specifically about the breadth of play inherent in roleplaying.

There you have it: another 40+ ZineQuest projects, ready for you to peruse and back at your leisure. With a total somewhere around 70ish for the beginning of the month and now, I’ve read a lot more campaigns than I usually do. Still, with small form factors and equally small prices (physical copies for $5-10 is wildly cool, even for small items), it’s easy to find several projects you’re interested in, making the increased amount of reading necessary to be even a little bit helpful. Hopefully everyone finds something they like and, who knows, I might reprise this one more time for the tail end of ZineQuest when I write next month’s Kickstarter Wonk!