A young Bride. A powerful and rich man with a beard that is shockingly blue. A massive house full of rooms, each room full of horrors. A ring of keys to open the doors, but one room is forbidden to the Bride by her new husband. A message that calls the husband away, leaving the Bride alone to explore her new home. An inexorable curiosity that drives her to open the door anyway, only to discover the bodies of previous, slaughtered brides. The husband returns, and discovers what the Bride has done, and the forbidden room gains another occupant. This might summarize the French folktale known as Bluebeard, a story whose most famous surviving version was published all the way back in 1697. But in this case it also summarizes Bluebeard’s Bride, an investigatory horror tabletop roleplaying game from Magpie Games in which you, my friends, are the Bride. END_OF_DOCUMENT_TOKEN_TO_BE_REPLACED 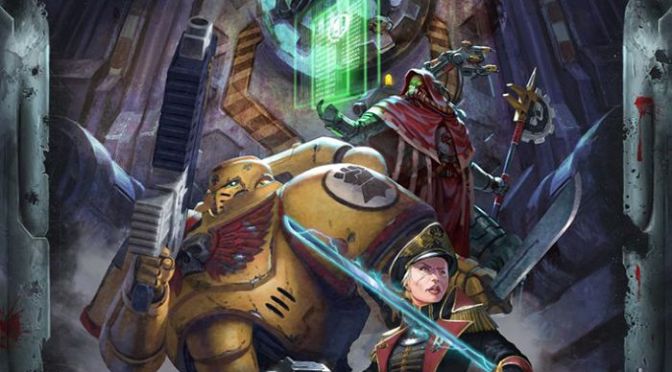 When Fantasy Flight Games lost the Games Workshop RPG licenses, two properties were left in the lurch. Warhammer Fantasy Roleplay (WFRP) was picked up by Cubicle 7, while Warhammer 40k’s RPG properties were grabbed by Ulisses Spiele, best known in the US for their reboot of TORG. Around the same time that the Fourth Edition of WFRP came out, a new game in the 40k universe was also released. Unlike WFRP 4e, Wrath and Glory steps away from the tried and true d100 system to create a game with 2010s sensibilities that still feels planted in the grim darkness of the future.

END_OF_DOCUMENT_TOKEN_TO_BE_REPLACED

An Illusionist with a well-earned reputation for honesty, all so they can tell a lie exactly when they need to. A Bard without a voice, tasked with telling grandiose tales. A one-armed Duelist struggling to quell the rage within her heart. A Worldly Rōnin hiding a deadly secret that forced her to flee her clan. An Outrider with a chip on his shoulder, trying to make others accept his clan while wanting to prove his clan’s superiority. Each of these Samurai has found themselves invited to the Winter Court of Rokugan, so we’re following them into another Meet the Party for Legend of the Five Rings!

END_OF_DOCUMENT_TOKEN_TO_BE_REPLACED

Mecha that follow the movements of their pilot’s limbs. Carrying gear and weapons into battle instead of bolting it on. Putting your machine together piece by piece instead of wholesale. Believing in the you that believes in yourself and throwing galaxy shurikens instead of firing bullets. Stomping from one hex to the next. Engaging the transformation mechanism. Genesys Mecha has tested its prototype, its advanced models, and its experimental machines. We’ve mustered the pilots, and seen the kind of damage that mecha can inflict on one another. We’ve launched the ships and support craft that will carry our squads into battle. Now it’s time to revisit the drawing board, tweak a few things, and think of some new ideas with Genesys Mecha: Alternate Rules!

END_OF_DOCUMENT_TOKEN_TO_BE_REPLACED

Way back when, at the genesis of this site, I wrote a “Novice’s Guide to Powered by the Apocalypse”, a Powered by the Apocalypse (PbtA) 101, if you will. This article covered the basic mechanics and underlying assumptions of games written with the PbtA framework, and covered a few of the more popular games that were out at the time. Now, nearly two years later, PbtA is still growing, and has attracted many players to its fiction-forward, high-stakes style of gameplay. I’ve also run and played more PbtA games myself, and have noticed some really interesting elements that people have trouble engaging, take for granted, or even fight against. This 201 course to PbtA games should provide advice and information about getting the most out of the full range of PbtA games and campaigns.

END_OF_DOCUMENT_TOKEN_TO_BE_REPLACED

Finally ascending from the mine of fire, stone, and mephits, the adventurers headed north towards the Imperial Shelter. They camped along the road, slept without incident, and made their way back to the river they had originally followed from the coast. The road crossed the river further inland, in an area they had not yet been in before. And as they prepared to cross a flooded causeway to continue on their way, they spotted a giant metal beast, drinking from the river. This bull didn’t eat grass…it was a Gorgon, which subsisted on ground up stones from its petrified prey. It saw the adventurers, and got ready to charge.

END_OF_DOCUMENT_TOKEN_TO_BE_REPLACED

Man oh man, talk about a bumper crop this month! Nearly two dozen different Kickstarter campaigns, winnowed down to about 18 new games of note and then down to an even dozen . A top ten couldn’t fit all the games I wanted to write about, and I still cut out some really intriguing stuff. A new edition of Savage Worlds is being funded, and there’s a compilation of great sci-fi microgames called Four Ways to Die in the Future which, though it’s a reprint, is still worth checking out. If you’re looking for new games, though, here are those which I thought are most worth your attention.

END_OF_DOCUMENT_TOKEN_TO_BE_REPLACED

Greetings! For those of you who have been checking out our High Impact Heroics Adventure Log, you recently were treated to the backstory of Gil Phillips, the Beacon. Continuing the trend of, “How did we get here?”, our prologue revealed that the team broke some rules during their first teamup and got the attention of The Lawman. So, here is a little window into how that began, through the eyes of Morgan Teller, the Delinquent.

END_OF_DOCUMENT_TOKEN_TO_BE_REPLACED

An alien invasion that’s taken all the adult superheroes out of the picture, leaving the new generation to fend for themselves. A re-written world where heroes are only now beginning to discover their powers, where crime rules the streets with an iron fist. An academy of learning, where prospective heroes learn history, math, and how to punch a supervillain across the gym while trying to navigate a high school social life. A cosmic roadtrip that takes the heroes across worlds, time, and dimensions  in pursuit of the notes of a universe-ending song. A warning from the future, a cosmic wanderer, and a child of evil. Such are the new worlds and new heroes to be found in Unbound, the third and latest supplement for teenage superhero roleplaying game Masks: A New Generation from Magpie Games!