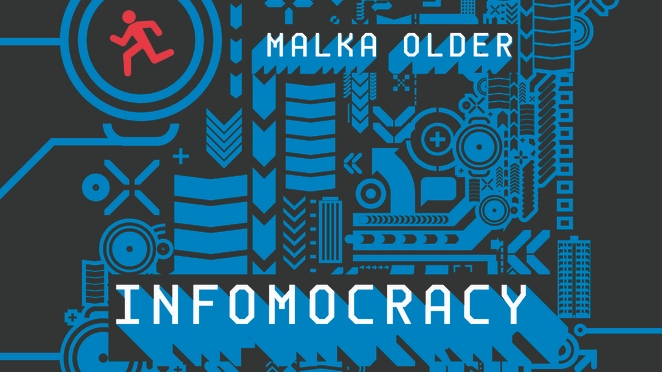 A Glimpse into the Vault is one of the oldest features on Cannibal Halfling, giving us opportunities to look into our respective “vaults” at other media we consume. These articles have covered a range of different items, but tended to stay in the gaming space…until now. You see, my personal vault doesn’t have many board games in it, but I do live surrounded by books. And recently, I finished a book that is not only a great read, but has some pointed lessons that gamers can learn about worldbuilding.

Infomocracy is written by Malka Older and was first published in 2016. It tells the story of a world in the near future where most of the world is ruled over by a unified micro-democratic government. The population that participates is divided into “cententals” of 100,000 people, who each vote on a government to represent them. Each government has power based on the centenals which elect them, but there is special influence (and statistical benefits) afforded to a government able to win a “Supermajority” of these centenals. The story, which I’ll summarize soon, focuses on the lead-up to an election where such a Supermajority is in play.

This story is instructive to gamers in a few ways. Infomocracy is science fiction and arguably Cyberpunk-adjacent, at least when it comes to assumptions around technology and corporations. That said, it is working on a completely different set of thematic assumptions, which is refreshing. Additionally, as one may be able to guess from the summary, Infomocracy (as well as its two sequels) is driven heavily around the exploration of a singular high concept. Driving a world and a story with a singular high concept is immensely popular in RPG worldbuilding, which is a big reason that Infomocracy can serve as a good case study of both how to explore such a high concept as well as the weaknesses that having one overarching idea driving your setting creates.

The story of Infomocracy centers around the third election of the new unified government, and primarily follows two characters. We are first introduced to Ken, a young staffer with the government Policy1st. Policy1st is a technocratic left-of-center organization driven by idealists who are trying to claw their way to the supermajority through analytics and ideas that are much better on paper than in reality (like refusing to have figurehead politicians). In the course of his work, Ken meets Mishima, who works for Information. Information is not a government, but a corporation…which happens to administrate the whole government. Information has a monopoly on the flow of, well, information to everyone throughout the globe, and they are also responsible for running elections. Through a series of events catalyzed by a disastrous earthquake in Tokyo, both Ken and Mishima become aware of a conspiracy to steal the election, and must act to stop the perpetrators without making it look like Information (or Policy1st) is trying to manipulate the results themselves. Meanwhile, a third viewpoint character, Domaine, is acting as part of an “anti-election” movement which stands ideologically against the current system exactly because such manipulations could occur.

One of the best things about this book is the ambiguity. In part because of how the viewpoint characters are introduced, both Policy1st and Information are first presented to the reader in a positive light. While there’s no cheap-trick turnabout that I can spoil, I will say that as more information is presented to the reader, things become considerably more grey. This is both intriguing (I admit I have the next two books waiting on my nightstand) as well as realistic; organizations are judged by their aims, their methods, and their members, and Older does a fantastic job of making it clear that you need to consider all three to have an informed perspective. You’re also made to question your emotional response to the events of the story; Information is obviously a Google analogue and is meant to be as if not more insidious as the real corporation, but you the reader are easily tricked into rooting for them because you’re given a sympathetic viewpoint character who is an Information employee. While hardly electioneering itself, Older definitely goes for the reader on a meta level when it comes to trying to figure out if there’s a “good guy”. Given that this is a sci-fi book about politics, I don’t think it’s a spoiler to say that there really isn’t one.

So Infomocracy is a neat piece of political science fiction. Beyond setting what can it teach gamers? As I noted earlier, Infomocracy is built around a singular high-concept, specifically its micro-government system. The way the setting is built, the characters, indeed the entire book all sit in service to an exploration of this high concept and what it implies. While this is not necessarily uncommon in fiction, in games it’s legion. Building a setting in this way, namely choosing a single concept to build the world around, has strengths and it has weaknesses, and Infomocracy highlights both. The main strength, of course, is that your high concept is something that produces clear and interesting consequences, around which players can build characters and GMs can build situations. This is definitely true in the book: Older explored the role of Information as the central oversight body through the character of Mishima, and explored what political campaigning would look like in the micro-government system through the character of Ken. Indeed, there are other vectors to examine as well, which is at least part of the reason that there are two more books written in the same setting. A good high concept also drives worldbuilding by presenting questions which the author/designer must answer. In the book I keep thinking back to multiple occasions where characters crossed from one Centenal into another; the inherent weirdness of micro-borders was something that Older grasped and took multiple opportunities to consider in her characters’ travels and travails through the book.

One of the primary weaknesses of a singular high-concept, then, is that there are some complexities and weirdness which must be overlooked. There is a sequence in the book where one character travels to the middle east, to a meeting in a country which has not adopted the Centenal system. This raises a lot of questions, which are answered to different levels of satisfaction. My big question, though, is how do these systems coexist? Given the way the system is organized, it seems like ‘leakage’ into non-participating countries would be a real strain, not to mention the inherent weirdness of any military situation created by these competing systems. There are answers provided in the book to my logistic confusion, but questions pertaining to how the system started and how it ended up where it did are a little thinner on the ground. The best explanations provided are the demonstration of the system’s fragility as part of the plot, as well as the fact that there are two more books in which these questions can be investigated a little more fully. And this provides some parallel advice to worldbuilders as well: even if you don’t figure out a neat solution to issues around your concept, don’t shy away from them completely. The real world is messy, and some messiness can often benefit your writing.

Infomocracy is good science fiction and a solid piece of worldbuilding. It also wears its high concept on its sleeve, which makes it a worthwhile comparative study for worldbuilders who are also building around a central premise. While you don’t need to write a novel (or three) to fully flesh out your premise, considering what sort of stories and conflicts occur around your premise is a great way to help flesh it out into something more dynamic that could make the basis for an interesting campaign. Infomocracy serves as a great example of this kind of fleshing out, and the second novel in the series, Null States, is sitting on my bedside table now.

Infomocracy is available on Amazon and through many other booksellers. The subsequent books in the series, Null States and State Tectonics, are also available now.

Like what Cannibal Halfling Gaming is doing and want to help us bring games and gamers together? First, you can follow me @LevelOneWonk on Twitter for RPG commentary, relevant retweets, and maybe some rambling. You can also find our Discord channel and drop in to chat with our authors and get every new post as it comes out. You can travel to DriveThruRPG through one of our fine and elegantly-crafted links, which generates credit that lets us get more games to work with (including the ones needed for this article)! Finally, you can support us directly on Patreon, which lets us cover costs, pay our contributors, and save up for projects. Thanks for reading!

One thought on “A Glimpse into the Vault: Infomocracy”