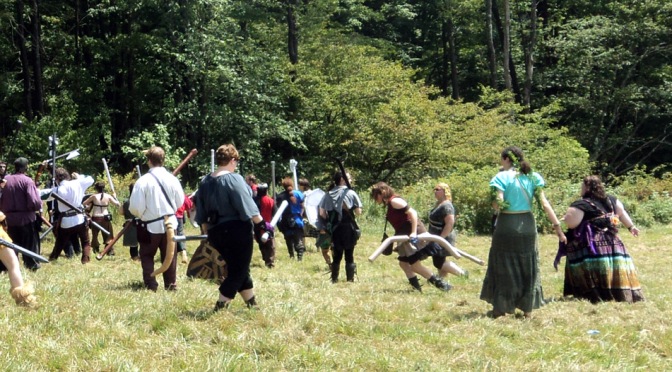 Live Action role-playing (LARP) is an umbrella term for role-playing games where players are expected to physically and actually take on the role of their characters, both in terms of acting and dress. These range from dramatic games where conflict is resolved using dice rolls, cards, or other randomizers, to ‘boffer’ games where a ruleset governing character abilities intermingles with the players’ actual abilities to swing weapons, memorize spells, and disarm traps. A game can range from one three-hour event at a convention to ten years of five three-day events per year, and just like tabletop games there is a range of genres and mechanics.

This past weekend, I took part in the kickoff event of Stormbreak, a new low-level campaign taking place at the Alliance HQ in northeastern Pennsylvania. Alliance was originally part of the New England Role-playing Organization (NERO), but has been an independent organization for roughly a decade. In a group with such a long history (the other campaign taking place at Alliance HQ is well over 20 years old), low-level campaigns like Stormbreak are vital to give new players an opportunity to get their feet wet without an intimidating amount of history and lore that other players have been immersed in for literally years. In this case, one of the new players was me.

This was not entirely a lark for me. My lovely girlfriend makes up one third of the plot team for the Stormbreak campaign, which gave me an opportunity to join the game as an NPC with a plot-relevant role. Like in tabletop games, all LARPs have PCs and NPCs. A large enough NPC corps is vital for the success of the game, and for that reason LARP events typically provide incentives for people to NPC their games, ranging from free experience points and/or gear for their PC to real-world discounts on event fees. Being an NPC at an event is a great way to try out a LARP; NPCs typically don’t get charged full event fees and many sites have collections of garb and gear for NPCs to borrow. Though I have dabbled in SCA events and own a small collection of appropriate fantasy garb, having access to Alliance HQ’s prop closet was key for my weekend, as I really had no idea what to expect before pulling into the Faire Play site on Thursday night.

Most NPCs in a game will split their time between playing characters that are tied into the plot of the game and monsters as part of random encounters and modules that take place throughout the event. In my case, I spent most of the weekend as a couple of plot characters, and most of my time as the High Sorcerer of the Mage’s Guild. As I found out, this was starting at the deep end. It would be hard to imagine an NPC with more different spells, combat abilities, items, and skills…in addition to trying to stay in character, I was also taking notes about the spells on my character card, frantically finding plot team members to ask about the guild rules, and even bumbling through a couple of combats. I’ve been gaming for 17 years, but nothing prepared me for how involved this weekend would be.

The Alliance ruleset, when compared to tabletop games, is arguably fairly rules-light. There are very few randomizers in the game, and as such adjudication is based on actual human skill. Want to hit someone with a sword? You actually have to tap your target with your weapon, a ‘sword’ made with insulation foam and other soft, safe materials. If the player of your intended target is a fencer, you may be in for trouble, no matter what your character level is. Similarly, if you want to cast a spell in combat, you must first say the spell’s incantation (‘With Eldritch Force I Build a Prison’), and then throw a spell packet. The spell’s effect only resolves if the packet hits the target. In addition to the PCs and NPCs, there are rules marshalls to make sure everyone is playing fair and safe.

Even though I clearly didn’t know what I was doing, I never met anyone who wasn’t understanding and supportive. I had a lot of fun getting into character, and enjoyed hanging around the tavern as the guildmaster just as much as going out into the woods and taking part in adventures. Since the event takes place in real time with real people, there is an ebb and flow that is very difficult to replicate in a tabletop setting. And since the advancement mechanics are based around attendance rather than how many modules you participate in or sword strikes you make, there is a huge palette of possible characters. Every one of the PCs in the event this past weekend contributed to the flavor of the game, and helped steer the plot in an interesting direction.

There’s no doubt that LARP is an intense hobby, and one that some tabletop gamers may consider a ‘bridge too far’. If you are a gamer who likes the in-character side of role-playing, though, you owe it to yourself to at least investigate it. Alliance alone has over a dozen chapters throughout the US and Canada, and is one of many large LARP organizations. If you want to find out for yourself what this is all about, find your local chapter and inquire about joining an event as an NPC. The cost is minimal, and gear will be provided. That way, you can wait until you know you’re interested to start acquiring or making garb and weapons. My bet is that once you give it a chance, at the very least you’ll understand the appeal LARP has to so many people. And there’s always a possibility that getting a taste of the experience will make you want to sign on yourself. I’m strongly considering it.

Find out more about Alliance at their website. You can look for a chapter near you, or take a look at the rulebook. Also check out Faire Play, the game site in Pennsylvania where Alliance HQ games take place.

2 thoughts on “Level One Wonk: Live Action Role-Playing with Alliance”