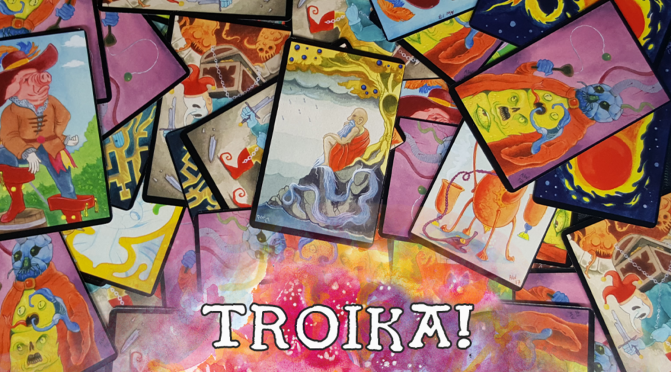 Imagine, if you will, that Douglas Adams and Terry Pratchett have returned from the dead. They both pile into a Ford Cortina and take a long drive across the American Southwest, pondering the nature of the fantasy genre. Once they arrive in California, they legally acquire several ounces of the finest cannabis sativa and hotbox the Cortina. Then they write an RPG. This, roughly speaking, seems to be what produced Troika, a delightfully simple and delightfully absurd game which recently published a second edition.

Troika is not a long game, clocking in at about 120 pages, but it manages to pack a lot of detail in its pages, mostly because the items, spells, backgrounds, and monsters are all doing double-duty as setting material. Every element in this game is tightly written and evocative, so as soon as you read them you’re immediately struck with not only what the thing is, but also how insane it is. Combine that with the fact that character generation is completely random, and it’s likely that your players will be surprised, delighted, and horrified at the party that comes out at the start of the game.

Character creation is straightforward: first, roll 1d3+3 for Skill. Then roll 2d6+12 for Stamina, and 1d6+6 for luck. After that, record some basic items and roll two d6s (called a d66 roll) to pick a background, which gives further skills and inventory items. We’ll get into the backgrounds, but let’s go over the three core stats first. Skill is the base level you have for any skill in the game. Backgrounds will give you more specific skills, which are simply additive to your base skill. As such, if you had a skill of 3 and a Pick Lock of 4, your skill total would be 7. You’d be aiming to roll under that number on 2d6. If you were making an opposed roll, you’d add that skill total to the die roll and compare, seeing which character got a higher result. Stamina is your damage track, and when you’re hit in combat, you lose stamina. If your stamina goes to 0, you die at the end of the round. Luck is a stat used for any vagaries of fortune that may befall the character; roll under luck to see if your character escapes their fate. The wrinkle here is that luck decreases by 1 every time you roll it, which means that your luck really can run out. Both stamina and luck can be regained by resting.

As implied by the existence of a solitary Skill attribute, Troika is intended to be fairly simple. The rules that do exist, though, are deliberate and quite elegant. Take initiative, as an example. Each character puts two tokens of unique colors in a bag, while the enemies contribute a number of tokens based on their initiative rating (with two being average). There’s also one more token, an end of turn token. The GM determines whose turn it is by drawing tokens out of the bag…but, if the end of turn token is drawn, turn is over. All tokens go back in the bag. If anyone was at 0 stamina, they’re dead. This degree of uncertainty as to when and whether you’re going to act makes for a very different combat experience than most players are used to, and definitely different than what most other games intend.

Combat actions are fairly straightforward. You can hit someone (though it’s an opposed roll and either side can win and deal damage), you can shoot someone, you can cast a spell, you can delay…and so on. The maneuver list is to the point, and the special circumstances rules fit on a scant two pages, while still covering grappling and drowning just fine. There are actually tables for each weapon’s damage roll, but in a flash of good sense, every table in the game is in either on the inside front cover or the inside back cover. While Troika is old-school in many ways, it’s design sensibility is compact and charming, and it doesn’t feel constrained by many of the norms put forth by D&D. This is a good thing.

Much of the rest of the book is taken up by lists of items, spells, and monsters. The context and real charm of these items comes from the implied setting they create, which is why I do need to go and revisit the backgrounds in more detail. That said, the writing taken on its own is also quite wonderful. Allow me to give the example of the spell “Posthumous Vitality”:

“Necromancers, known for their social inadequacy, often find themselves having to make friends. This Spell requires a fresh, or at least whole and lubricated, corpse.”

The rest of the description is just mechanics, but tell me that “whole and lubricated corpse” didn’t place a wonderful (or horrifying) image in your head.

There is one rule from the spell section that must be highlighted: the “Oops” Table. While I’ve gone on about magical mishaps and all that from various and sundry game systems, the “Oops” Table is a work of art. The wizard may turn into a pig, or accidentally reanimate all animals in a certain radius…including all of his leather goods and rations. And the writing…I just love the charm of it. Here’s an entry:

“The wizard becomes 20 years old. Today is their new birthday and they will feel terrible if no one notices.”

Monster stat blocks are incredibly simple. Monsters have higher skill ratings than PCs, because they don’t have advanced skills of any sort. They also tend to have lower stamina, both for balance and because PC spells cost stamina and monster spells do not. The most important thing to note, though, is that every monster has a 1d6 table for mien, allowing the GM to roll a die for a random attitude that the monster has. These are typically fantastic, and allow you to produce a dragon who is Quizzical or a goblin who is Overly Friendly.

I’m now heading back towards the beginning of the book to talk about backgrounds. The mechanics of backgrounds in character creation are simple enough: each background gives skills and items, and maybe a special rule. More importantly, what the backgrounds do in one fell swoop is instantly bring a character, and along with them part of their world, to life. These aren’t something like “raised on the streets” or “noble child”. Take, for instance, background 61, the Thinking Engine.

“Your eyes are dull ruby spheres, your skin is hard and smooth like ivory but brown and whorled like wood. You are clearly broken, you have no memory of your creation or purpose, and some days your white internal juices ooze thickly from cracks in your skin.”

Damn. The background in this case also has some special rules for being some crazy sort of golem. But on the other end of the spectrum, you have background 36, the Monkeymonger.

“Life on The Wall is hard. One is never more than a few yards from an endless fall yet those precarious villages still need to eat. This is where you come in with your Edible Monkeys (the distinction is purely for appeal since all monkeys are of course edible). You used to spend days on end dangling your feet off the edge of the world, watching over your chittering livestock while they scampered hither and thither, but there was no future in monkey meat. You wanted much more and so stepped off. Or you fell off. Either way you and some unlucky monkeys are here now and that’s all that matters.”

All 36 of the backgrounds (d6 times d6, of course) are this evocative at least, though you have monastic orders, tragic backstories, and more strange races thrown into the mix. This clearly illustrates the beauty of the worldbuilding within Troika. The world of Troika is one with many touchstones, at least one for every background. With a party of, say, four or five players, you’re going to get a mix of these touchstones. And how you make all these parts come together is going to change with every possible party permutation. Troika has accomplished the delicate goal of both making the players enter the world written for them and at the same time letting them define what that really means. And it doesn’t hurt that the writing of that world is delightful.

Troika is not a complicated game. Its rules are simple, its characters are written quickly. By embedding a lot of the details of the implied setting into mechanical elements, it’s hard to avoid the charms of the writing, either when you’re fleshing out a character or when you’re the GM fleshing out an adventure. The system, distilled as it is, throws in a lot of randomness, and the game as written isn’t particularly bothered with the degree of lethality put forth by its mechanics. Fortunately, the setting aligns with a place where fortunes shift like winds, and character death seems rather (ahem) in-character. If you’re looking for a charming game, or an old-school game that isn’t D&D, I strongly suggest Troika. There may not be enough depth for a prolonged campaign, but the lovely nonsense of the setting is somewhere I want to spend at least a little time.

The most recent, Numinous edition of Troika is available on DriveThruRPG.