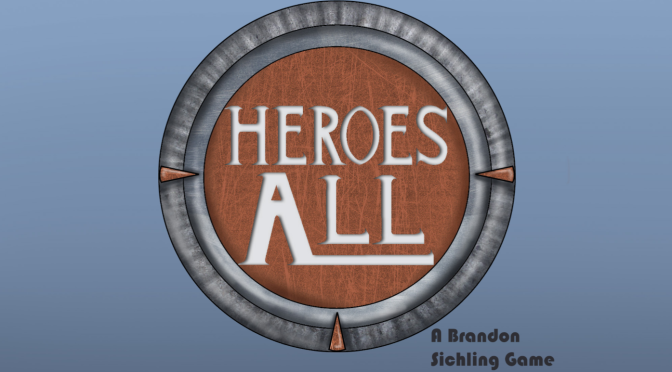 Superhero stories are at their most interesting when talking about conflicts that aren’t easily knocked down with super-strength or a utility belt of gadgets. The most memorable superheroes across every continuity are those who are both relatable and who must struggle to earn their victories. As our readers have seen with Seamus’s High Impact Heroics Adventure Log, there are newer supers games like Masks which do a great job of emphasizing the human aspects of the superheroic. Cut from a similar cloth is Heroes All, a new game by Brandon Sichling. Heroes All is built around the core conflicts that make or break a superheroic character. By pairing the creation of an antagonist with the player’s protagonist, Heroes All creates an immediate conflict for every player right out of the gate.

The core mechanic of Heroes All is a power system which has some parallels to the dice mechanics of Cortex Prime. Each power that a character has is rated by a number of dice, in sizes ranging from d4 to d100 depending on the power level. As the player uses these powers, the dice gradually step down until the power hits d4, not exhausted but also not terribly super. This power exhaustion mechanic would normally be a bit punishing, but with character-driven recovery scenes it becomes part of the game to plan out your power usage over the course of a session. The intent here is pacing, and power usage which isn’t considered stressful or isn’t directly challenged by the antagonist doesn’t use up your dice.

So how does this actually work out in practice? There are intended to be three scenes per character per session, and this number is essential for both power balance as well as progression. For each scene, there is the Protagonist, one of the heroes, the Antagonist, created alongside the Protagonist and played by the person to their immediate left, and then Supporting Characters, who can be key NPCs in the scene or other Protagonists if it’s relevant. This doesn’t seem to cast the Protagonists as a party, per se, and mechanically it really doesn’t. What player character cohesion that does exist is achieved through the rule for replenishing powers, which requires a scene of conflict between two PCs. Conflict is relative here; the examples in the text tend to be of heroes who disagree about their next course of action. The intent is to have scenes which link your characters together in order to keep powers available and useful.

When it comes to playing the core scenes out, the mechanics are fairly straightforward. A typical scene starts immediately putting Protagonist and Antagonist at odds with each other. Interestingly, rolls aren’t assumed to be contested; rather, one character does something with an impact determined by a die roll, then the next chooses an opposing action with an impact determined by a die roll. The sequence of rolls continues either until there’s a stalemate, a victor, or even that things are starting to get repetitive. While there is a lot more die rolling, the intent of the scene structure is akin to Fiasco, where half a dozen or so superheroic actions between the two characters are strung together to determine how the scene goes and who is favored with the outcome. While this is happening, the other two (or more) players who are neither a Protagonist nor an Antagonist can play supporting characters, and throw in some dice in favor of or opposing either character’s rolls. These supporting characters could be other protagonists, but they don’t have to be.

In terms of mechanics…that’s pretty much it. You create a character with powers (suggested starting dice are 3d6 worth of more ‘super’ powers and a 1d4 more human ability), an antagonist of the same power to counter, and go to town, creating supporting characters as you need them. The GM’s advice emphasizes that this is an improv-driven game. Instead of an absolute threshold for success or failure, the GM (here called the Editor) is advised to describe an effect based on the value of the die roll, and then determine what happens based on the relative value of the subsequent roll. The strongest pieces of advice given here are to answer the questions raised by the die rolls with ‘Yes, And’ or ‘No, But’, and then provide more detail to drive the story forward. The rules are intended to be light and mutable to get scenes to play out and then still fit in to what a particular group needs. It doesn’t end up being as binary as Fiasco, but the scene structure does mean that a session will end up with that more broken up, staccato feeling as the emphasis jumps from character to character. And like in Fiasco, the scenes playing out are more important than any mechanics which determine exactly what happens.

So what else is here to make these scenes interesting? The game provides 12 different archetypes to describe different hero classes and gives the characters dice in these archetypes which can be used for doing something particularly in-genre. Each character starts as a Hero, but as the game progresses they can move through archetypes as presented in a flowchart within the book. You can find yourself becoming a ‘Gritty Vigilante’ and moving on to ‘Grimdark Antihero’, or you could be more of an ‘Everyday Hero’ who, if they aren’t careful, becomes a ‘Bookworm’ who is metatextually aware of the fact that they’re in a comic book. While these Archetype Dice are limited to actions which are specifically in-genre they don’t run down like the Power Dice do, granting a powerful way to guide your particular hero’s actions and choices.

There is yet more here for establishment, with the game providing six setting seeds which run through an alternate timeline for a superheroic universe. While these eras aren’t quite as concretely defined as the ‘ages’ in Masks, they each offer a potential setting seed and some fit back to the Hero archetypes quite nicely. ‘The Supersonic War’ is an alternate World War II where superheroes took on the Nazis, saving Europe. ‘Legitimate Business Monsters’ is the story of two crime lords in the 70s, albeit with some monsters thrown in to make the gang war that much more interesting. ‘The Coldest of Wars’ is a pastiche/parody of comics in the 80s, taking place during the Hyper Olympics on Pluto and involving something called ‘supercrime’. ‘Chromatic Scales’ is an allegory for the height of the drug war in the 90s, but one that involves a drug that turns its users into “rainbow-scaled snake people”. ‘The Middle Children of Night’ is a more meta scenario, where comic book continuities are dusted off and used in different, more experimental ways. And finally, ‘The New Xenorealism’ is an imagined era where everyone has superpowers, and by necessity the conflicts become more mundane. As is somewhat implied in the text, these setting seeds are imagined to be eras in a hypothetical comics publisher’s output, and are described both broadly and in a very meta way. This approach jives with how the protagonists work together because, at least at the outset, the protagonists don’t have to work with each other. The game is less ‘Justice League’ and more ‘Marvel Cinematic Universe’ where each protagonist has their own story but ends up finding out, alongside the readers/audience, how these stories are linked.

Ultimately, ‘Heroes All’ is about telling superhero stories as we’ve been consuming them. There may be one hero in focus, but as we’ve become accustomed to, there’s a whole cast of characters who are important to the story. The game is quite light on mechanics, but the structures that are provided, driving sessions scene-by-scene and making each scene either about characters or about conflict, help to push characters in a given narrative direction and give opportunities for the characters to become more tightly linked naturally instead of pre-writing it. If you’re interested in a more narrative take on superheroes, where Captain Marvel can sit next to Spider Man: Homecoming in the same continuity, Heroes All might be a great game to do it with.

Heroes All is available on DriveThruRPG.