In 1994, Richard Night had a vision for a new modern city. By 2009, that vision had gone awry, and what was supposed to be an urban utopia became an urban hellhole. As Bes Isis once said, “Nobody leaves Night City. Except in a body bag.”

On Christmas Eve, 2019, four enterprising RPG bloggers found themselves at a strange conjunction of parallel dimensions. Whether it was their campaign worlds, their characters, or Aaron’s insistence on reviewing Fate of Cthulhu while writing a time travel game, no one could say. Nonetheless, when they stepped through the strange, neon-colored portals that appeared in their respective homes, Seamus, Aaron, Aki, and Jason could not be less prepared for what lay on the other side.

Fortunately for them, and for us, they had one tool to help them step into the role of their dark future doppelgangers: the Lifepath system from R. Talsorian’s Cyberpunk 2020. By looking through the major events of their last six years, each of our erstwhile authors would be able to figure out how best to take it to the edge in the dark future. You thought running an RPG blog was tough? Just you wait: it’s Cannibal Halfling 2020. 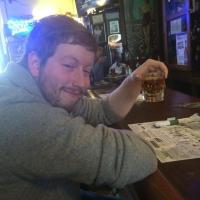 Much like his role at Cannibal Halfling, Dark Future Seamus is all about getting deals made, and reaching out to the right people. In this timeline, however, he’s using backalley police contacts to help him fish out corruption and help his team uncover dirty dealings. In 2015 he got married, suspiciously like what happened in real life, but then disaster struck. Someone had been making noise about corporate corruption and monopoly power, and it was Seamus’s name on the check. Thrown in jail with his rabblerousing companion, it was then that they knew they had to stick together. Team Cannibal was born, and they were able to get out of prison on a technicality. After that, it was time to go to ground and build. Seamus found familial connections within the ranks of the local mob, an artifact of the corrupt nature of Night City’s founding. Through his mobster cousin, he was connected to a local expert of “shooting shit real good”, and it was time to move. Someone was watching, though. The “accident” involved a whole lot of thermite for a residential neighborhood, and Seamus was trapped under a house that collapsed as they fled the fire. While he was dragged to safety, Seamus was in a coma for two weeks and couldn’t remember the previous eight months. The connections he had made were coming out of the woodwork, though, both to pay up and to collect. Team Cannibal couldn’t stay still for a second.

2014: Made an enemy: a childhood enemy, I stabbed their eye out, they’re coming after me to kill me alone

Dark Future Aaron was never one to let sleeping dogs lie. In what was supposed to be a friendly nostalgic catchup with a friend from high school, he made the headlines when, in a fight that started when the friend said “D&D is the only RPG worth playing”, Aaron stabbed him in the face with a d4 he happened to have in his pocket. The d4 is the lowliest of the damage dice but still managed to gouge out the dude’s eye. After that, Aaron tried to lay low, having a dating life that moved suspiciously parallel to the real world while also sending incendiary missives all over the Net. His primary source and paymaster was Seamus, which came to bite them both after one of his articles, “Maybe…Don’t Pay Arasaka Protection Money?” got him in so much hot water that the DA was bribed to dredge up the d4 assault case. He was thrown in jail, and eventually Seamus with him. In jail they formed the idea for Team Cannibal, got themselves out on a technicality, and got to work. It was here that he got mixed up in the dealings of Raven Microcybernetics, at the same time that none other than Jason was reverse engineering some of their technology. Through this connection Aaron welcomed Jason into Team Cannibal, where he could provide more deep knowledge to help take it to the edge. He was able to make friends with another investigative journalist who was on the more local beat than Aaron (and had more experience, to boot). It was here that he was shown a local feud that had started when Aki, man of the gun, had had the audacity to date someone from the wrong sort of (crime) family. Aaron saw an opportunity, and Team Cannibal was complete. This didn’t come a moment too soon, as the “accidental” attempt on his and Seamus’s life had left Seamus with memory missing and Aaron as the de facto leader. It’s none other than Thompson who Aaron runs into in a bar, and the infamous media helps guide Aaron into making his plan for a comeback/revenge that will make Team Cannibal a name that causes corporates to quake in their boots.

2015: Made an enemy: a former friend whose plan you foiled (curses!)

2017: Made a friend: an old childhood friend

2018: Love Affair with Problems: Their friends and family hate you

Dark Future Aki keeps to the shadows, popping in when he’s most needed. He was so good at keeping a low profile that, when he wasn’t sniping from rooftops, he was a man about town, making friends. Early on in his career he caught the attention of Kestrel, another Night City solo who kept an incredibly low profile after a number of incidents in her past. She watched over Aki and made sure he didn’t step on too many toes…at least not of those he wasn’t planning to shoot later. He did aggravate the plans of a friend of his who was going after some other local edgerunners, but even that friend didn’t stay mad at him for long. When the relationship became amicable again, the once-friend-then-enemy-now-friend-again told Aki that he was wrong about the two edgerunners he was going after, and that in fact Aki should keep an eye out for them and where they were going. These edgerunners were, of course, Dark Future Seamus and Aaron, who had just gotten out of jail and founded Team Cannibal. Around then, though, things started to go wrong. Like many who are good at making friends, Aki had had some good luck with romance…but his paramour’s family (and most of her friends, too) were all deep into organized crime. Not a good look for Aki, and it made things tense. Here, Aki’s observation of Team Cannibal got personal, as Aaron came out of the woodwork with some information to help him navigate the mob scene. As Team Cannibal was low on firepower, and Aki low on consistent work, the team had a new member. He didn’t go shouting this from the rooftops, though, and he met a new drinking buddy from the NCPD just as the team was looking for leads on who had attempted to assassinate Aaron and Seamus that night… 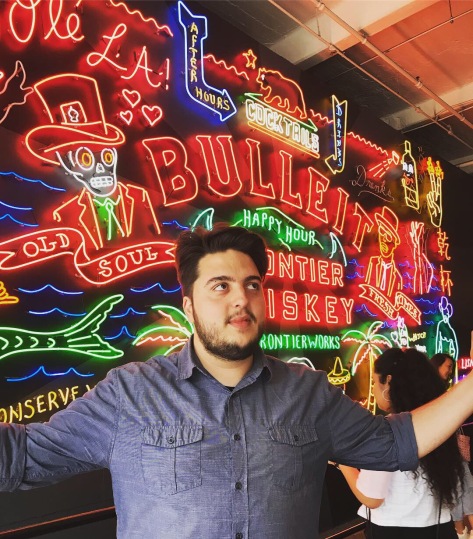 2017: A powerful corporate exec owes you a favor

2018: Made an enemy, a powerful corporate exec, you turned down a job offer

Dark Future Jason got into technology when his refusal to use any technology more than two weeks old gave him the opportunity to cash in on a massive bug bounty from Zetatech. With his extra infusion of eurobucks he was able to cover the tech beat better than ever before. Even so, his desire to keep any controversial opinions to himself eventually gotten him a reputation of being a corporate sellout, an undeserved one. Nonetheless, Jason pressed on, trying to find connections when the tech community was shutting him out. Reconnecting with his uncle, he got some inside information on potential shifty intellectual property shenanigans going on at Raven Microcybernetics. He scored some cyberware to reverse engineer, and in the process met Dark Future Aaron, who was attacking the rumors from an interview approach. The two liked each other’s methods, and Aaron invited Jason to join Team Cannibal. The investigation was successful, but Raven’s CTO was able to buy their silence with a favor. As Jason became more involved with Team Cannibal, this favor turned into a job offer, which Jason knew was a slightly different approach to buying his silence. He turned it down, and made a powerful enemy. Of course, with the issues that Jason and Aaron uncovered still on the table, the CTO had no way to get anyone at the corporation to help him with this vendetta, or so they thought. Just as Jason thought he could balance being part of a team of edgerunners with doing something normal, like dating, the news of the assassination attempt and Seamus’s injury made its way from Aaron. It was time to act, before the corps could strike again.

As Seamus mentioned in his recent article, we’ve been at this for three years now. This has been quite a ride, though maybe not as dramatic as the one that our lifepaths above indicate. As we enter 2020, I like to believe that we have more clarity about what we’re doing and how we do it, and we might have become better writers along the way, too. While the four of us have kind of coalesced into a core team, Cannibal Halfling owes a lot to all of its contributors, not just the ones able to contribute the most time. Ari, David, Magdalen, Geni, and Jimmy are all part of the site via what they’ve done for us, and we would be lesser if you weren’t here. This little bit of Cyberpunk 2020 tomfoolery is here for two reasons: first, of course, because real life 2020 starts in one week, and the Cyberpunk RPG community is here for it. But second, and more importantly, because it’s a fun way for me to say that I think we are turning out like the characters in our best campaigns.

In having a year-end celebration, regardless of how silly it is, it’s always important to remember that the people who have brought us here, more than anyone else, are our readers. And so, to our readers, and all the gamers who are readers to be, I say this: No matter where you are or what you’re playing, I hope that 2020 is good for you. May your future adventures always outshine your backstory.

Thanks to Geni for the header image!