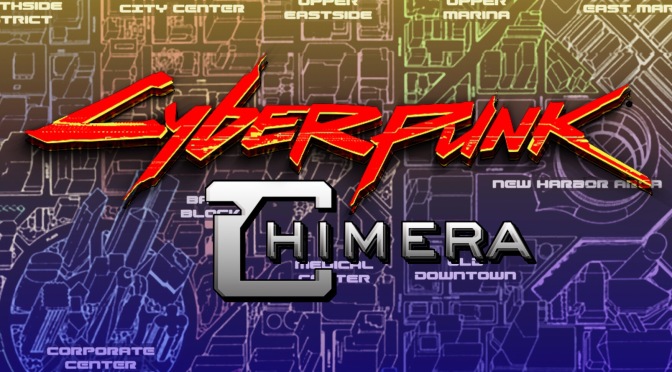 Welcome back to System Hack! Now that the real timeline has caught up with Cyberpunk 2020, it’s time to start pinning the Cyberpunk Chimera down. We have attributes and skills, we have ideas about a combat system, and there’s some hacking, some cyberware, and even some meta-mechanics. What don’t we have yet? Oh. Right. Characters.

Character Creation is the locus of a lot of important decisions in a roleplaying game. While you’ve written mechanics to operate across a statistical range, it’s your character creation system that defines where your characters start. You may have an idea about whether you want your game to have gutter punks or a corporate hit team, but it’s the character creation system where the mathematical rubber hits the road.

Character creation in Cyberpunk 2020 was nothing to write home about, for the most part. Attributes were randomly rolled or points were assigned, and one of these methods worked better than the other. Skills were distributed out of two pools, one fixed career skill pool and one variable “pickup” skill pool. The class-defining Special Abilities were also picked out of this career skill pool, and making one skill objectively more important than all the others was a choice of questionable merit. Still, as faulty as this system could be, it was extremely modular, and figuring out how to make your own classes and tweak things at this stage was very easy.

Clearly, I want to preserve some element of the Lifepath system from Cyberpunk 2020. At the same time, the attributes and skills logic of 2020 doesn’t even apply to the system we’ve rewritten, so that has to come from the ground up. Fortunately, looking back at our attributes and skills, there’s something very handy with some of the design choices we’ve made. Thanks to a small list of skills and an even smaller list of attributes, we can start tying character picks here directly into a lifepath-style system.

If you recall from our earlier work on attributes and skills, there are only three core attributes: Physical, Mental, and Social. In a Cyberpunk game where your meat isn’t special, it makes sense to have the baseline attribute spread be three average values. If you recall from the attributes and skills article, this would be (d10 d10 d10). From there, it would also make sense that having one above-average and one below-average attribute would also be reasonable. That would be a spread of (d8 d10 d12), where the d8 is above-average and the d12 is below average. There are six possible spreads in that form: for each of the three attributes, there are two spreads, one where each of the two remaining attributes gets the lower die.

You may have noticed that I attached some high school stereotypes to these attribute spreads. There’s a reason for that: our time in school is the most important (and last, usually) time of our lives when our innate differences in capability matter. By the time you’re in your twenties, the innate differences between you and your peers are hidden by years of acquired skills and experiences. Similarly, in our character creation system, the attribute array you pick is going to send you on a path of specific childhood and young adulthood experiences.

If we’re going to tie mechanical decisions into backstory decisions, we have to make sure that the decision points make sense, and that all decisions lead to viable characters. For this reason, we should ideally have a fairly limited number of decisions that each give a bundle of complementary skills and abilities. We also need to figure out how to give these decisions depth.

In Dungeons and Dragons, when using the standard array, there’s usually two, maybe three ideal builds per class. While there are more permutations than that, given the way prime requisite attributes work in D&D, it’s accurate to say that each class has somewhere between two and three good builds and, therefore, between 717 and 718 bad ones. If you want to argue with me, go build a Bard with an 8 in Charisma (there are 120 Bard builds with an 8 in Charisma and they all suck). Still, that shows the importance of both the illusion of choice as well as the hazard inherent in linking mechanical and narrative decisions. Even if there’s only three attribute spreads that will really work for your paladin, that in no way means there’s only three possible paladins to build; there are so many other choices, most of them non-mechanical, which make the character unique.

Knowing that, I don’t want to write skill “decision points”. Instead, I want to write character hallmarks, elements which tell us about the character and help build the character in our minds. Then, we tie skill buys to them. My examples up top are woefully incomplete, in terms of Cyberpunk childhoods. What I could imagine doing there is, instead of having six archetypes, narrowing it to three. Then we’d have versions for what we could imagine are other upbringings. Sure, for the corporate high school it’s going to be jock, nerd, and socialite. For the public high school maybe it’s tough, suck-up, and ringleader. Maybe for the street life it’s runner, script kiddie, and con artist. From there, a key life event can be linked to adolescence, and that life event defines which of your attributes is lower (not because the event caused it to be lower, but because the event highlights the deficiency). Then, we hand everyone their first die in the six skills which basically everyone can do: mobility and strength for physical, perception and cool for mental, and empathy and socialize for social.

For further skills, let’s hand out twelve additional dice. If we let someone assign them as they wish, that would allow a character to have rudimentary proficiency in almost every skill (the revised skill list has 19 entries currently). Of course, we aren’t going to make it that freeform. While we defined the attributes of the character based on events in adolescence, skills are going to come from prompts that help a player flesh out the character. One set of prompts will represent late adolescence, the high school period (I promise I’ll come up with better names for these time blocks), while the subsequent set will represent young adulthood, from 18 to 22. If this all sounds too young, remember that the oldest a Cyberpunk character could be, rules-as-written, was 28. I’m imagining that for each set of prompts there will be three items, a person, a place, and an event. This will mean six prompts, and therefore mean each prompt will require the allocation of two dice. Now, this could be a multiple choice deal for the dice themselves, but that’s too restrictive. Instead, what I’m imagining is that each prompt will have a set of choices (probably ten, we’re already using d10s) that detail out what sort of person, what sort of place, or what sort of event the prompt is about. The prompt then requires that the player add some necessary detail, and then choose to allocate the dice based on guidance. So if a character’s first ‘person’ is a mentor, the guidance might be ‘put a die in the skill your mentor taught you directly’. Then, if we want to get Zen about it, the second piece of guidance could be ‘put a die in the skill your mentor taught you indirectly’. Since we have so few skills, making sure each one comes from somewhere and helps form the character is key (we want to do this with advancement too, but that’s a whole other article). Of course, the ‘people’ may be NPCs and the ‘places’ may show up in the GM’s setting, but that, mechanically, is straightforward. Speaking of mechanics, we may restrict some of the die placements, like requiring that three out of the six dice in the final stage go into skills which already have dice in them. Those more granular decisions, though, are hypothetical at the moment, and would be better informed by playtesting.

There are of course other details to consider. The prompts described above may be fleshed out with other items to give the player a handle on the character’s motivations. We’d need to figure out what gear the character starts with, and cyberware, if any. Also, organization and geography, while not yet mechanically defined in the bounds of Cyberpunk Chimera, are going to come into play as well. Still, by making the core character creation method one which intertwines narrative prompts about the character with mechanical allocation, we get a lot of the intrigue of a lifepath system without depriving players of choice. Of course, there are mechanical allocations going on in the background, and you could just tell players to put one die in each of the six core skills and allocate 12 others to their liking…but that doesn’t produce an interesting character. Does it work for NPCs and the like? Of course. But players should go through the process which helps a more fleshed out character come out the other side.

The character creation process we’ve begun to sketch out here aligns with some philosophies of the Cyberpunk genre which I want to highlight in my design. Neither attributes nor skills are going to make you stand out, and the level of allocation makes that clear. This does mean that the things that make characters potent, namely their connections, resources, and cyberware, will need more development. At the same time, using a prompt-driven system gives players more opportunities to make their characters unique, even if the system which we currently have sketched doesn’t allow for much in the way of mechanical differentiation. This once again falls back to some of the ideas about how a Cyberpunk game should run as espoused by its designer: there’s always things to spend money on, and the characters are always running away from their enemies and towards the next big score.

With character creation sketched, there are three big gaps remaining in Cyberpunk Chimera as I envision it: Gear and Resources, Organizations, and Geography rules. Incidentally, those are the last three articles I have planned. By the middle of 2020, the Cyberpunk Chimera outline will be complete, and it becomes time to figure out how to turn these outlines, discussions, and sketches into a more cohesive whole. I’ve already begun this work; this article is the first in the series to allude to the fact that I’ve taken the ideas from earlier articles, edited them, and begun to build actual mechanics out of them. There isn’t a game there quite yet, but starting now I truly believe that we have a singular entity with gaping holes in it, as opposed to a bunch of unattached pieces. If this project has held your interest in any way, be sure to drop us a line, either here in the comments or on Twitter, either for me @LevelOneWonk or the whole team @HungryHalfling. I’m always looking for suggestions and feedback…and as it turns out this game needs a name, ‘Chimera’ is already taken! Thanks for reading, and I hope to catch you again for the next System Hack!

Want to check out more Cyberpunk Chimera? We’ve got all the articles tagged and easy to find.