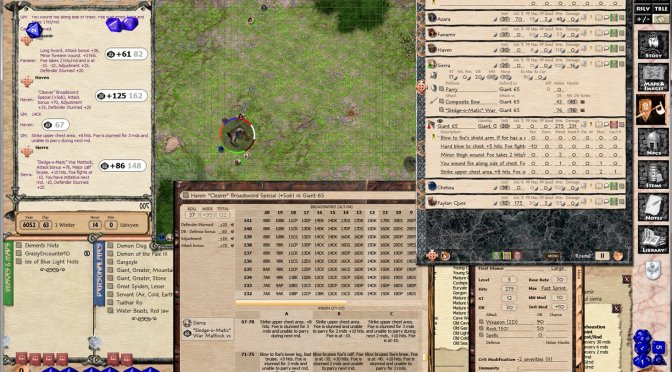 Are you a Butt-Kicker, a Specialist, or a Story-Teller? There is a huge world of games out there to satisfy every player’s and group’s style. And while there are academic discussions in every corner of the internet, sometimes it’s best to start at level one. Join the Level One Wonk in exploring the possibilities that RPGs have to offer, from Aberrant to Zorcerer of Zo. Today we talk about moving your game into the digital realm, and running a tabletop game online!

The platonic ideal of a gaming session has not changed in over 40 years: get some friends around a table, order some pizza and break out the drinks, and then spend 4-6 hours together rolling dice and having an adventure. One of the reasons many of us have our fondest gaming memories during middle school, high school and college is that these are the times of our lives that gaming like this is easiest: everyone has similar schedules and levels of responsibility, there are tons of places to meet, and everyone is more physically tolerant of staying up into the wee hours of the night to finish a particularly gripping session.

As we grow older, it’s harder to find a group of gamers who can all meet in the same place at the same time. It’s also very difficult to keep in touch with a gaming group you’re particularly fond of, especially if you all met in high school and college and are now scattered to every corner of the Earth. Fortunately, the last 5-10 years have seen significant development in the tools and software necessary to play online. While online play has existed as long as the internet itself in the form of play-by-post and play-by-email games, there is now enough bandwidth and software support to have a close simulacrum of an actual gaming session via your computer.

While something like a play-by-post forum game is an entirely different animal than a typical gaming session, playing online using audio or video chat programs ends up working in a similar way to playing at a table. The key in having a successful game is both understanding what’s going to work differently and adjusting for it, as well as understanding what’s going to be the same and not messing with it too much.

When you are playing online, even if your entire group can use video and you have a dedicated feed to a game table (some Twitch streamers have setups like this, I can only dream of it), you’re still all playing in different locations with different distractions. The flow of the game is going to change, and there will need to be style changes to compensate for it.

First, there are a lot of behavioral cues in live gatherings that disappear when you’re online. Video helps, but only to a certain degree. Keeping people from talking over each other, not always easy in person, becomes much more difficult when remote. There are software strategies used in business meetings, but because group conversation is such a big part of the gaming experience, trying something like line muting is unwieldy at best. At worst, people think you’re trying to silence them if you don’t set ground rules. To make it more complicated, free programs like Google Hangouts don’t have great tools for line management compared to professional conference software like WebEx and GoToMeeting.

As a GM, taking a proactive approach to session control is critical. First, when there’s an in-group conversation, step back. In order for any management strategy to work, there needs to be time when everyone can talk and not have to fall in line. That said, during these free planning times, pay attention. Just like in an in-person game, you need to listen and see if there are people going unheard, or if there are people dominating the conversation. When it comes time for an encounter, that is when you ensure that one person talks at a time. Just like in an in-person session, call on your players by name, and as much as possible don’t let people talk out of turn. Once the encounter has resolved, go back to the more relaxed mode.

For broader game planning, scheduling will somehow be more difficult. When people put things in their calendar, turning on the computer and joining a group chat will, for many people, fall below in-person engagements on their list of priorities. This may not be true for everyone, but in my experience people who would otherwise be reliable can’t seem to get their schedules in order for online gaming. To counter this, you need to employ strategies that are effective for any regular gaming group but more essential when playing online. First, run games where absences are tolerable. In an in-person game, you can easily go do something else if one person is missing on short notice, like play board games or watch a movie. There may be similar options online (hey guys, let’s go play Destiny), but you still will lose more momentum than you would in-person where there is still a gathering occurring. It’s better to game without a person than not game at all and make it more difficult to pick up later. Even if you absolutely cannot run without the missing person, having a back-up game or one-shot ready will help preserve the gathering time.

And that goes right into the final word of advice: have a consistent time. For my online group, that’s Sunday at 11. You can shift one hour back or forth if you need to, but the minute you’re trying to get a four-hour gathering together on a different day of the week each time it stops working. Once again, this is partially psychological: I’ve been in in-person groups where the best day that week was determined on a week-to-week basis, and it worked fine. Every time I’ve seen it tried online, attendance eroded to nothing within three sessions. Make it a consistent time, though, and you tend to get a consistent number of players.

What Stays the Same

Ultimately, the most important thing to consider about running a game online is that your habits as a player or a GM need to be translated, not changed. If you like using published character sheets, find a form-fillable PDF. If you like character generators and calculators, they’re probably already online. If you as a GM like drawing maps, you can either continue drawing them by hand and scanning them, or draw them with a software program.

Remember that the online tools available are there to facilitate playstyles you already enjoy. I learned this the hard way the first time I loaded up MapTool back in grad school. MapTool is an immensely powerful open source tool, and if you like drawing and running with maps you can do a lot with it. I do not like drawing detailed maps, and the idea that I needed to use all of the feature set of MapTool was both intimidating and, more importantly, not all that much fun. Now, if you’re a map guru you may love MapTool or its newer and more user friendly (though more expensive) companion, Roll20. I use Roll20 for my games now and find it very useful, but other than the dice rolling and quick sketches on the provided grid, I leave most of the tools alone (this also has the benefit that the free version of Roll20 does everything I need, whereas to get the more advanced scripting features you need to subscribe).

On the other side of the coin, there are more fully implemented software tools like Fantasy Grounds and the recently announced D&D Beyond, which are designed to more fully bring your game into the digital world. With sourcebooks, combat calculators, dynamic character tracking and all sorts of other features, software like these packages make getting into the game a lot easier. The trap you can fall into here is being seduced into doing less prep, and letting the software shoulder all the burden. With so much of the system fully implemented, it’s easy to get a little lazy. To be fair, if you’re using a fully implemented module in something like Fantasy Grounds, a lot of the work is being done for you, but you still need to be the GM. The computer can load up all the maps and have the stats of every encounter cached in memory, but the person running the game makes things come alive, and is the one who makes the session more interesting than going back to play another four hours of Skyrim.

My recent gaming history is nearly all online. I met Mr. Cannibal Halfling through an online game, with a group that still meets weekly in a Google Hangout some seven years later. Most of my advice for running online comes from experience, namely mistakes that I and other GMs made and still do occasionally make. If there’s any broad takeaway here, it’s that running a game online doesn’t change what you like and what works for your group. Once you hash out scheduling and get communication down, your game should feel similar to one you’d be running at a table. After the basics are solid, you can bring in more software, try recording the sessions, and any number of other things that the magic of technology allows you to do. Before you can start trying new things, though, make sure your group has made a comfortable transition into the style of slinging dice you already know and love.