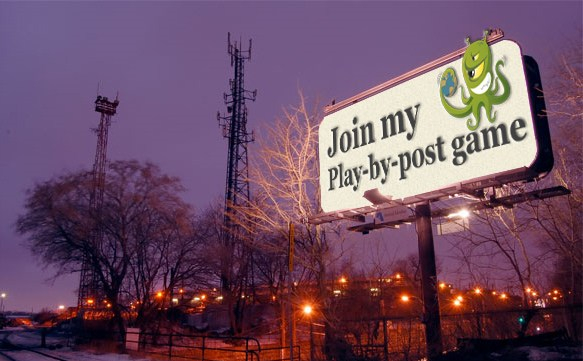 Back a decade ago, in 2008, I was fascinated by Code Geass, a mecha and fantasy anime series. While looking around I found a forum with people creating their own stories, imagining themselves on different sides of the conflict and imagining their own strategies. I had seen roleplaying threads on other internet forums, but this was something different: an entire board, devoted to making a game to be played. Rules were pretty much non-existent, other than the admins and mods making pointed suggestions, and rewarding players who played out uncomfortable or losing scenarios or roleplayed richly. There were no game mechanics. But I had found my first Play by Post. For me, the roleplaying and storytelling aspect of gaming was the best part and it was often overlooked at my school’s gaming club and the few sessions with friends. This was all about the story, and through that I met two of the people I game with now. As a note, driving out of state to the house of someone you’ve only known online, and not telling people where you are going might not be the safest idea, but it’s how I met a really cool group of people.

For as long as there has been games, there has been struggle to connect with friends and rivals to play over vast distances. There are historical records of chess matches played over correspondence between merchants since the 17th century, and there are stories of matches via courier even earlier. Yet, for games that are based on collective storytelling, such as most RPGs, sending mail to tell that story is ineffective. This changed as the internet era flourished, especially in the late 90’s and early 2000’s. With the relative ubqiquity of email and especially with online message boards there was now a way to keep a story going with greater detail, and ways to have other players be part of that conversation over long distances.

Most of the Play by Posts I have encountered are rules light. This was partially because the emphasis focused heavily upon storytelling given the format, but also because it was more difficult to work the dice mechanics into the game without a high degree of trust. This has been mitigated with dice roller webpages, formerly with Invisible Castle and now with Orokos, where rolls can be logged and recorded. Orokos is especially useful in that you can record each character and campaign that it goes to, which takes out a lot of temptation to try to cheat by trying to roll until you get the result you want.  There is also added benefit in that, because actions are entirely by text, it can be easy to go back and check details, remember NPCs, and look for clues about what happens next.

So, for all of these benefits, my personal experience had seen it dwindling in use in recent years, with players I knew more hesitant to use it. Why is it harder to bring people together for running one? Well, I see a few reasons. First is that, as connectivity and streaming has increased, it’s become increasingly easier to run and play tabletop games in real time, using video and voice services such as Skype and Google Hangouts in conjunction with online dice rollers. Roll20 especially had a huge impact as a way for players to voice chat, do dice rolls, and to provide maps and grids for players to use for physical representations. It was a major step forward for people who wanted to try to play a more traditional style of tablestop, even if it required paying a fee for the higher levels of membership and full functionality. There is a more recent addition in Discord, a browser and software platform which has emerged as a combination of chatroom, voice streaming, and easily integrated dice roller programs to be an all in one (though sometimes glitchy) package. So, for those with a computer and reliable internet access, distance is considerably less of an obstacle to gaming than it was ten years ago.

But there are unique issues that the format faces as well. While it succeeds at bringing people together to campaign, it also brings all of the issues that GMs and players face while playing around the table, but with the challenge that you aren’t physically there.

A common problem with normal tabletop campaigns is when you have one player who winds up stealing the spotlight: jumping into the middle and controlling every combat, interjecting themselves into other player’s plotlines, and in general making the story about themselves at the expense of other players. While it is definitely an annoyance sitting around the table, it enters a new realm of difficulty in a Play by Post. For one thing, the GM isn’t around all the time. Even as active as a GM can be, in a PbP players can post at any time. It is simply impossible for a GM to keep a watchful eye on the situation every moment of every day, and the same goes for the players. While other players might have difficulty standing up to a fellow player who is stealing their scene in a normal setting, the issue is compounded may times over when some players only have a few hours-long blocks to post each day due to work, school and family. Those who had the availability and the bent could push into a lot more with less authority to stop players. On top of that, GMs would (and should) be careful about the way they ask players to post less. In a PbP board, you want players who could post often and with a lot of detail, as it fills in the world and the scene. Forcing guidelines about post size could cause issues for players who are otherwise interested, but don’t fit perfectly into the box.

A related issue is God Moders and Metagamers. As I mentioned before, most of the games that I played in were rules light in the extreme. Without mechanics, players in these systems rely heavily on etiquette and gentle GM nudges. In many cases, GMs would confer rewards on players based on handling situations in ways that weren’t always favorable to them, whether it be extra xp or being fast tracked on being integrated into the plot, or given rank by organizations within the story. While this works for a lot of people, there are always a portion of players who just want to God Mode. Somehow the enemy attack just barely misses them, even though they didn’t see it coming, just because they are that badass. They totally are able to charge the sniper on the ledge 20 feet high, because of course! They love to embody the Randian quote, “The question isn’t who is going to let me; it’s who is going to stop me.” And, if you don’t have an active GM, the answer is very frequently “nobody.” This issue is pretty straightforward: it’s usually easy to identify, and it can be solved with an active GM speaking up and laying down the law.

What is tricker to deal with is metagaming, which is something that players can come across in all forms of gaming. Sometimes, it can be as simple as the fact that you’ve read the Monster Manual, and you know the weakness the boss monster has even if your character would have no way of knowing. Sometimes, it’s familiarity with the GM, where you realize that he’s introduced an old character from another campaign as an NPC and you the players knows them, even if your character doesn’t. It’s a tricky situation that even well intentioned players can fall into, and it’s far more difficult to parse whether a player is taking unfair advantage of that knowledge. In Play by Post, it poses an even greater threat because, simply, other player’s posts (including their inner thoughts) are out in the open in text. Your character might not have a way to know about the tawdry secret romance being lived out by other characters, or the ambush being planned by their rivals,  but the player certainly does. Because the information is so ample, temptation abounds, and it becomes harder to determine what a character might discover by being naturally inquisitive and what they are doing because they know what another poster’s motivations are.

Furthermore, all of this depends on the GMs ability to stay committed. They are people, and people will have moments when real life will come first, whether it’s dealing with family emergencies, keeping a roof over their head, or a busy season at work. If the GM needs to drop out for a little while, it can prove disastrous. They can either lock down the game, hoping that players are able to return once they are ready again (risking losing the players) or hoping that the players are able to self-moderate (which can lead to chaos). If a GM can’t ever get back…well, a game can be stopped in its tracks.

So, in spite of all of this, why do I bring up Play by Post? As much as it seemed to me at first that it seemed to be dwindling, as I kept looking around, I no longer know if that’s the case. There’s been constant activity at sites such as RPGnet and in the messageboards at the Order of the Stick forums. There still are GMs who understand the risks, and are well seasoned with over 15 years of experience with the format. Forums are still often free to maintain, so small groups of friendly like-minded gamers can keep small games going with a minimum of trouble. And recently, I was introduced to an acquaintance to a group who took an innovative approach: they schedule campaigns on a real life timeline, and offer players the chance to interact with different events, in different locations during specific time slots during the day. Every three days or so, the day flips and players deal with the consequences of their actions from the day before. This kept rewarding people for dropping in, but put limits on lurking endlessly. Your character simply can’t be in two places at once, which forces players to think more before starting a new thread. It takes a lot of work (and two GMs) to keep seeding and bringing along a campaign like this, but I have had a lot of fun in the meanwhile.

Aaron, fellow Cannibal Halfling, discovered RoleGate, a program which has adapted the system to mobile devices to allow easier posting and playing on the go. The format never died, but it has changed from what I first knew. That’s not a bad thing, and for something that I always considered a niche, maybe it was an essential thing. All I know is that it’s fun to play again.

Feel free to pester Aki with (and for) stories about Play by Post experiences at Twitter @WHalfling or in the comments below! For those who want to check out an example in play, I would recommend The Liberation of Bankor, a Fantasy Flight Games Star Wars PbP game I recently found.