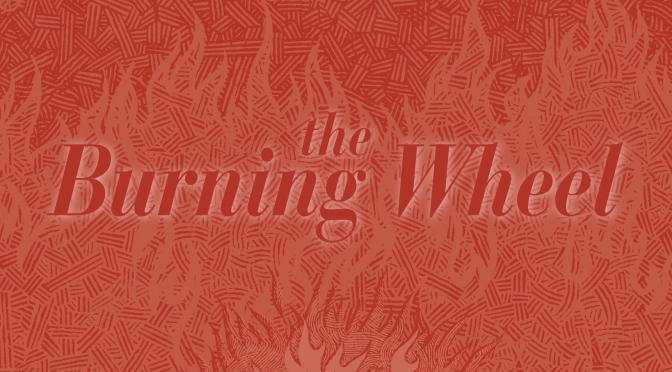 Welcome to System Split! Today, our very own Level One Wonk will examine two very similar systems to see what sets them apart. When the genre, complexity, and even rules system are exactly the same, what makes a game unique? Today we look at two fantasy RPGs from the twisted and brilliant mind of Luke Crane: Burning Wheel and Torchbearer! Despite one being based on the other, they offer very different experiences. How different? Read on!

Fantasy, sword and sorcery specifically, is a fundamental part of the foundation of role-playing games. And while Dungeons and Dragons has become the de facto native language of fantasy role-playing, there are many ways to model the genre without using the game conventions that Gygax and company created. By 2002, there had been over 25 years of evolution in fantasy role-playing; even D&D itself was on the third edition of its second iteration. If you were to write a completely new fantasy role-playing game at that time, though, it would likely look quite a bit different than Third Edition D&D. Luke Crane did just that, and the game he came up with is called Burning Wheel. Burning Wheel is a game driven by characters, where they come from, and their beliefs about where they’re going. The design plays very differently from D&D, a fact which was not lost on Crane and the Burning Wheel design team. In 2012, Crane and his fellow designer Thor Olavsrud took their affection for Basic D&D and spun it into Torchbearer, an old school dungeon-crawl game based on the Burning Wheel mechanics. While Burning Wheel and Torchbearer are not the only games based on these mechanics (in between the two the game Mouse Guard was released), they are the two in the family which aim for similar setting feel and tropes, even though the play experiences will be very different.

The basic mechanics of both games are the same, and consist of a skill resolution mechanic and a conflict resolution mechanic. The skill resolution mechanic is based on a dice pool: roll a number of d6s for every rank you have in a skill. 1,2, and 3 are failures, while 4,5 and 6 are successes. The difficulty is represented by the number of successes you must roll. The conflict resolution mechanic is one of simultaneous resolution: both sides of a conflict choose an action from about half a dozen choices. Once these are revealed, both sides are told what to roll on a small chart. As an example, if one side chooses attack and the other chooses defend, the defender would roll a skill to stop the attack. If both sides chose attack, though, then they would both roll to hit and not get a chance to defend. There are three sets of actions that use this basic system: hand-to-hand physical conflicts, physical conflicts at range, and social conflicts.

The games are made much more interesting through the advancement mechanics. In both games, you count every skill test made, and mark them off on a per-skill basis. Once you have enough tests rolled for a skill that meet the given criteria (difficulty level in Burning Wheel, success or failure in Torchbearer), you can advance the skill. If this sounds fiddly and specific, it’s likely because it is. However, using such a system means that characters only improve with skills they use, and only improve by pushing themselves…it’s impossible to advance without attempting difficult tasks. The second advancement mechanic is even more interesting. In both games, your characters have a set of Beliefs. Beliefs are narrative elements that should motivate characters, and they will evolve and change through the game as they are tested. In both games players earn Fate points for playing to their beliefs and working towards character goals. For accomplishing these goals, grappling with beliefs (by playing against them) and well-received role-playing, players can earn Persona points. In Burning Wheel, there are also Deeds points awarded after significant in-game plot events. In many games, RP rewards like this would be fairly minor, and the primary use of these points are similar: points can be spent for specific in-game effects, or to add dice or successes to rolls. However, the cumulative total of these points are critical for advancement: In both games there are abilities you can only gain through earning Fate, Persona, and/or Deeds points.

Burning Wheel is a game of long character arcs and epic journeys. You create your character by choosing a number of lifepaths which represent where your character was born and where they came from. These lifepaths determine the bulk of your starting skills and your stat pool, as well as NPCs you know and your starting wealth. Once you have a starting character you may gain improvements in ability through testing skills but to become truly heroic you must earn Fate, Persona and Deeds points by playing into your Beliefs and having a character who is truly fighting for what they believe in. Once you accumulate enough of these points (collectively called ‘artha’ in Burning Wheel), you can change the shade of an ability. The shade of an ability represents its odds of success on a die…while a standard skill (a black shaded skill) requires a roll of 4,5, or 6, a heroic skill (a grey shaded skill) requires a 3,4,5, or 6, and a superhuman skill succeeds on every roll but a 1. As you spend more time developing your character and understanding their beliefs, they begin to take on more significant power and have more capacity to fight for their beliefs.

Torchbearer is a game of adventurers searching for treasure in dark dungeons. Dungeon crawling is not a glamorous profession, though, and Torchbearer characters are as fragile as their Basic D&D equivalents. Instead of the more far-reaching and flexible lifepath system, Torchbearer uses a class-and-level system somewhat similar to D&D. While you do still write Beliefs, your character also has a Nature which helps to explain the type of person they are. And while skills are still advanced by accumulating skill tests, you can only advance to the next level in your class by gathering enough Fate and Persona points (collectively called “Rewards” in Torchbearer). The mechanics of Torchbearer are focused on the dungeon delve. All game time is divided into turns, not just combat. This use of turns allows you to track important resources, namely food, water, and light. The longer you go without rest, the more likely you are to accumulate ‘conditions’ like hungry, angry, or tired. Conditions generally replace something like a hit point track, which may seem weird but typically makes it easier to role-play a character who’s been out in the cold woods for a couple nights too many.

Another significant mechanical addition to Torchbearer is the encumbrance system. Instead of having a weight limit or other abstract encumbrance value, a Torchbearer character has specific slots. You can wear a pack on your back which can carry a certain number of objects. You can have a certain number of pouches on your belt. You can wear something on your head, and carry something in each hand. If you want to pick something up but both hands are full, you need to put something else down. Similar to the conditions rules, this is an element which seems incredibly specific, but ends up being much easier to use than a mathematical abstraction designed to do the same thing. It also helps tell you what’s important in the game, and what you should be paying attention to.

To me, both games are incredibly evocative, using very deliberate rules choices to create the thematic environment that is desired. In Burning Wheel that’s a character-driven heroic epic, while in Torchbearer it’s a gritty low-fantasy dungeon crawl. The main issue with the rules in both games (though more acutely in Burning Wheel) is that there are quite a lot of them. These are games that require engagement with the rules systems to really appreciate them…if you’ve ever used the phrase “I want the rules to get out of my way at the table”, then there’s a good chance you won’t like these games. That said, these games aren’t designed like GURPS where there are rules for every eventuality, rather there’s a rich set of mechanics for engaging with what the designers saw as most important. This is also why Burning Wheel and Torchbearer are so different. Even though the basic mechanics of both games are nearly the same, the rules superstructure around those mechanics are designed to reflect different priorities. So while both games are about characters fighting for what they believe in, Burning Wheel emphasizes the hero’s journey (lifepath for origin stories, more expanded heroic ability growth) while Torchbearer emphasizes the excitement and danger of the dungeon (resource management and encumbrance rules).

Burning Wheel shows that you can indeed have a “crunchy” narrative game. Like Powered by the Apocalypse, the rules are designed to maintain conflict and momentum: In both games the GM is supposed to use the information given to them by the players to press on their personal goals and beliefs and use that to create conflict. While PbtA pares the mechanics back to a set of genre-relevant moves, Burning Wheel games provide a much wider palette of mechanics to keep the game involved and exciting. These are not universal systems, though: the differences between Burning Wheel and Torchbearer serve as perfect examples of how the ruleset has been adjusted to provide different play experiences, much like the differences between games like The Sprawl and The Veil. Using a ruleset as complex as Burning Wheel does require a fair amount of work; GMs and players alike may balk at the notion of tracking every skill test individually, for instance. If you’re willing to put the work in, though, what you’ll get out the other end is your own fantasy epic, more personal and more varied than any jaunt from level one to level twenty.