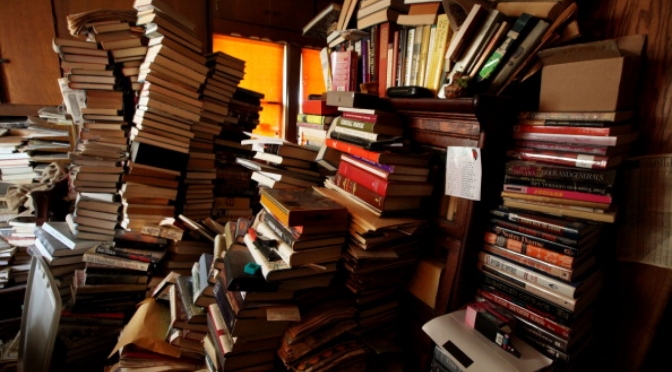 After over a dozen years of playing tabletop RPGs and nearly as many systems, I got excited about a new game.  I had played fantasy and sci-fi and supernatural and post-apocalyptic games, but here was one for my favorite genre, horror (the names and faces of the games have been withheld because this is not a review).  The problem I ran into was that I couldn’t find anybody who wanted to run the damn game. Then one day my boyfriend suggested to me that *I* run it. Oh boy. So now I was a Game Master (GM). What exactly had I gotten myself into?  Let me tell you a bit about some things I learned in my first forays into GMing. I promise you’ll make your own mistakes, but maybe you can at least avoid mine.

I was off to a good start, I had a book.  That was my first mistake. If you’re going to GM, buy two copies, especially if it’s a system you and your players haven’t used before.  You need to have a copy at all times but the PCs can share a book. This goes for other supplies, too. Get plenty of pencils, notebook paper, dice, and if you use them, a battle mat and whiteboard markers.  Your players will forget. If you want to make sure game runs smoothly, you need to have extra materials available. This is your game that you are running, so you have to be the one prepared out of game (OOG).  You never know what the needs of any group might be on any given night. One time we needed a bunch of candles because the power went out…for two hours…during a large D&D battle. Luckily, I was playing with LARPers and there were plenty of candles to go around.

Next, I needed players.  As it turns out, players are easy to find!  So much so, in fact, that you will probably have more than you can hope to run for.  I had five to begin with and we added a sixth after a couple sessions. That was too much for my first time and I got overwhelmed.  I would have done better to have four players, but my eyes were bigger than my stomach. I wanted all the cool people I know to play in my game!  Having that many people posed a problem that I should have anticipated but didn’t; Gamers tend to be loud. I’m smallish, somewhat quiet vocally, and female; I get talked over all the time.  Now, some of this is just how gamers do when they’re excited, but some of this has to do with gender socialization. Women are socialized to take a back seat to men during conversation, while men are expected to drive the conversation.  So in order for me to run a game for 5 guys and one gal, I had to put my theater training to work and use the Back of the House Voice to get and maintain attention in the face of excited gamers.

Also, I convinced a player with no experience to play in my very first game.  I should not have done that until I knew what I was doing. I’m fumbling around trying to figure out how to be a GM, I have a large party, and everyone else had years of gaming under their belt.  I did not have the time or attention that was necessary to guide him through and I think we turned him off of tabletop completely by making it inaccessible.

Here I am with a system, plenty of supplies, and players.  Now I need something for the players to do, the plot. I took a look at the setting and developed an instigating event.  Then I decided that the campaign would be them working backwards from the present to six years ago when the event happened, find out what the event was, and then they would move on to how to “fix” the problems the event caused.  I wrote six pages worth of descriptions and story. (Luckily the game came with an in-game (IG) setting complete with built-in starting hooks.) I knew exactly what I wanted to happen and the order I wanted things to happen in. WRONG!  That’s when I learned the axiom, “No plot survives contact with the PCs.” I had things opening up like a spiral. The PCs would start at point A and the investigation would lead them around to B, C, and D sections. I got as much as the hook out and the players of course went directly to section C and I had no idea how to get them back to point A.  Write a beginning and a few hooks that lead down some different paths they could take, and stop. You can have an idea for when/how the game ends, but leave it flexible. Your players will change the game world in ways you won’t expect and if you’re rigid about your story it will break when it needs to bend.

While we’re talking about writing, let me tell you about another mistake I made.  I had this idea that was really interesting and investigate-y and wrote riddles and puzzles…and I did it before I had characters in my hands.  I can make all the puzzles in the world, but they won’t matter to the party fighter, for example. I had written for *some* of my players. Don’t get me wrong, those players had a blast, but they were two of six people I was trying to entertain.  Those whose characters were not brainy had little to nothing to do. And this goes back to the idea that fewer players are better to start because you need to write something specific to each character each session. Some characters will have the spotlight one session, then someone else the next, but everyone needs a reason for their character to be there or they run the risk of boredom.  No one wants to play a game where their character does nothing for an entire session.

There’s more about writing.  It’s only fair, this is your main job as GM.  I started running a different game when that one fizzled out.  This time I had only four players. I learned more things. I spent about six sessions doing political stuff and puzzles and my players barely rolled any dice.  It was too weighted towards one type of adventure. Seek balance. Just as you don’t want a spotlight on the same couple people every session, you want the actual adventure structure to be variable.  Some people want battles, some people want intrigue, some people want puzzles. Do a bit of everything. If every session is a dungeon crawl, some players will get bored. If every session is a masquerade ball involving delicate dealings with important people, different people will get bored.  If you roll no dice at all for several sessions like I did, most people will get bored.

And then there’s the management aspect of running what you’ve written.  Remember how I mentioned being talked over? That is a real problem, and not just if you’re the GM.  Make sure every player has attention and influence, particularly the quiet ones. Keep people off their phones.  Handle conflicts with grace. I had a player (F) stop the session to tell another, newer player (S) that he wasn’t role playing right and he should do it this way.  I took a moment and listened to each of them. Now, player F was clearly out of line to tell player S how to play their character, but player F was also my landlord, so I did feel some pressure to be very nice about it.  But here’s the point: correct a player only when absolutely necessary, and pretend that every player is your landlord because they all deserve that kind of respect if they’re worth having at your table in the first place.  Everyone wants to be the hero (or villain, if that’s the kind of game you run) and may step on toes to get there. You have to manage the expectations of however many people show up. You have to be In Charge. Even if the players go off the rails and your story shreds in their hands, you know what the antagonists are thinking and doing.  And if you don’t, take a snack break while you think of something. You’re going to find yourself making shit up at some point, so be ready to improvise. For the most part, your players won’t know when you’ve transitioned from the game as written to something that just came to you.

There are just a couple more things I want to mention.  Books are great, but YOU are the final arbiter of what goes down in your game.  Be consistent. If you softball a rule for one player, be prepared to extend that courtesy to any other player in that situation.  The book is ultimately a tool for you to use to entertain you and your players. If for no other reason, take notes on the session.  But there are other reasons. My gaming group players are deeply entrenched in the workforce; sometimes scheduling is difficult. If there’s a long time between last session and next session, you are going to forget some shit.  Note what happened, who it happened to, and why. I thought it would be a relief to ask one of my players to keep notes for me because I like to work smarter, not harder. But that didn’t turn out as well as I had hoped, as the player wrote what their character did and not so much what the other players did.  So no cheating! Finally, experience points are free and they exist OOG. You can give your players points for doing things that make the game better IG or OOG. Jeff brought a couple pizzas? Points! Susan had a really awesome role play moment? Points! Chris made everyone custom minis for the battle board?  Points!

The first couple games I ran I made a lot of mistakes, even with the Level One Wonk there to talk me through it.  It’s more work than I thought, but more rewarding than I expected. Give it a try sometime. You might find you like being the deity at the table.

2 thoughts on “The Noob GM”