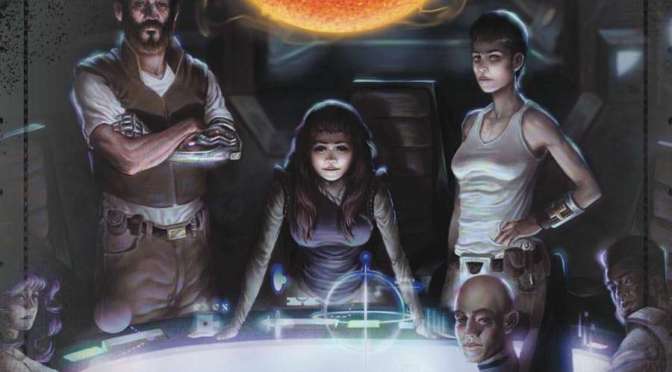 A technology-obsessed pilot, hacker, and engineer. A social butterfly who just so happens to be the ship’s medic. The crew’s fatalistic scout and security officer. An anarchist spy using a mechanic’s toolkit as a cover. None of them truly know what horrors await them out in the solar system . . . but they’re going to find out, because they’re a ready-to-play crew of characters for Shadows Over Sol from Tab Creations!

Of course, before we can get to the characters, we need to decide what sort of sci-fi horror this particular Shadows Over Sol crew would be playing in. Survival horror, investigative horror, and action horror are all very different flavors of the genre with very different expectations, and in Shadows Over Sol they also have a mechanical impact. For this crew I’ve picked . . .

Let me quote something from the book:

“In investigative horror, the characters are prepared enough that they may investigate or pursue the horrific elements in their actions, but they are not prepared or equipped for a direct confrontation. The relationship of the player characters to the horrific is one of pursuit and discovery punctuated by scenes of retreat and survival.” – Pg. 164, SOS Core Rulebook

Mechanically speaking this determines the party’s starting wealth and how many purchases they can get at character creation. You’ll see below that they’re decently equipped for their jobs; they have sufficient tools for their specialties, and they’re even all armed! They’re not exactly what you’d call over-armored or over-gunned, however, and they’ll be counting their few bullets very carefully. If they get into a fight they’re going to want to get out of it fast, and their skills are mostly geared towards figuring things out instead of killing them.

Our crew could get into all sort of horrifying investigations, even the Ghost Ship adventure in the back of the book, but while building them I’ve envisioned a mission as a deniable asset being sent to investigate what exactly happened to the Jovian colonies that have gone silent ever since the Jupiter Group Incident back in 2209 . . .

Jessica Harrington is the smartest person on the crew, no surprise coming from someone with the Genius Deluxe Geneline and the Techno subculture. She’s indulged in the somewhat stereotypical Techno inclination towards computer expertise – whether it’s common use or something a little less than legal, she can make systems sing. She’s also the crew’s pilot and gunner, though, making her truly invaluable; that she’s also the least hardy just makes that more critical.

Gunpreet Seth has been gifted with the genes of a Modern Superman, making his natural abilities overall the best of the crew. Still, he is better at some things than others – much better. He’s the crew’s skilled medic and overall bio and chemical (that would be the Heed in him) expert. His bedside manner is superb, which has added dividends when it comes to putting a face on the crew for others to interact with.

Kareena Ubayd is the big girl on the ship, fitting for the security officer; her parents probably didn’t expect their investment for an Athlete Deluxe would get used that way. She’s far and away tougher, stronger, and faster than anyone else on the ship, and she’s also both the best armed and the most skilled in a fight. That being said she’s difficult to put in a box; she’s also the sneakiest one aboard, and she’s got a varied skillset that works well with getting where she shouldn’t.

Yang Li Jun‘s public role among the crew is as a mechanic, a job he can perform quite admirably. His actual expertise, however, is in knowing things he shouldn’t and getting in to places he doesn’t belong. Whether he’s bypassing technological security or lying his way in, whether he has existing knowledge of the solar system’s secrets or he’s finding them on the job, he’s the best at peering into the shadows. Hopefully he’ll survive what he sees.

The most important thing you might be questioning about these characters is why some stats and skills look like X(+Y). Simple: leftover Experiences. Every character gets a 7/6/5/4/4/3/3/2 array to assign for stats and a 3/3/3/2/2/2/1/1/1 array to distribute across their skills; their Geneline and Subculture don’t give straight increases, but rather assign Experiences to stats and skills respectively. Many times you’ll spend some of those Experiences only to find that you don’t have enough for the next increase. Those remaining Experiences stick around, giving you a headstart on the next upgrade. For skills, their leftover Experiences also relate to past endeavors; whenever a skill is used and such an Experience is relevant, the action gets a +1 bonus. The book itself notes that theoretically you could eventually gain enough different Experiences for a skill to effectively get a +1 bonus all the time.

Who They Are and How They Interact

Much can be inferred about the characters by their Geneline and, particularly, their Subculture; as Thorin said when I asked him about the game, the subcultures come with a certain amount of cultural baggage that informs players of what they value and how they act.

As a Techno with the Genius Deluxe Geneline, Jessica Harrington probably comes from a long line of Technos, and her personal expression of her subculture’s values comes through in a love of ships and flying. Gunpreet Seth‘s identification as a Heed plays right into the fact that he’s knowledgeable about the human body, chemistry, and bio-sciences. A man all about experiences is going to want to know how to cook up new ones and then survive them; being a Modern Superman helps with both. Someone with the Athlete Deluxe Geneline is meant to excel in sports and other flashy pursuits, so Kareena Ubayd being a fatalistic Ghostman security officer implies a certain degree of rejecting what she was ‘meant’ to be doing, perhaps even a strained relationship with the parents who chose her Geneline. It doesn’t get more average in 2214 than the Spacer’s Standard Geneline, but Yang Li Jun is going to be all about being an Entro; more than something of an anarchist, Li Jun is going to be driven to uncover corporate secrets and fight back against the status quo.

Their Lifestyles also provide some vital cues. Jessica and Kareena live within their means, Gunpreet spends money as fast as it comes in, and Li Jun lives far below the standards he could be enjoying, perhaps saving up or trying to maintain a low profile.

As for how they function as a team, the fact that they’re envisioned as a team is important. They all crew the same ship, and their Experiences grant the vibe of having completed (or at least survived) several jobs together before play begins. They’re going to be relatively tightly knit, especially because they’re used to working on their own; Gunpreet in particular is going to be a linchpin, not just because of his Charisma but because he’s able to talk to most of his teammates in their native languages. The potential curveball is Li Jun; does the rest of the team know about his conspiracy hunting and integrate that into their team dynamic, or has he kept his Entro activities a secret from the crew, only for them to land everyone in trouble at a critical moment?

What secrets await Jessica, Gunpreet, Kareena, and Li Jun among the moons of Jupiter? What other horrors, lurking in the shadows of the Sol System, might await them on their next job? As always, that’s for you (and your dice) to determine! Either way, making characters for Shadows Over Sol has proved a fun and interesting experience; it’s definitely improved my already good opinion of the game.

Like what Cannibal Halfling Gaming is doing and want to help us bring games and gamers together? First, you can tell your friends about us! You could travel through one of our fine and elegantly crafted links to DriveThruRPG which, thanks to our Affiliate partnership with them, gets us funds to get more games to review)! Finally, you can support us directly on Patreon, which lets us cover costs, pay our contributors, and save up for projects. Thanks for reading!