There she stands on high mountain, overlooking her domain: My Queen, my Love, the woman who will kill me. I know she has planned my end, yet still I love her with every ragged shred of my darkened heart. No matter how hard she tries, she will not find peace while I yet live. My death will sever the line of inheritance of the Duchess, and quell her rival’s ambition. Perhaps when I lay still this war will end, and she may remove her cloak and veil and rest easy on the throne she has always deserved. Yet for now there is one more path to walk…

Welcome to For the Queen, a storytelling game of political machinations, dark history, and undying love. Put on your travelling boots, sharpen your sword, and keep an eye out for skulking figures in the night as you follow your liege on a fateful journey to broker peace.

For the Queen is a collaborative storytelling game by Alex Roberts, host of the Backstory podcast and author of the Diana Jones Award winning game Star-Crossed. In it, you will join your enigmatic Queen on a doomed journey to a distant kingdom, revealing your history and allegiance the entire way. The game is intended for 2-6 players, and can be modified to run anywhere between 30 minutes and a couple hours. It has received a lot of praise, and I think it deserves its place in the storytelling game hall-of-fame. If you are already convinced you can buy the game here, if not read on.

Disclosure: I received a free digital copy of For the Queen from Evil Hat Productions to help me review the game. All thoughts herein are my own, and I loved the game so much that I bought myself the physical copy to play at home! Thanks to Sean Nittner for setting me up with the digital game for review. 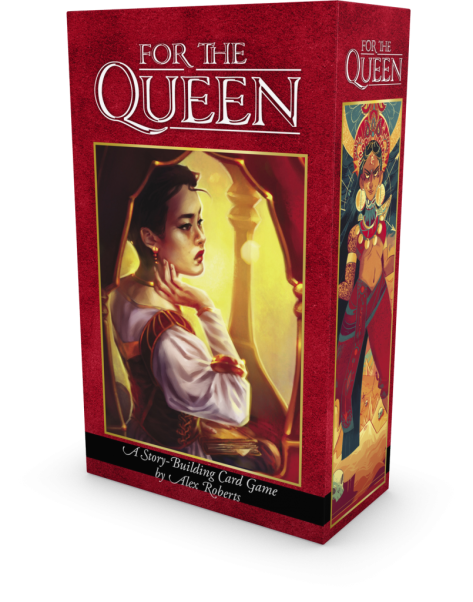 For the Queen is a beautiful game, from the decorated crimson packaging all the way down to the illustrated Queen cards that are central to its tone. The game is entirely card driven—all you need to play is the deck of custom tarot-sized cards, which are available as either a physical set or in a slick Roll20 app for online play. The game puts players into the role of followers of the Queen, a regal monarch on a quest to a warring kingdom seeking to negotiate peace. At the start of the game you won’t actually know who your character is, just that the Queen chose you specifically to be her companion on the trip. Over time you will answer questions from the cards you draw, slowly exposing the characters you play and their relationship to the Queen. There is no defined setting in For the Queen, and it will be up to you to outline what your game will actually be about. This lack of setting makes the game great as a cut-away session in a larger campaign—I would highly recommend inserting For the Queen into your own story somewhere where you want to give a face to political intrigue.

The game doesn’t surrender all of its influence though—no matter your setting the questions that arise over the course of play will force you to contend with your Queen’s violence, the weight of her history, and the debts you owe to her. Your characters will constantly be pulled between their allegiance to the Queen, and their own political plots and relationships. In one game I played the young son of a baron in the kingdom, taken to the Queen’s court as a hostage to ensure the obedience of my father. In another game I was the Queen’s loyal knight, indebted to her highness for sparing me from some unspecified social disgrace in the past. Both games highlighted my debt to the Queen, though neither game made her a clear hero or villain. The question cards of For the Queen ensure that no matter your allegiance, your monarch stands as the central column of a story just waiting to collapse about her head.

A surprisingly large part of the game’s flavor comes from a single card chosen at the start of the game: the queen card. Your group will choose one of the 14 illustrated cards in the queen deck to sit in the center of the table and represent your monarch. This may seem like a small choice, but I’ve found that it makes a huge difference where your story goes. A game centered around the dark, brooding, shadowy Queen will likely be full of more violence and intrigue than a game focused on the whimsically adorned Queen who seems to be friends with forest creatures. All of the queen cards feature beautiful art in a variety of styles, a collection of work by accomplished RPG artists such as Shel Khan, Stephanie Böhm, and Joyce Maureira. This is where a lot of the game’s replayability comes from, and it gives the opportunity for a bunch of unique experiences from a single game.

For the Queen’s Roll20 integration deserves special recognition for making the game accessible to players who can’t be in the same physical place. The integration does away with a lot of the fiddly bits of the site, and instead focuses on a simple board and the three decks of custom cards. There is an illustrated digital playmat to put your cards on as you draw them so the whole table can see. This digital version of the game has all of the same features as the physical version, and is a great solution if remote play is important to your group.

The GM-less gameplay of For the Queen is simple and improv-heavy, centered on questions drawn from the prompt deck and asked by players at the table. The deck is reminiscent of the freeform prompt cards of The Quiet Year, simplified to focus on the themes of the game. While you start your journey with a vague and amorphous character, you quickly build an intricate web of feelings, relationships, and shared history that cements your role in a larger story. By the end of the game you will know exactly what your relationship is with the Queen, and will have to decide if your love is strong enough to protect her from harm. There is no traditional conflict-resolution mechanics—what you say goes—excepting the in-built X Card mechanic which can be used to avoid questions you would rather not answer.

For the Queen is broken down into turns, with each player drawing a card and answering the question on it during their turn. The cards have questions such as “The Queen trusts you, but no one else in the royal court does. Why?”, “What brings out the Queen’s cruelty?”, and “Who is this distant power you are traveling to, and why do they make you uneasy?” The cards roughly break down into three categories: Cards that ask you about your character, cards that ask you about the Queen, and cards that ask you about the journey (with some overlap between categories). Despite starting out with a poorly defined character, the heavy emotional weight of the cards will quickly drive you to codify your character’s role in the Kingdom, as well as their relationship with the Queen. This may seem like a narrative exercise disconnected from the other players, but the game provides opportunity to ask expanding questions and to pass cards around the table, bringing every player into each answer. In one of my games we spent most of the session eagerly foisting cards on other characters to draw out specific parts of their story.

For the Queen is the first game I have seen that gives the players explicit permission to use the X Card as a narrative tool as well as a safety tool. If you haven’t heard of the X Card, it is an often used RPG safety tool designed by John Stavropoulos. It gives players and GMs the option of avoiding content that they don’t want at the table, and is generally used to make sure no one is uncomfortable when playing a game. For the Queen takes the ethos of the X Card a step further, and leverages it to allow players to make directorial choices as well. Does a question seem uncharacteristic for the type of story you are telling? Feel free to cut it. This implementation of the X Card gives players more responsibility for the story, and allows meaningful narrative choices to be made in a creative way. I really appreciate this more expansive take on such a core RPG tool.

The game ends when you draw a specific card that simply asks, “The Queen is under attack. Do you defend her?” Each player answers this question as the crescendo of intrigue comes to a head, incorporating their character’s history as well as their feelings to decide the quest’s fate. In both games that I played my feelings for the Queen oscillated as the game went on. In one, I had to decide between protecting the Queen who had given me a position of power, or betraying her to claim my own kingdom in the turmoil. Every few cards my thoughts would change, but when it came down to the final card, I stood with her in battle against the assassins that I had hired to see her snuffed out. The emergent narrative explicit in the game is sure to result in tense, emotional conclusions that make every previous answer important.

For the Queen has received a ton of critical acclaim since its release, and I am inclined to support the hype. Roberts has distilled the storytelling aspects of roleplaying down to a concentrated experience that is almost certain to leave you satisfied. The game relies on progressive character revelation to make sure you are constantly learning new things about the retinue; always tense about the shifting allegiances. The system feels like a dramatic TV series—every turn results in a shocking revelation, tender moment, or the expansion of a character’s emotional boundaries. Despite its simplicity, it is a wonder to behold the kinds of stories that emerge when playing For the Queen.

I would highly recommend For the Queen for anyone interested in developing their storytelling skills, even if you don’t have a lot of experience with improv. The game incentivizes intrigue, and encourages players to get creative with their character’s feelings. It doesn’t really cater to the traditional character-conversation model of player interaction, but if you have a few friends who are also interested in telling a compelling story, you can’t go wrong.

You can purchase a physical copy of For the Queen right now for $19.99 on the Evil Hat Productions storefront, and you can find the digital version for $7.99 on the Roll20 Marketplace. You can find Alex Roberts on Twitter at @muscularpikachu, and links to her other work, including Star Crossed and the Backstory podcast, can be found at her website. I thoroughly hope you enjoy your time spent following your Queen.

Only one question remains: Will you defend her?

Like what Cannibal Halfling Gaming is doing and want to help us bring games and gamers together? First, you can follow me @Blooperly_ on Twitter for more RPG commentary and news! You can also find our Discord channel and drop in to chat with our authors and get updates! Finally, you can support us directly on Patreon, which lets us cover costs, pay our contributors, and save up for projects. Thanks for reading!

2 thoughts on “The Independents: For the Queen”