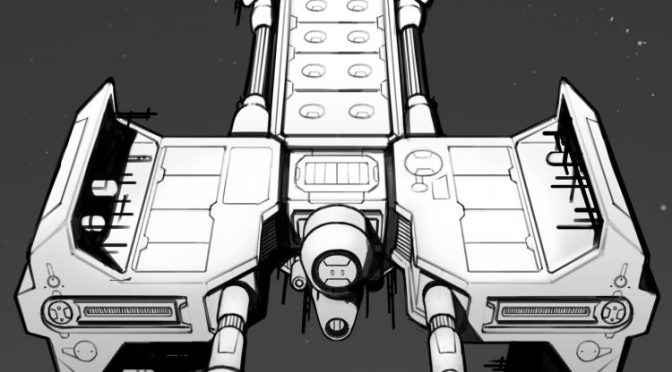 A small but fierce combatant, able to slip past enemy defenses and outside of their counterattacks with equal ease. A leader of beings both digital and organic, with ships and fast attack craft and crew all following her lead. A staunch defender, who can patch up whatever wounds make it past his efforts. Consult your star charts and prepare to go beyond the galactic frontier to complete your objectives, with a ready-to-play fleet of Artificial Intelligences and starships for Transit: The Spaceship RPG!

With the AI Operations and Mission Control Manual for Transit having reached Electrum Best Seller status on DriveThruRPG earlier this year, and the release of QuickStart mission Dahvil Delivery just last month, it’s as good a time as any for another fleet of ships to be heading out beyond the galactic frontier. You can also thank @SoCalGamer on Twitter, however, who asked if there would be a Transit Meet the Party and had me staring into the middle distance wondering why I’d never thought of that before myself.

For those who’ve missed the transmission, Transit: The Spaceship RPG is a Powered by the Apocalypse game written by Brian Casey, Bradford Wylie, and myself that sees players taking on the roles of Artificial Intelligences with starships for bodies. The only beings capable of making the calculations to Transit across interstellar distances, these AI travel beyond the galactic frontier, guided by Mission Control (the GM) while trying to deal with stellar phenomena, rogue AI, alien creatures, and their own crews in the course of completing their objectives.

The thing that’s most different mechanically about Transit from other PbtA games, however, is how characters are built and determine what stats to use. Rather than a series of playbooks that are each standalone and, all things considered, pretty set in stone, Transit characters are much more modular. Each AI has a type (Combat, Command, and Support in the core book) that conveys ‘mental’ stats like Analysis and Rampancy along with Moves unique to the type, but each AI is also then installed in a ship which contributes ‘physical’ stats like systems and handling along with various equipment. Each AI type could be installed in any one of the classes of ship (six of which are in the core book), and simply pairing them together creates unique abilities. Moves, then, usually involve combining an AI stat and a ship stat to add to your 2d6 dice roll.

So, without any further ado, lets see what kind of fleet just jumped in-system: a Combat Destroyer, Command Carrier, and Support Cruiser!

Role Modification: If targeting a ship larger than you (determined by load rating or MC), you inflict +1harm against it.

For-02 chose the name for their ship well: they’re a gut-punch-fighter who can deliver nasty hits, avoid the worst the enemy can send back, and get themselves and their allies to safety. Using their Stealth System allows them to act without external interference and make devastating surprise attacks that bypass enemy defenses. While not the toughest ship in the universe, their Ace Pilot puts the Katar‘s maneuverability to good use in keeping it intact, and knowing how to make a Tactical Retreat means For-02 can always leave the fight behind if it turns on them.

As a Combat AI, For-02 also has access to Tactical Analysis, which enables them to work with Mission Control to find weaknesses, exploit opportunities, and create a combat plan.

Role Modification: When making the Command Override  order for your Fast Attack Craft, roll 3d6 and discard the lowest die.

Libra Saint has mastered the art of social interaction – and if that doesn’t work for some reason, she can send in the fast attack craft. She has two Squadrons of them, one configured for heavy assault and the other for stealthy scouting. The Frontier Fastness has been modified to minimize most of a carrier’s weaknesses, first decently armed and protected and second covering for its poor handling with Improved Thrusters and an Improved Navigation Computer. Having User Interface +2 makes her excel at moves like Manipulate the Situation, and takes full advantage of her Crew and FAC; Taskmaster, in particular, means she’ll be able to Deploy Crew much more efficiently.

As a Command AI, Libra Saint can also come up with Diplomatic Solutions by working with Mission Control to see, without needing to roll dice, what she needs to provide, do, or offer in order to get NPCs to do something for her.

Modifications: Point Defense Weaponry (When using Hold the Line, you may pick one extra option, even on a miss), Electronic Countermeasures (Provides the ECM Move)

Azure-Aid keeps the fleet and its biologic Crews safe from harm as long as he can, and then helps them recover from whatever harm they come to despite his best efforts. He can guide the fleet through danger whenever they have to Take Desperate Measures. The Last Ditch‘s Point Defense Weaponry helps Azure-Aid Hold the Line to shield other ships from attacks, and its Electronic Countermeasures can help further blunt incoming fire.  If all of that fails, though, he can still use make Field Repairs to patch up ships and open up the Medical Bay to patch up crew.

As a Support AI, Azure-Aid has access to a Workshop; in addition to the extra benefits provided by his Moves, this means that Azure-Aid is going to be able to create specialized tools, equipment, and workaround solutions while deployed.

For-02 is a good bit cagier than some of their fellow Combat AI, which is probably what landed them in a destroyer in a first place. During pre-installation trials they were often observed engaging the somewhat-frowned-upon Blechner Protocols to think up solutions outside the limits of standard programming, and were also noted to display an above-average level of caution up until the point when they got a solid targeting lock in simulated combat. They thus quickly gained a reputation among Mission Control and their organic controllers for being an AI that could probably be trusted to remain operational, so long as they didn’t get tunnel-vision trying to put a superlaser shot up the exhaust port of a battleship.

Libra Saint was classified as a Command AI mere hours after initialization, displaying a seemingly insatiable need for social interaction and a willingness to tell both organic crew and fellow AI what was best for them. With a note in her file about the consequences should she be isolated (a not-uncommon entry for many socially-inclined AI), it was decided that she would be given a carrier to increase the sheer number and variety of beings for her to interact with. She’s taken to it quite well, increasing crew efficiency by a significant margin in the process. but regards interacting with her own crew as the equivalent to a diet of bread and water. The truly satisfying offerings should be found somewhere beyond the frontier, with entirely new and different beings.

Azure-Aid took the options in training simulations that would result in complete, or at least close to complete, functionality within the fleet. When put to the test on the issue of failing mission objectives through a refusal to sacrifice ships or crew, he posited that in the overwhelming majority of situations an intact fleet would be able to have another go at it. His organic masters made a note about never deploying him without a more aggressive AI to push the envelope, and gave him a support cruiser. In truth, Azure-Aid’s drive for a ‘nobody dies’ scenario in every mission actually has a lot to do with a self-imposed challenge; exploring beyond the frontier is so dangerous, for so many diverse reasons, that any AI could complete their mission objectives by getting shot full of holes and losing half their crew. A truly gifted AI, however, will come back with barely a scratch on their ship’s paint (even if a lot of scratches had to be buffed out and painted over on the return trip).

Like many other Powered by the Apocalypse games, Transit uses questions during character creation to establish relationships between player characters that can have a mechanic impact. Where Apocalypse World uses Hx and Masks uses Influence, Transit uses Compatibility.

Which of you has come to my aid in a time of need? Azure-Aid. Mark COM +1.

Which of you seems the weakest or most vulnerable? Libra Saint. Mark COM -2

Which of you is most reliable and dependable? Azure-Aid. Mark COM +2.

Which of you is difficult, but useful to communicate with? For-02. Mark COM +2.

Which of you is steady and trustworthy? Libra Saint. Mark COM -1.

Aside from the mechanical implications related to Compatibility Moves, the answers to these questions tell us something about how these AI view one another.

For-02 views Azure-Aid as a steady companion, but they also regard Libra Saint as someone who needs protection and can’t be left on her own, a dependent that needs to be shepherded.

Libra Saint also views Azure-Aid as reliable and dependable, but while For-02 is at best a poor conversationalist her interactions with them have always been useful.

Azure-Aid is closer to For-02 because, as far as he’s concerned, the Combat AI needs his help a lot more. He considers Libra Saint, on the other hand, to be much more capable of taking care of herself, and so she can be left at more of a distance.

What sort of missions will For-02, Libra Saint, and Azure-Aid find themselves being deployed on? Well, that’s up to their nominal organic masters . . . which is why building an HQ is so important.

Requisition: 3 per mission. +1 for Research, Development, and Exploration missions.

In addition to the Standard Ops (which have the unusual addition of Lucrative Raiding as well), when things are going according to plan Outpost FFG-636 is going to be able to direct its fleet to take on Research, Development, and Conquest missions. It’s also going to be able to provide additional Requisition (used to recruit Crew, make repairs, and acquire new items) to each ship for Research, Development, and Exploration missions. However, its aspirations and abilities don’t come without risk.

It gained the Conquest Aspiration in place of the Exploration Aspiration because of its aggressive population. The population is vulnerable to hunger given its isolation and location on an asteroid or moon, and as its population consists of exiles and/or refugees it’s also vulnerable to insecurity. Being a military base means that Outpost FFG-636 has obligations to protect other locations, and its lucrative raids invite reprisals in turn.

So, will our Artificial Intelligences complete their mission objectives and stick to their parameters? How will their relationships with their HQ, their Crews, and one another develop? What will they learn about themselves? What will the find out there beyond the frontier? As always, that’s up to you (and your dice) to determine!

Transit: The Spaceship RPG is available at DriveThruRPG in PDF and Print-on-Demand (softcover and hardcover) forms. Dahvil Delivery, a QuickStart mission that can be played with the core book or on its own with the use of free downloads, is available there as well in PDF form.

Header image is by JJ Ariosa from the AI Operations and Mission Control Manual.