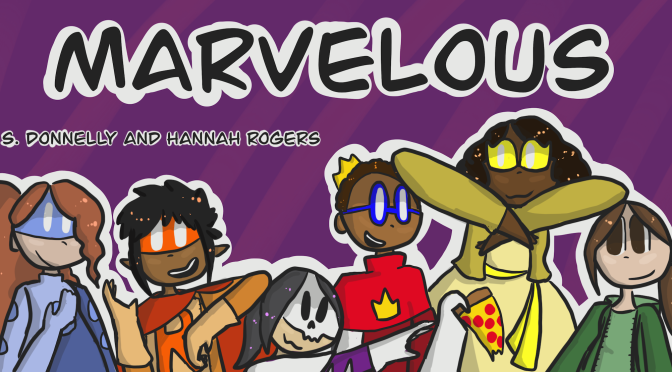 Now, we all love a superhero fight. Seeing two monumental figures with fluttering capes dealing blow for blow in titanic might. Blasts of magic and ethereal energy shockwave from the fingertips of villainous casters. The climactic fights between good and evil. But a superhero story cannot survive on acts of superhuman power alone. They cannot go year after year for this decades-spanning industry if it was just Superman beating up Metallo every week. No, what keeps us coming back is Superman’s humanity. The moments where he talks with those of non-high flying identity. How his relationship with Lois Lane develops. We read the comics for the ‘man’ in Superman.

A friend once told me that my greatest strength as a writer was finding the mundane in the fantastical. Well, it is less a strength and more where my passion lies. I adore the scenes in comics of costume-glad crusaders sitting down for some pizza. I don’t care as much for the end to Dr. Destruction’s world-ending threat, as much as how the hero putting themself in such a stressful situation will lead to them developing as a person. It’s about the people who put on the mask for me. Not the mask itself. Today, I have brought a game on to discuss that exemplifies such a thing. A game that makes itself known as character first, superheroes second.

With that said, let’s dive into Marvelous.

Marvelous by S. Donnely & Hannah Rogers describes itself within the first section as not being about taking down villains. Instead, it puts forth the ideal of aiming for teen melodrama and angst, with superheroes simply being the platform for such a story to be told upon. It also is bluntly honest that this game will fail at being a superhero beat ‘em up game.

I respect that last part quite a bit. Many games attempt to be an “everything-RPG” which inherently usually ends up weakening their core focus. Lean into what you want your game to be and it will be stronger for it.

Marvelous uses the Belonging Outside Belonging system, also known as the No Dice, No Masters system. This system is based around tokens and, as the second title would suggest, being both GM-less and dice-less. Frankly, I believe it was only a matter of time until a superheroic game for the system was made. I even contemplated writing one. I’m glad I didn’t, as Marvelous helps exemplify the best aspects of such a combination.

Utilizing a superbly charming artist style that pervades throughout, Marvelous brings a set of playbooks for your character to choose and use for further customization. Noteworthy about these playbooks is that, like many BoB games such as Dream Askew, they have evocative and concept-drawing titles for their genders beyond real life known terms. Once again, it serves the book well. Gender, through my four-five years of being an out trans woman, rarely means the same thing for everyone. There are commonalities and unifiers. But finding someone who has the 100% same experience as another brings forth the image of a needle and a haystack.

On a side note, I found The Rookie’s “not so much out of the closet as set the closet on fire” gender option particularly relatable and intriguing for itss story avenues.

And now that we’ve mentioned the Rookie, I believe it’s time to bring out the playbooks in their entirety:

The Idol is part superhero, part social media icon. They are based around what you gain and what you give up in the search for and having of fame. It’s a push and pull, and you will have to figure out which is greater for you when playing this playbook.

The Anchor is your everyday best friend. They’re not superheroic or superhuman but have something else that is just as important: Groundedness. Whether as an in- distress friend who reminds the heroes of what they’re fighting for or the person who can cut through the bullshit, they’re as necessary as any power for superheroics.

The Tempest is power incarnate. But as we all remember from being a teen, being a gifted child comes with its own baggage. And when you can wreck cities as easy as blinking, that just adds more of it. You need to figure out how to control these unreal abilities. Before they cause harm even you can’t change.

The Villain is a villain. Not as simple as that, however. It’s about not fitting into society’s idea of good. It’s about having a code potentially stronger than any “hero”. It’s about finding out what good and evil mean to you, not the mainstream idea.

The Heir is a hero who grew up to inherit the mantle of heroism passed down to them. They need to figure out whether the hero they are being chosen to be is truly the hero they want to be. Heavy is the head that wears the crown.

The Rookie is a hero who hasn’t been a hero for very long. They’re new, wide-eyed, and idealistic. But they are also someone who left behind their old self and became a brand new person. Which will lead me to my ending point.

The game tells you in the opening paragraphs that gender and queerness are a pivotal part of this game. Each of these playbooks could easily slot into a transgender narrative from the first reading of their traits alone.

The Anchor being the person satisfied and experienced with their gender identity. The Tempest being someone who feels out of control and in denial of their identity. The Villain being a trans person who doesn’t “fit” into the accepted ideal of trans people. The Heir being someone who worries about disappointing expectations with their trans identity. The Rookie being the newly out transgender person. And the Idol, well, being a trans person with cameras on them at all times.

When you look at the Setting Elements of the game, you begin to notice a common trait with each of them:

Authority. The idea that you need to be told what’s right.

Fellow Teens. Judgement and pressure from your fellows.

The Extraordinary. Things you just can’t quite understand. Yet.

The City Itself. What surrounds you and how it affects your own self.

The Weight of History. What came before and why you “should” respect it.

Each of these is about being told what you are. How you should be. How you should act. What you’re doing wrong. It’s about the world putting pressure on you, for good or ill, and you finding a way to be yourself in spite of that.

I said in a previous article that Powered By The Apocalypses games are rife for queer narratives. In particular, Masks: A New Generation. That is due to superhero media having an intrinsically queer narrative built into it. The hiding of oneself for safety. The feeling of being an outsider. The community etc. It’s something that when you lean into for superhero media, can lead to some of the best stories.

But whereas Masks leaves it as subtext, Marvelous instead makes it text. If you follow me on Twitter or read my articles here, you know I love two things. 1. Masks. And 2. Trans narratives. With Marvelous, I have found something I had not thought possible:

A superhero game better at emulating trans narratives than Masks. By making it as pivotal as any other aspect of the genre, Marvelous has shown that it can tell stories from the get-go about the intersection of transgender/queer narratives and superheroes.

And I can’t wait till everyone discovers this game and to see the stories that come from it.