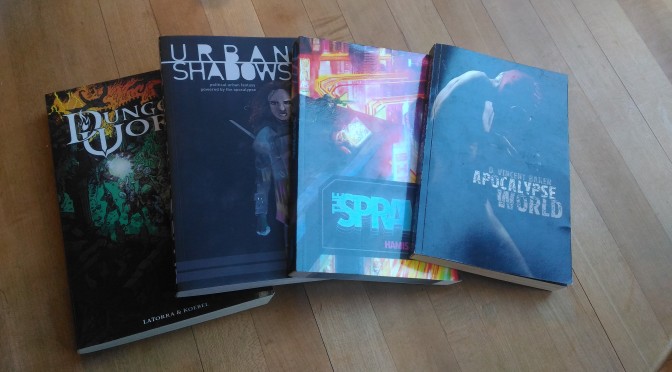 Are you a Butt-Kicker, a Specialist, or a Story-Teller? There is a huge world of games out there to satisfy every player’s and group’s style. And while there are academic discussions in every corner of the internet, sometimes it’s best to start at level one. Join the Level One Wonk in exploring the possibilities that RPGs have to offer, from Aberrant to Zorcerer of Zo. This week’s offering: the Powered by the Apocalypse System!

When you talk about games that emphasize story, you’re talking about games which are constructed differently, rules-wise, than games that emphasize mechanics, realism, or anything else. This results in a whole range of different possible rules. On one hand, you have games which dispense with typical RPG notions entirely, like Microscope. On the other, you have games which are still structured like traditional RPGs, with key differences. That latter sentence describes Powered by the Apocalypse (PbtA) games. PbtA started in 2010 with Apocalypse World and has since become immensely popular both because it’s accessible to both new and veteran gamers and because it does what it sets out to do, create dramatic stories, very well. 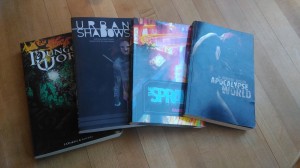 When you look past the vocabulary differences, the basic setup of a PbtA game should be familiar to anyone who has played D&D. Each player character has a class (in PbtA parlance, a playbook), which is defined by a set of unique abilities (Moves). They have statistics which generalize their character, and these impact the game by modifying dice rolls. When characters do things to advance the story, they earn experience points, which eventually allow them to go up a level (Advance). There are a finite number of levels/advances in a character arc.

The similarities between PbtA and D&D are strong and translatable; one of the first popular games which spun off from the original, Dungeon World, took advantage of these similarities to cast D&D itself into the PbtA mold. Dungeon World is a very different game from D&D, though, because there are some very important differences in how the two rulesets work as well:

So the game is written differently, for certain. How does it play, though? In my experience, the rules of PbtA games are designed with two elements in mind. First, the rules are light. In PbtA games, there is one die roll, 2d6, it is modified once, by a stat, and there are three results, which always use the same numerical thresholds. Second, the rules are specific. Every action mediated by a die roll is covered under a move, and each move has specific rules for what happens with each of the three die results. Because the rules are light and specific, play moves fast and the drama level stays consistent. The GM doesn’t spend time adjudicating, they spend time describing. The rules themselves are designed to give the GM as little to do as possible, because the GM is supposed to be spending as close to all of their mental effort as possible telling the story as it’s happening.

What’s happening on the GM’s side is more central to how PbtA games really end up differing from other RPGs. Each PbtA game gets its setting from the specifics of how the moving parts of the rules are implemented, but it gets its pedigree as a storytelling game from how the role of the GM is altered. As mentioned above, the GM has complete authority over the events that occur when the GM makes a move. This may sound like a dramatic increase in GM power at the table, but the reality is kind of the opposite. In order to play a PbtA game the way the creators intended, the GM has to give up their sole control over worldbuilding and storytelling, and share it with the players. When the GM runs a game, they are supposed to take input from the players and construct a shared world from the bottom up. And then, they’re supposed to use a set of rules on threats in the world to tell them what’s happening, rather than write a story in advance. The rules on GM moves, threats, and clocks give the GM all they need to generate a story organically, but there’s nothing to stop them from writing something up behind the players’ backs. That’s where the Agendas and Principles come in.

One reason some people really don’t like games like Apocalypse World is that the author uses Authoritative Voice: in essence, they tell you there’s only one way to play their game and any other way is doing it wrong. It’s easy to see how this could turn off many people, especially those who have grown up houseruling and hacking their games to make them more suited to them. That said, the reason Apocalypse World uses authoritative voice in the GM’s section is because without the Agendas and Principles laid out for the GM, the game doesn’t actually work very well. Games that use the PbtA framework well are narrow; that’s the main reason that Apocalypse World and Dungeon World and all the others are published as different games as opposed to splatbooks for some theoretical core system. Part of that narrowness is that these games will only work for primarily story-driven games. What the Agendas and Principles tell the GM is not how to run RPGs, they tell the GM how to run this RPG, and that’s an important distinction. Many of the items in the GM Agendas and Principles are good advice for all games (i.e. “Be a fan of the characters”), but taking them all in whole is what enables the GM to run a good PbtA game.

PbtA games have become popular for two reasons. First, they’ve enabled a mode of gameplay and storytelling that hasn’t been available through traditional games very easily, and they do it in a way that’s much easier to GM (as opposed to, say, hexcrawling, which has a similar “play to find out what happens” philosophy but requires tons more prep and materials). Second, they’ve provided an avenue to narrative gaming that looks familiar to veteran players and preserves the game elements that drew a lot of people to RPGs in the first place. If you’re looking for a way to run a game that places more emphasis on relationships, drama, and characters, there’s probably already a PbtA game for your favorite genre out there.

Monster of the Week (Supernatural Investigation)

Ready to level up your PbtA? There is now a companion follow-up to the Novice’s Guide. Check out Powered by the Apocalypse 201!

51 thoughts on “Level One Wonk: A Novice’s Guide to Powered by the Apocalypse”