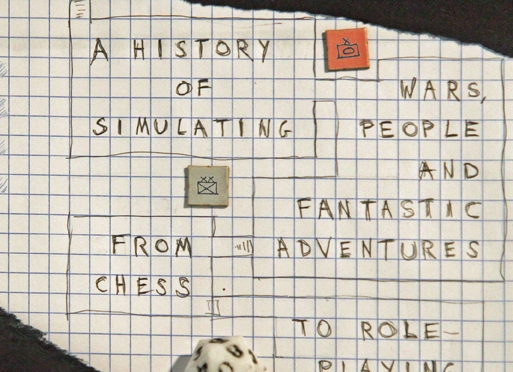 Are you a Butt-Kicker, a Specialist, or a Story-Teller? There is a huge world of games out there to satisfy every player’s and group’s style. And while there are academic discussions in every corner of the internet, sometimes it’s best to start at level one. Join the Level One Wonk in exploring the possibilities that RPGs have to offer, from Aberrant to Zorcerer of Zo. This week, instead of writing about games, we’re writing about writing about games! Let’s check out Jon Peterson’s Playing at the World, an exhaustive tome about how D&D came to be.

Role-playing games as a discrete hobby is a relatively young one. Dungeons and Dragons (D&D) is, with a fair amount of certainty, the first product taking the form we now know as a “role-playing game”, and it was first published in 1974. D&D did not arise from a vacuum, though, and it was a combination of disparate elements from the fandoms of the 1960s and 70s as well as a number of elemental concepts that eventually gelled into the hobby we now know and love. Jon Peterson dove deep into these elements, researching European history and trolling auctions for long-lost fanzines to create Playing at the World, arguably the most definitive history of D&D out there. While the book clocks in at a hefty 700 pages, it is a work of rigorously defined scope which can really only be the first book of many that one must read to get the full picture of the history of the role-playing hobby. To be clear, though, my only complaint about this book is that I wanted to read more.

The book, roughly, breaks down into two sections. There is a carefully documented history which begins in 1964 with developments in the American wargaming community. This was around the time that one Gary Gygax was beginning to become more involved in midwestern gaming circles, contributing to hobbyist magazines and organizing gaming clubs. In the initial section, running from 1964 to 1974, Peterson examines not only Gygax’s achievements, but also how medieval and then fantasy gaming became popular in wargaming circles that initially rejected them. There’s also a significant amount of research into the developments that helped create the unique experience of “role-playing games” around that time. From Napoleonic wargaming scenarios called “Braunsteins” (named after the first such scenario that was written) through Dave Arneson’s group that played through his setting of Blackmoor prior to the D&D rules existing, the events that led up to the creation of D&D are chronicled in painstaking detail. The second section of historical investigation runs from 1974 to 1977, covering D&D’s first printing as well as how it was disseminated so widely in only a few short years. This section ends at the beginning of the first releases of Advanced Dungeons and Dragons, as well as the very first competitors arriving on the scene.

The other major section of the book looks at historical precedents of Setting, System, and Character. Setting covers the recent history of popular fantasy fiction, examining how mythology and pulp fiction led to the swords-and-sorcery genre that Gygax listed as his most significant influence. Of course, Tolkien isn’t ignored here, even if Gygax may have preferred otherwise at the time. System covers the history of wargames; the chapter starts at a high level with Chess in the 7th century but the major focus starts with the 18th and 19th century Prussian kriegsspiel rules and goes until the mid 20th century, when fatigue from two world wars helped motivate a shift to “anachronistic” historical and eventually fantasy wargaming. Character covers the nature of role-playing and how it existed prior to role-playing games. This is one of the most interesting bits of history, and looks at several role-playing exercises of fairly large size, like Coventry which came from West Coast science fiction fandom and Midgard from the UK which also had some more game-like aspects in some of its incarnations.

This book strikes the balance between pleasure reading and academic text very well. The entire exercise is rigorously footnoted and as objective as possible but avoids coming across as dry or dull. The history sections are intense; I can’t imagine that there is another book out there (let alone one shorter) that manages to cover as much of the relevant history to role-playing games as Peterson does. That said, there are two caveats which are both important to most avid history readers. First, Peterson has attempted to provide an objective look at the first chapter of RPG history. While Peterson’s efforts to find and use primary sources enhances the book tremendously, his attempt to strive towards objectivity means that some of the more (in)famous parts of the D&D story, like the falling out between Gygax and Arneson, are covered very lightly. Peterson notes this in the foreword, and it’s a clear contrast between this book and a book like Empire of Imagination which is much more of a biography than a history text.

The second important caveat about this book is where it ends. Peterson chose to limit the scope of his book to Dungeons and Dragons, mentioning subsequent RPGs only in passing. This is likely a good scope decision, especially considering how long the book is already. That said, most gamers are going to find that the story ends just at the point where they want to know more; not only is there 40+ years of role-playing left to cover, but D&D itself was still evolving. While Peterson covers the beginning of the Basic Set and Holmes’ contributions, there are many who would argue that stopping the history before Frank Mentzner and Tom Moldvay got involved make it incomplete. The question here comes down to deciding on a point where the role-playing hobby no longer needed to be “born”. In 1977 not only had a revision to D&D begun, but there were now competing games. As much as we the hobbyists thirst for more, Peterson does present his arguments for scope cogently (not to mention that if he wrote all the way to 1985 the book could easily grow another 300 pages!).

I highly enjoyed reading this book, and recommend it to anyone interested in the history of gaming. There’s a whole other story of gaming after 1977 but, for the early era and the genre’s historical antecedents, this book delivers.

Playing at the World is available on Amazon. See also Jon Peterson’s blog, where he continues examination of artifacts and ephemera from the early days of RPGs.

4 thoughts on “Level One Wonk Reviews: Playing At The World”