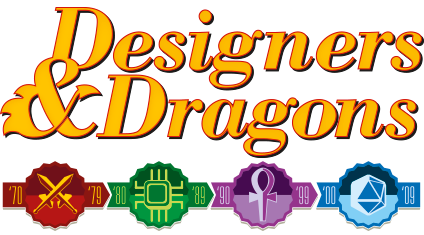 Are you a Butt-Kicker, a Specialist, or a Story-Teller? There is a huge world of games out there to satisfy every player’s and group’s style. And while there are academic discussions in every corner of the internet, sometimes it’s best to start at level one. Join the Level One Wonk in exploring the possibilities that RPGs have to offer, from Aberrant to Zorcerer of Zo. Today we go back to the wonkiness of RPG histories and take a look at Shannon Appelcline’s Designers and Dragons!

A couple of months ago, I reviewed Jon Peterson’s Playing At The World, a comprehensive look at the genesis of Dungeons and Dragons and the role-playing game in general. One of the comments I made was that, despite being over 700 pages long, Playing At The World left me wanting more, especially wanting to know what happened after Peterson’s history ended around 1981. Well, dear readers, I’m happy to report that there is more RPG history out there. A whole lot more. About 1600 pages more, to be precise.

What I’m talking about is Designers and Dragons, Shannon Appelcline’s magnum opus of RPG history, originally released in 2013 and then expanded, cleaned up and re-published by Evil Hat about a year later. The newest edition is a series of four volumes, each covering one decade of RPG history: the 70s, the 80s, the 90s, and the 00s. The book is organized into chapters by company, with each volume consisting of biographies of the most influential companies from each decade. The entries vary in length depending on the length of the company’s existence as well as its impact; TSR takes up a large portion of the 70s book while Wizards of the Coast has a significant chunk of the 90s book. While the book has a lot of research in a similar vein to what Peterson did with Playing at the World, many of the entries, especially more recent ones, draw from both more frequent internet coverage of the companies in question as well as primary source interviews and fact-checking. I trust that the section covering R. Talsorian is fairly comprehensive when Mike Pondsmith himself is listed as a fact-checker, for example.

Before getting into the meat of the writing, let me talk a bit about the layout of this book. Evil Hat is the publisher, and they approached making the book accessible in the same way they would for an RPG sourcebook. Every entry in the book has a section at the end that lists every contextual crossover I could think of. If you want to look for companies that designers in the entry worked at previously or subsequently, they’re listed. If you want to look for companies writing games of the same genre as the company in the entry, they’re listed. To top it off, these cross-references are also categorized by which book they appear in, so you know if you need to flip through the one you’re holding or pick up one of the other three. It is a very well-designed reference book, easily besting any textbook I ever used in my college years (whose deficiencies in cross-referencing often showed up through dozens of sticky notes hanging out the sides). And beyond that, each edition has a comprehensive index as well.

The writing in these volumes is very good, and each entry is designed to be read independently. Reading the book straight through like I did is going to be a trial for all but the fastest or most academic readers, due almost entirely to the length. As the design and intention of the cross-referencing shows, though, the books don’t have to be read like that. Each entry stands alone well enough that reading only sections of the book or reading through to follow a particular game system or designer are both easier and likely more fun than reading the series as a single entity. That all said, I did read the entire series as a single entity, and it was very good at keeping my attention as far as 1600-page books go. Even if you’re not the type to digest long tomes in a couple weeks (or less), The book is still an excellent reference work, one of the best as far as RPG history goes.

There is one wrinkle in the history that begins to show itself in the 90s book and becomes more apparent in the 2000s book. The book came out in 2014, right during the D&D Next playtests that would become Fifth Edition. The histories of Wizards and Paizo end before that game’s release which has since had a dramatic impact on the industry. I can’t fault Shannon or the Evil Hat team for any of this, it’s simply a case of bad timing. There are other recent developments which affect a number of companies in the 2000s book, but only the 5e release is significant enough for its absence to be palpably noticed. There is an additional book available in the series, the “Platinum Appendix”, which includes yearly chronicles from 2008 to 2014 as well as a collected index and some other essays. There are also additional yearly chronicles for 2015 and 2016 available online as part of Shannon’s “Advanced Designers and Dragons” column on RPGnet. Ultimately this is the hazard of writing history so close to the present day, and while it doesn’t appear the books will be revised any time soon (Shannon has moved on to other equally ambitious history projects), the information does exist and has been collected.

“Gaming reference” is one of the few genres I can think of that’s even more niche than tabletop gaming itself. That said, reference works and history are valuable reads for anyone who wants to investigate the hobby more deeply. Designers and Dragons helped answer some questions I had about gaming, both as old as Traveller and as new as the OSR. It also presented the design sequences of many of the games talked about in the series as their own narratives: narratives with common themes and often very similar endings. Beyond the reference value, Designers and Dragons is also a collection of nearly 50 years worth of cautionary tales about the industry. For a game player the book may be a fun history lesson, but for a game designer it’s also a valuable collection of virtually every mistake made in the industry, lovingly catalogued and cross-referenced (“For another game which blew up their continuity and alienated their core playerbase, read about…”). So while the book is fun for wonky types, it’s also likely a must-read for anyone looking to design and sell an RPG. Knowing how much I learned reading these books, I can’t wait for Shannon’s next project.

Designers and Dragons is available at DriveThruRPG.

2 thoughts on “Level One Wonk Reviews: Designers and Dragons”