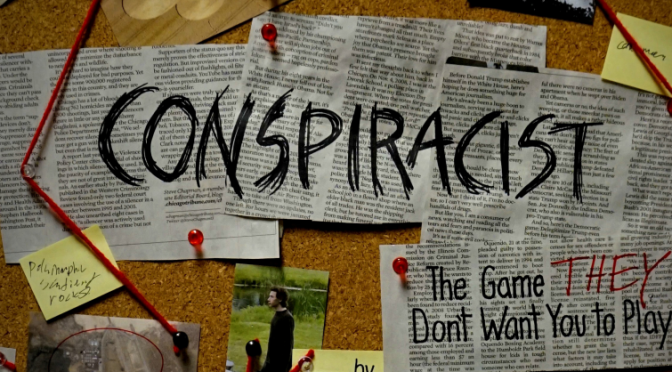 Shadow people stalk the back alleys. Reptilians disguise themselves as humans and prowl through our society. The Grays descend from the stars to carry out who-knows-what kind of experiments on whatever people or animals they can seize. Behind the scenes the Illuminati manipulate all this and more to an end known only to them, and it’s your job to keep it all under wraps. It’s not going to be easy, with all the cults and conspiracy theorists running around. Especially considering the only mission briefing you got was a red d20 with every face reading 9. You’re caught in the web of madness that is Conspiracist: The Game THEY Don’t Want You to Play!

Conspiracist: The Game THEY Don’t Want You to Play! is a rules-light roleplaying game created by Stirling Joyner and his Playful Leviathan Press. The player characters are cast as the somewhat hapless minions of the world-spanning Illuminati conspiracy, tasked with serving the group’s interests and keeping the various secrets and conspiracies from boiling over. The player characters don’t really know what their masters want or what’s really even going on, but they’ve got to muddle through regardless. It is, basically, a game about conspiracy theories and the poor middle men stuck dealing with them. When I asked Stirling some questions about the game, exactly why this is the subject matter he wanted to cover was the first one I asked.

“My inspiration largely came from watching conspiracy theory videos on YouTube and the History Channel. I saw these theories and started to wonder under what bizarre conditions they would actually be true. I wondered what hilarious stories would come from the middle men who execute these elaborate plans with no understanding of what was happening or why. Conspiracist is really all about answering those questions, telling those stories, and laughing at the absurdity of it all.”

Character creation is very simple. You’re either human, in which you case you don’t get any bonuses, or a reptilian in disguise, in which case you have a bonus to senses and can change form but may be exposed if your disguise wavers. From there you have Specialties, areas in which your character excels, such as Scientific Assassination or Crowdsourced Information Gathering. If you’re doing something related to one of your Specialties (you have two, unless there are more than three players, in which case you have one) you automatically succeed. Finally you have your Occupation, which gives you some sort of bonus from free information to another Specialty, and a Motivation that acts as the reason you joined the Illuminati’s henchmen and a roleplaying tool for the game.

Gameplay is equally simple. Whenever you need to roll, and don’t automatically succeed thanks to a Specialty, you roll a single d4. A 3 or more is a success. Less than that is a failure, and the GM (referred to as a Controller) creates a Complication for the player character. There’s not a lot of ways to get a +x of any kind to the roll, so most of the time you’re effectively flipping a coin.

As for how the player characters get started on a mission? They’re presented with a single item, whether it’s a YouTube video, a bit of food, a die, a prank phone call to a pizza place, or whatever the Controller decides. From there the players have to figure out what the briefing could mean (and by figure out, I mean make up), and then try to unravel the conspiracy and chaos so that they can keep the Illuminati’s agenda on track.

So, of course, I asked Stirling about the rules, because that’s certainly different.

“First of all, I have a lot of respect for simple, tightly focused rulesets that do one thing very well. Games like Fiasco, MAID, and Time Wizards! are all lurking somewhere in the background here mechanically. The rules are all about creating that “ideal” experience as straightforwardly as possible. In Conspiracist, the goal is to go from a simple set-up to an outlandish conspiracy theory, and the rules guide you there. You roll a d4, on a 3+ you succeed, less than three you get a Complication. This ensures that ~50% of what the characters do causes the plot to get more complicated. With new plot elements being introduced that often, there’s nowhere to go but weird and convoluted. The Specialties and other abilities exist to mitigate this somewhat, so the players can feel a little more in-control of things. Originally the system just used a coin flip, but then I realized that d4s are pyramids and I was not going to pass that up.

An important feature of Conspiracist is that there are no hit points or status effects, only character descriptions and outcomes. I wanted the game to focus on the frantic evolution of the story. Most nitty-gritty numerical details would have gotten in the way of the experience I was trying to create, so I left things like that out of the game.

As for the mission generation mechanic, I wanted the game to be impromptu and I wanted to get everyone in the conspiracy mood right from the start. I stole the idea straight from Peladophobian’s Illuminati Confirmed videos. I’m not sure how I connected the dots to make those videos into a game mechanic, but Conspiracist has always been “Illuminati Confirmed Videos: the RPG”, so it was definitely a good fit.”

By the time you get to page three of the game it’s telling you that it’s more or less built around the idea of being played as an ‘impromptu one-shot’, although multi-session games are not impossible.

“I wouldn’t say it’s strictly for one-shots, but it is ideal for one-shots. Every RPG is built with an assumption about how it ought to be played, whether that’s explicit or not. So the biggest reason Conspiracist is designed for one-shots has to do with my vision for the “ideal” experience of the game. Things start relatively normal, but the weirdness grows exponentially until the plot is so incoherent it just collapses under its own weight. The internal logic of the world falls apart so completely that it doesn’t make intuitive sense to pick up where you left off next session. Conspiracist certainly doesn’t have to go to that extreme. You can bring the story to a meaningful resolution very easily. However, that sort of gonzo vibe lends itself best to one-off games.”

A fair bit of the book is given over to examples of missions, mission briefings, different types of conspiracies, and resources for Controllers and players to learn more about conspiracy theories in general so that they can better contribute to the game. I asked Stirling to provide an example of play, the “craziest/most exciting/most ridiculous” to be precise, that he encountered during playtesting.

“The mission briefing was a 24 pack of Ice Mountain water bottles. My players concluded that they had to go to Ice Mountain (which turned out to be an actual place in real life) to stop Pokémon Go cultists from fluoridating the water supply. Underneath the mountain they discovered an ancient alien temple. It turned out that Pokémon are real but were actually ancient aliens who were going to mutate humans into Pokémon. It turned out that their mountain guide was actually a shadow person in disguise and that the shadow people were at war with Pokémon. It ended with a battle between a swarm of shadow people and the Pokéball mothership for the fate of mankind.”

So, are there are any future projects ahead for Conspiracist, Stirling, and Playful Leviathan Press?

“Yes! The project I’m most excited about right now is my new RPG called Craftwork. I’m describing it as postmodern Lovecraftian horror. Lovecraft evoked the fear of the unknown using ideas which have now become familiar and cliched. It seems like every other game coming out now is pitched as “X, but with a Lovecraftian twist!”. In keeping with that convention, Craftwork is Lovecraftian horror, but with a Lovecraftian twist. The big ideas in Craftwork are to help GMs subvert their players’ genre expectations to create even more horror; give GMs the tools to think like Lovecraft and apply that to almost any story or setting; and to help players experience the story from within the mind of their character. My team and I are also working on two expansions for Conspiracist: one based on supertechnology that will feature androids as a playable race, and another based on the paranormal which will make shadow people a playable race. Farther down the pipeline is Conspiracist: WE NEED TO GO DEEPER Edition, which will support campaign play, and a hack of Conspiracist called Cthuminati where you play as cultists of the Old Ones instead of Illuminati agents.”

“Whether you’re a player or a Controller, Conspiracist can stretch you. It really requires you to trust-fall into your own creativity and improv skills. There are lots of opportunities for players to try out weird character concepts and if you go all-in the results are brilliant. Similarly for Controllers, you really have to think on your feet and be okay with having no idea where any of this is going until it goes there. For Controllers who dislike going in blind, I recommend making a sparse outline after mission generation. Just having some notes to yourself about what you think will happen and what challenges the players will face can help a lot. If you ever draw a blank on ideas, poll your players. I guarantee they’ll have something brilliant.”

Conspiracist is available at DriveThruRPG for the always delightful price of Pay-What-You-Want, where as of this writing it is a Best Copper Seller. Playful Leviathan also offers a free Fiasco playset based on Eclipse Phase which looks pretty good! You can find more information, such as a link to PLP’s Patreon, at their own site, and you can find Stirling on Twitter @sjrpgdesign.

Thanks to Stirling for getting in touch with us and for answering our questions about the game! Know of a game you’d like to see reviewed by The Independents? Better yet, have a game of your own? Get in touch @HungryHalfling on Twitter or at cannibalhalflinggaming@gmail.com! If you like what Cannibal Halfling Gaming is doing and want to support us, tell your friends about us and consider becoming a Patron!