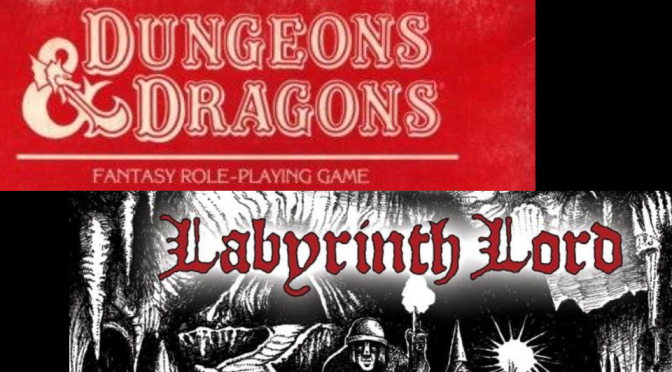 Dungeons and Dragons, by many standards, lives up to Wizards of the Coast’s claim of “The World’s Greatest Role-Playing Game”. It has the longest history and the greatest impact of any game, paving the way for the expansive role-playing hobby we have today. And the versions published in the 1980s are those which had the strongest impact on one of the earliest generations of gamers. Between TSR’s mismanagement and the limitations of technology, though, these early versions were almost lost to history. The desire to rekindle support for the playstyle of Basic D&D was one of the collective motivations which kindled the OSR, or Old School Revival, movement. Today’s System Split splits four ways, looking both at two versions of Basic D&D (B/X and Rules Cyclopedia) and Retroclones which were designed to give them renewed accessibility: Labyrinth Lord and Dark Dungeons.

There was one key mistake Wizards made when rebooting D&D in 1999, and that was chopping the “Advanced” off of Dungeons and Dragons. It made sense from a marketing perspective, but it contributed both to confusion and a sense of abandonment, if not erasure, of the Basic D&D products. This was an issue in 1999 because all of the products were long out of print and, given the financial situation of TSR when Wizards bought them, this wasn’t going to change any time soon. To add insult to injury, Third Edition was, at the time, the most dramatic departure from the original D&D rules of any edition. Fortunately, there was a tool to save the older games in the form of the Open Gaming License, or OGL.

In the United States, game mechanics are not considered copyright-able. The OGL was built around this concept and allowed games to not only use the mechanics but also “terms of art” from D&D that would otherwise be copyright-able, like “hit points” or “armor class”. This suddenly meant that a savvy gamer could reframe one of the older games, still using most of the recognizable terms, and redistribute it without facing any copyright challenge from the original authors. Both Labyrinth Lord and Dark Dungeons fall into this category, being reframings of Basic/Expert D&D and the D&D Rules Cyclopedia, respectively.

Basic D&D is, edition-wise, a little bit of a mess which calling the current iteration “Fifth Edition” makes even worse. The history starts in 1974 with what’s now called “Original D&D”, the three pamphlet box set that was based off of Chainmail. “Advanced D&D” was published between 1977 and 1979 (if you’ve ever been annoyed at the Wizards release schedule, remember that it took three years for the 1st Edition AD&D core books to come out…and they released the Monster Manual first!), and while that was happening, Original D&D was republished as a complete book (including the three pamphlets and the Greyhawk supplement) called Basic D&D. Basic D&D went from levels 1 to . . . 3. In 1981 this was expanded with another edit of Basic D&D and the Expert rules, which went from 4 to 14. This 1981 edition is what’s now known as B/X D&D. In 1983, the Basic Set was revised again, and eventually a set of five boxed sets were released: Basic, Expert, Companion, Master, and Immortals. This is what’s now known as BECMI D&D. In 1989, Advanced D&D 2nd edition was published, which was the beginning of the end for any support of Basic or Original D&D. The last Basic product was the Rules Cyclopedia, a single-book version of the BECMI box sets, minus the funky Immortals one (which was placed into a separate revised product around the same time). So, when Third Edition came out, chopping that ‘A’ off was a severe misnomer. In order to be accurate, it should have either been Third Edition AD&D, or Eighth Edition D&D. Guess that didn’t roll off the tongue as well.

So between 1999 and 2013, there was an OGL but no Basic D&D. This is the environment that Dark Dungeons and Labyrinth Lord emerged from. Both are freely available D&D clones which make minor rules tweaks and integrate errata. Dark Dungeons is based on the Rules Cyclopedia, and re-integrates the Immortals rules that were excised from the original book. There’s also some changes to optional rules in the Rules Cyclopedia, most noticeably Weapon Mastery. Labyrinth Lord is based on Basic/Expert D&D, but takes the advancement mechanics and stretches them out to 20 levels instead of 14. There are still experience caps on demihumans, so playing an elf or a dwarf (the game still has race-as-class, like Basic D&D) may see you capped to as few as 10 levels. In both games, there are many tweaks to specifics, but unless you either have years of experience with the originals or both books out in front of you, you will not notice the vast majority of them.

The very minor degree of differences is important, because by 2013, Wizards had swung too far in both directions with licensing. The OGL was an excellent legal precursor to many openly licensed systems today (Fate and Apocalypse World among them), but the d20 branding was offered much too loosely, losing Wizards creative control and unleashing a torrent of mediocre products. Their response with Fourth Edition wasn’t much better, closing off the licensing and leaving many of the better d20 publishers hung out to dry. When it was time for Fifth Edition, Wizards eventually returned to the OGL, but without the laissez-faire attitude around their branding. More importantly to this story, Wizards began selling all of the older D&D editions in PDF form, and even made a special (and very expensive) reprint of Original D&D in time for the game’s 40th anniversary in 2014.

The reprints made a lot of fans very happy; now instead of buying, for example, an old copy of Rules Cyclopedia for between $80 and $100 from a collector, you could get the PDF for ten bucks. But there’s one very important split between these games and the retroclones: the original games were not remastered in any way. The Rules Cyclopedia had very dense text as a book, and now as a scanned PDF it’s even harder to read. Both Labyrinth Lord and Dark Dungeons are fully digital PDFs with built-in linking, searchable text, and all the other modern niceties we’ve come to expect in game PDFs. And if you aren’t dead set on playing exactly the same D&D you would have in 1985, that is a really big deal.

In some ways this isn’t a traditional System Split because when looking at the retroclones and their originals, the differences are incredibly minor, in many cases smaller than the range of house rules a gaming table may have used when playing. The differences between B/X D&D and BECMI/Rules Cyclopedia are worth noting, though. Essentially, if someone is waxing nostalgic about when there were fewer rules and you just rolled dice and went with it, they’re talking about B/X D&D. B/X D&D is simple, and compared to both AD&D and BECMI D&D has much less cruft and nonsense in it. Labyrinth Lord is less than half the length of Dark Dungeons, and both of the clones are shorter than the originals they’re based off of (mostly due to better editing and removal of a lot of commentary). BECMI D&D contains what’s in B/X, and then adds 150% more stuff. On one hand, the Companion is filled with stuff that I desperately wish was still in modern editions of D&D. The dominion rules are, while a bit fiddly, really comprehensive and interesting, as are the mass combat rules. There was actually a consideration of what it would mean to be 15th level at something in this book, and I believe that having a stronghold and a fiefdom is much more epic than continuing to get progressively stronger magic items for another ten levels. On the other hand, Master and Immortals are downright bonkers. Master level is where you get into magical artifacts and communing with gods, a lot of elements that would make their way into epic-level guidebooks in Third and Fourth Edition. Immortals . . . whew. You basically stop rolling dice, and start spending XP to make miracles happen. Mechanically it reminds me a bit of White Wolf’s Scion, but with even fewer mechanical boundaries. I can see why Scion, Exalted, and eventually Godbound (which comes full circle, being an OSR game) were written to play in that power level, because Immortals is an intriguing piece of writing but looks completely unplayable, and that’s even with the Dark Dungeons version that took into account revisions and errata.

While B/X D&D justifies the stereotype of old-school gaming being relatively simple, BECMI and Rules Cyclopedia D&D were full of stuff, including a lot of systems that people barely recognize as D&D any more. AD&D winning out over Basic meant that a lot of the additional rules that showed up in the later box sets were dropped or simplified, and a lot more love was given to the core systems that made up the game: combat, exploration, and dungeoneering. I don’t wish to return to Basic D&D (honestly, I don’t even wish to return to Third Edition), but I think a lot of the material in BECMI that disappeared from AD&D should be re-examined. I’m not alone in this; epic levels (Master material) and stronghold building (Companion material) both showed up in Third edition, and epic tier was part of Fourth as well. But when looking at Fifth Edition, there are yawning gaps that deserve to be filled. There are some indications that Wizards is listening; mass combat is currently available for Fifth Edition through Wizard’s Unearthed Arcana collection of articles. But even so, if the newer games aren’t to your taste, there are retroclones for every flavor. You can double down on some of the unique stuff that isn’t really part of D&D any more (Adventurer, Conqueror, King) or you can go even simpler than D&D was originally (Swords and Wizardry, Microlite74). Whatever you remember about “playing D&D”, someone has likely written a retroclone for you. Thanks to Wizards, you can now go back to the originals too. Truly, the OSR has accomplished what they set out to do: keep the old games alive.