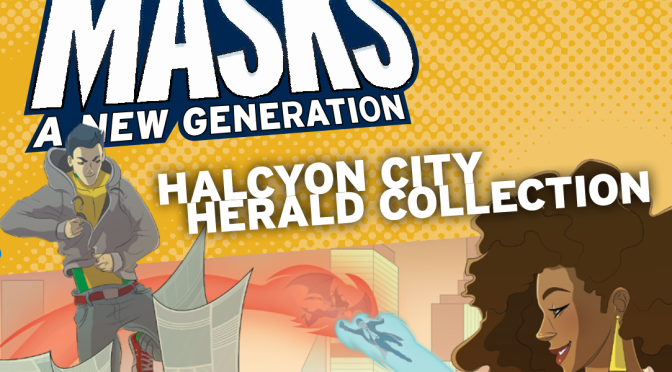 Keandra Hunt spent a long time working the journalism beat in Halcyon City, eventually rising to Editor-in-Chief of the Halcyon City Herald and its many associated publications. Nobody can stay in this business forever though, tracking down the truth of the City and its many superpowered events. Hunt is finally moving on, but she’s got one last bit of editing to do. She’s leaving behind a portfolio of interviews, articles, reports, and pictures all selected from her time as Editor-in-Chief. Her successor will get it as an inspiration, a challenge, and a warning. We get it as the Halcyon City Herald Collection, the first supplement for Masks: A New Generation!

Promised by Magpie Games’ Brendan Conway when I interviewed him as the first supplement for Masks: A New Generation (and, coincidentally, the first time The Independents get to look at a supplement for a game already examined), the Halcyon City Herald Collection is one part new playbooks, one part new moves, and all parts an inspirational tool and idea farm. The majority of the book’s ~128 pages is devoted to in-universe articles written by a variety of Halcyon City’s journalists about an even wider variety of topics, all focused on the super facets of the city. New moves are scattered throughout these stories to give some mechanical heft to what’s described within them. Finally, there are five ‘limited edition’ playbooks, originally exclusive to Masks’ Kickstarter backers and now available to all via the Collection. I’m going to take things in reverse here and look at the playbooks first.

Like many supplemental, bonus, or limited edition playbooks in other Powered by the Apocalypse games the HCHC playbooks are recommended to be singular in nature: think carefully before allowing more than one in your campaign, they say. This is because these playbooks have a huge amount of story baked into them. Now, yes, this is Masks and PbtA, there’s always story baked right into the playbooks if the writers are doing their job correctly, but each of these ones are by their very nature going to have a drastic effect on the story. The Innocent is the past heroic version of a modern day villain, flung into the present, immediately involving the City’s history and their present self. The Joined is intimately tied to another character using a different playbook, sharing some of their powers and traits, giving both more weight in the story. The Newborn is freshly created, a character who has even more to figure out about who they are and what their purpose is than most Masks characters. The Reformed is just that, a former teenage supervillain who is trying to turn over a new leaf, way more dangerous than even the core book’s Delinquent and still possessing ties to the villains of the city. The Star is an outright famous celebrity of a hero, something the core playbooks are told they cannot be yet, with an audience that actively loves them.

They’re different. They’re very specific types of heroes, so they’re not going to be for everyone, and some of them (particularly the Joined, who has to work carefully with their chosen emulated character’s player) are going to take a bit of extra work. That doesn’t stop any of them from being cool. They look fun to play, there’s plenty of advice for both the player and the GM on how to get the most out of them, and they can provide some really good story material. Also, as promised by Conway, the full playbooks and moves are included in the book this time. While the HCHC is only in PDF form at the moment, and that means the only benefit of that is one less open document if you’re playing with a computer/tablet, it still makes it easier to reference, and come the day it’s in print that’ll be even more noticeable.

Now, for the actual stories of Keandra Hunt’s portfolio! As mentioned above, they’re presented as articles written by a number of different authors for a number of different publications under the umbrella of the Herald, looking like pages printed out and then taped into a scrapbook of sorts. Some are interviews, some are reports. Some stick to the facts, some are clearly personal opinions and editorials. Hunt has scribbled little notes in the margins of her portfolio, pointing out oddities, mysteries, and unanswered questions of her own, likely to prompt her successor into pursuing them (or learning not to when it gets too dangerous). From several examples of ‘Hiro’s Hot Takes’, which are concerned mostly with the appearance and behavior of heroes, to questions of human vs. metahuman right and privileges, to studies of different super phenomena like magic and alternate universes, there’s a lot of different material here (helped, no doubt, by the fact that they’re written by a bunch of different real-life writers as well).

For every article there is also at least one new move written out in a sidebar, providing a game mechanic to help GMs and players integrate the article’s material into their own game. By and large I like these new moves. Some could be used in any game, such as tap into eldritch powers for when a hero tries to muck about with something magical. Other moves are only going to make sense if the very specific material mentioned in the article is incorporated into your game; gaze into the Spectacles of Tomorrow isn’t going to be of any practical use unless the Spectacles are actually in play. However, even ones you can’t use in your own game can provide inspiration for making Custom Moves of your own; there are a lot of different examples to look over, showing off some of what can be done when you leave the moves-as-written behind.

Aside from the moves, though, the main purpose of the articles is to provide inspiration to both players and the GM. With all their different topics they provide some insight into what life in Halcyon City is like, providing heroes, villains, issues, and questions for everyone to use or go up against. In that the HCHC has succeeded. I don’t know, as of this writing, whether or not anything here might see use in High Impact Heroics (things have already developed there in some specific ways), but I’ll be keeping the Collection in mind going forward. But here’s the final point I want to make in its favor: the stories are just straight up well written and fun to read. I don’t know that I’d go quite so far as to recommend the Halcyon City Herald Collection to someone who’ll never be interested in playing Masks or who doesn’t like superheroes, but to everyone else I’d say that you’re just going to enjoy reading this book, whether or not any of the material ever makes it to your table.

The Halcyon City Herald Collection is now available at DriveThruRPG, for the cost of $11.99, and includes both the PDF of the book and a separate download of just the new playbooks.