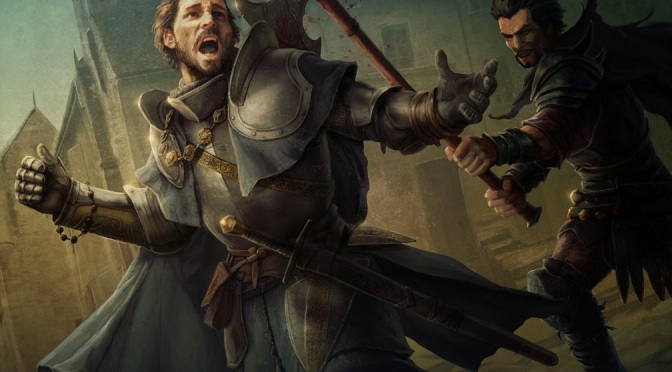 The party has made it to the throne room of the dark lord, stumbling from wounds and shepherding the last of their spells and strength. As they enter the lord stands up and boasts of how outmatched they are, and it’s hard to argue with him as minions lurk in the shadows. Still, the cleric steps forth to rebuke the dark one – only to gurgle as the tip of a short sword emerges from his chest. As the body falls and party members turn to face the culprit the party rogue holds up his bloody blade and swears fealty to the dark lord. Around the table players turn themselves to face the rogue’s player, voices starting to rise, as he shrugs and says “It’s what my character would do!”

If you’ve been playing tabletop roleplaying games for a decent length of time it’s probable, if not guaranteed, that you’ve heard those six words and just winced a little. Maybe you’ve even said them yourselves. For the uninitiated, and those who have been lucky, those six words said in a defensive tone represent one of the more ironic problems you could run into at a game table: a player taking their character’s characterization too far.

Players are, ideally, supposed to be thinking about what our character would do compared to what we the player would do. They’re called roleplaying games for a reason; you’re supposed to play the role, right? But that stops being fun for everyone involved when that role becomes an excuse you use for behavior that accomplishes your goals at the cost of angering everyone else at the table.

Heck, I’ve done it myself. I was playing a rogue, a fellow player’s body was stuffed in a sack for later resurrection (he may also have not really been dead, but that’s another thing). Our campaign’s version of Vecna made an appearance, and offered the contents of his library that we’d already passed through in exchange for the body. In a moment of rogueish greed, I handed over the sack before anyone could stop me. I knew almost right away that I’d made a mistake, between the wizard trying to kill me and Vecna having cleared out his library leaving behind only a book entitled “How to Deal with Loss”. But I still said that, hey, I’m a rogue, greedy idiocy is what my character would do now and again. That had me dodging another fireball.

It’s been more than a decade, and the group involved still won’t let me live it down (in a good-natured way), and I never did get the contents of that library.

So, how can this little problem be dealt with? If you the player notice that you’re causing an unexpected uproar, it’s time to maybe consider walking back whatever you just did, or at least talking it out. If you’re the GM, a minor offense could probably be ignored, such as getting the party into a fight they might otherwise have avoided, but if there are repeat offenses that make the rest of the players start to view the one as a liability or problem then it’s time for you to step in. A talk outside of the session is best, although you might have to come down hard during the game if things start getting ugly around the table.

That all works well enough, but the best way to avoid the problem is for a given player to keep themselves from doing it in the first place, particularly if they’ve got a character who is likely to commit actions that make things tougher for the others because of morals (or lack of) or personal motivating factors. For an example of how this was handled well, let me tell you about a little murderbot called HK-42.

HK-42 was the Gunner of a Star Wars: Age of Rebellion team known as the Troubleshooters, and he liked fire. He liked fire a lot, and he liked sharing it with others via his Alliance-issued flame projector. This happened so often than fire was incorporated into the unit’s shoulder patch when they got one. His characterization was a somewhat more friendly version of HK-47, hence the designation, and one of the very first quotes we saved from that campaign was “Statement: Organics are delightfully flammable. I actually consider that to be their best property.” This guy had disaster written all over him; great in a fight, but potentially even better at getting us into fights we were trying to avoid, and we found ourselves in a surprising number of situations where starting a fight would ruin everything.

And yet the dreaded words were never spoken over the course of months of play, until poor 42 met his end under the cannon of a Dark Trooper at the Antar TIE Facility. How was that managed? Another quote: “QUESTION: I see you accidentally left your stun setting on, would you like me to burn her?” The trick was that 42’s player never went off the handle without first checking with the rest of the party. And if anybody objected to burning the latest target of 42’s interest? Well, then they wouldn’t get burned, until the situation deteriorated and 42 was given a go-ahead.

This is how you can play a trigger-happy character, a greedy character, an overly righteous character, an insane character, an evil character without being disruptive to the group as a whole: remember that you’re part of a group, and that the group as a whole is stronger and more likely to be able to help you accomplish your goals if they’re not pulling your dagger out of their backs or running damage control on a mess you’ve made for them. If you can bring that mentality out of the meta-game and into your character’s personality, so much the better: here‘s an excellent little chat between Keyleth and Grog of Critical Role about his reason for keeping his Rage in check.

Sometimes you might find your character faced with something that they really would want to do, not just a bad habit or an impulse. Like selling a friend’s corpse to the god of undeath, lies, and secrets in exchange for phenomenal knowledge (or at least the promise of it). Or maybe you’ve been nice and accommodating to the do-gooders in your group for a long time now, but that’s a Sith artifact promising you phenomenal cosmic power without any living space restrictions. Talk it out. Break character for a minute. Voice what your character is thinking, give your fellow players a chance to talk you out of it. For an example of a good guy doing this, in a Force and Destiny game J4-CE (why is it always the droids) lacked some context clues relating to a Force vision that said the galaxy would burn, and given what he knew genuinely thought that something the rest of the party was about to do was going to be the cause. The player could have just rolled the dice (he had a flechette launcher, it would’ve done the trick), but instead he was very clear about what he was about to do and why he was doing it, which gave the rest of us a chance to ask for a reprieve so we could explain away the misunderstanding.

Of course, there might come a time when it really is what your character would do. That’s more likely to be the case in certain types of games and with certain groups, but it could happen. Your edgerunner gets outed as a cop and kills a party member to conceal their identity. A dragon has turned the team against itself, so you grasp at power as a last desperate option. Your campaign-long nemesis might get away otherwise. When you even voice your intentions without going for the shocking twist, and the party can’t come up with a good reason for you to not to, well, you’ve got to do what you’ve got to do. At that point, you should just be making sure that there aren’t any hard feelings.

Maybe offer to buy the next game night’s pizza ration.

Header image is by Jason Engle, done for Scoundrels of Skullport.