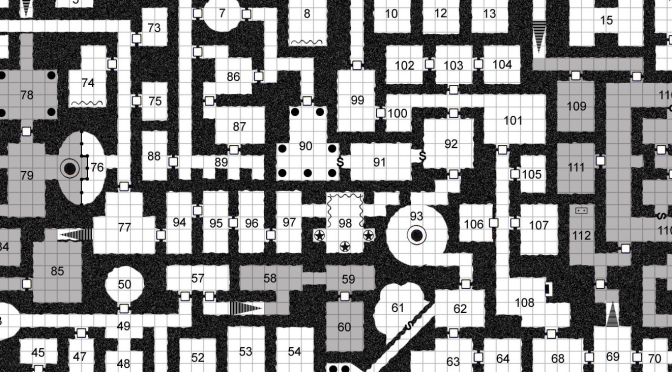 Jethro saw her for the first time. In a clearing of the thickets that had occupied their dreams for so many weeks, stood a woman adorned in a cloak of feathers, astride a white horse.

“You are all getting closer. Eventually the time will come when you can decide to open the door.” Jethro shouted questions, but before he could get a reply, he awoke. While losing time was getting to the point of normalcy, Jethro had been gone for almost a week and a half, and the party was now far away from Montral’s Mine, sitting in a supply closet in the underground research complexes of the Wizard’s College of Glebhavern.

The party had been dealing with some weirdness within the corridors they were currently skulking through. Carrion Crawlers were, to some degree, par for the course in many abandoned spaces, but Hell Hounds? Didn’t make much sense. As they made their way into the first laboratory space, things were equally strange. While the lab was strewn with research notes and other academic detritus, the main piece of furniture was a large stone arch, built within a stone circle covered with Sylvan runes. Trees were planted right into the floor around the arch, which appeared to be inactive. Hugh was able to interpret the runes, but stopped himself before reading them out loud…they were for a Gate spell. This arch was a wizard’s attempt at constructing an artificial fairy door. As Jethro entered the room, his entire body began to vibrate, starting at his fingertip and eventually reaching out to his head and feet. Remembering what the Fey said, he tried not to bring attention to it, until the sympathetic vibration of his breastplate caught the party’s attention. Even more troublesome was some of the research notes. Based on the dates within the lab notebooks, the wizards stayed in the research complexes for weeks after the city fell, protecting themselves by setting traps all throughout the labs. As there were no bodies to be found, the wizards either teleported out or used this gate they created. Both of those were troubling possibilities.

The party made their way through a maze of supply closets and disconnected passages to another lab. In addition to secret passages and magic obfuscation intended to confound and discourage students, there were a number of more hastily constructed traps that were part of the siege. Elliot disarmed a magical trigger of some sort and took it with him, not knowing what sort of threats they’d find. The next lab was even more troubling than the first, an altar within a stone circle with runes in Abyssal. The notes and texts around confirmed this was a necromancy lab, complete with five sarcophagi designed to hold cadavers for experimentation. More disturbingly, there seemed to be chewing noises coming from the sarcophagi. Lifting the lid revealed another Carrion Crawler, and the melee seemed to anger those in the other sarcophagi. The Crawlers were hardy but vulnerable, and the party dispatched them with a minimum of mishaps (though including some aim issues with the fire trap that Elliot had pilfered).

From there, the party made it into the lab’s reception area, and determined that their initial teleportation had not quite gone as expected. They did make it back, though, and knew there was more to explore. This was, roughly speaking, where things started to go wrong. The party made it down into the reception area for the two labs they had not yet explored, in the southern wing of the complex. There were three statues that were obviously gargoyles, which seemed to be part of the original security system and connected to the “hall passes” they had found in the reception areas. Though the party didn’t have enough passes, they played a game of catch to make it through the door. Which would have been fine, except for an existing problem.

The college’s entire complex was draped in a magical suggestion implanting anxiety and fear in the head of anyone who was attuned to arcane magic. In the labs was a second, significantly more intense fear effect, which would affect anyone. As Elliot crossed the threshold without a “hall pass”, he was hit full on by this effect. He bolted back to where the reception area was, and then through a corridor to the exit, passing four wizard-like characters along the way. As Elliot would soon find out, these were doppelgangers, who had observed the party walking through the reception area. As Elliot emerged to the surface, he saw the party come after him. After some stilted conversation, though, he knew something was wrong. A melee erupted, and Elliot grappled not-Ander and not-Jethro handily. Not-Hugh and not-Hrive bolted…Elliot knew from the conversation that they were heading to the castle, where the party had left the regents. Thinking quickly, he set off a signal flare and tried to get more information out of his captives.

Meanwhile, Ander had scouted ahead to find two Shadow Demons, and Elliot’s flight had woken up the gargoyles. Ander had a plan, which involved getting the Demons and Gargoyles to fight each other. Why this made sense was anyone’s guess, but the party successfully lured the demons into the reception area, just as Elliot made his return. Something was wrong, though, and Elliot was deftly striking…other party members. The two demons were dispatched, but the gargoyles took to the air and started harrying Jethro. Hugh kept him alive, but the rest of the party knew it was time to flee. Hrive and Ander made it out, while Hugh tried desperately to aid Jethro in his fight against both not-Elliot and the Gargoyles. Not-Elliot pinned him, but he was able to use fear, the emotion that got them into this mess in the first place, to get the doppelganger off. Hugh and Jethro made it topside, only to see Elliot still restraining not-Ander and not-Jethro. Hugh was able to cast a Zone of Truth, making it all too apparent what mess the party had just wandered into…

One of the big lifesavers for me in running a Dungeons and Dragons game has been the random dungeon generator on donjon.bin.sh. I am not that much of a dungeoneer, and prepping interesting dungeons has, in the past, been the longest and least fun part of my prep. Randomly generating large dungeons with (fairly) balanced encounters has made running the game easier, but random dungeons have their limitations. For one, they aren’t designed in a manner reflective of most real buildings, so it can be difficult to explain the strange number of doors or shape of corridors…this is especially true when you want the dungeon to reflect a functional building, like a school. While the original map of the Wizard’s College was, in fact, randomly generated, I did a fair amount of back-prep to ensure that the encounters and traps made some sense…and I left open questions for those which didn’t. Compared to the previous dungeons (the crypt and the mine), the College not only required more prep, it also had many more opportunities for dangling plot threads, which I think I used at least competently.

This session also highlighted one of my favorite encounter types…the dawning realization. Doppelgangers are an example of a positive dawning realization; once the players comprehend what’s going on, the encounter becomes fairly easy. I did beef up the relatively tame doppelgangers with the ability to use rolls from their lookalike’s character sheet, but even so, the monsters were dealt with fairly handily once the players figured it out. My favorite dawning realization from past gaming, though, is a negative dawning realization. In this scenario, once the players figure out what’s actually going on, they realize that the encounter is a much more serious situation than they thought, and in one I ran, realize they just got screwed. In a GURPS Cyberpunk game I ran, a pacifist character decided to betray the party after a mission turned into a large-scale terrorist attack which killed hundreds of innocents (in classic ‘PC’ form, the other players pointed out that this did in fact accomplish the objective of the mission).

The characters were in the latter half of the campaign, and had gotten complacent. The betraying character hired “extra muscle”, which the other characters didn’t vet. Then, they were gassed and locked in their own vehicle, from which the betraying character had removed the battery. The three or so turns between the gas coming in and the characters all passing out were filled with some astonishing table talk, as the players slowly realized what had happened. Both of these types of encounters can add some great drama and make the players’ minds race, but they lose their effectiveness quickly. These are once-a-campaign type moves, lest your players get bored or frustrated. It should also go without saying that you shouldn’t betray your party or allow a player to betray the party just for the hell of it. Having in-character motivation and forcing in-character subterfuge will make the payoff satisfying, so long as the in-character betrayal doesn’t cause hurt feelings out-of-character.

This won’t be the last time the characters plumb the depths of the Wizard’s College, and there are more strange gates in their future. Have any thoughts about randomly generated dungeons, or deceiving the party in-character? Feel free to sound off below, or find us on Reddit or Twitter. Adventure Log will return in the New Year!

Want to know more about what’s going on? Check out the previous Adventure Log here, go to the next one here, or start at the beginning.