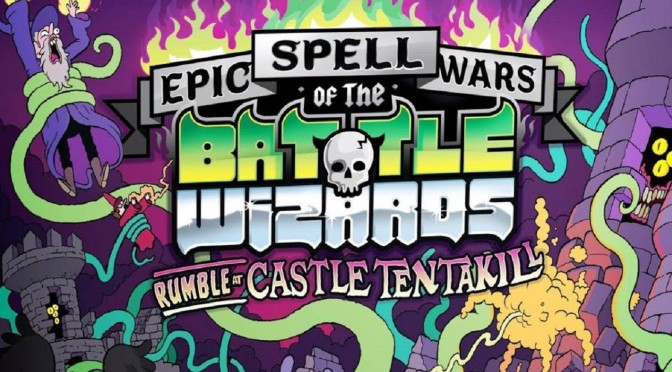 This week in the vault, we are going to reach for something a little…different. In fact, you could say it is EFFIN’ EPIC. OH YEAHHHHHH! There has been recurring jokes in many campaigns that I’ve been in, certain over the top scenes deserve to be airbrushed on the side of whatever transport we have that counts as a van. (Once game had a space Winnebago, so let’s not judge). So when I say that Epic Spell Wars of the Battle Wizards is over the top, I mean that playing 80s metal over your play would be a thematic decision which would work. This is a game that found the top, and magically kicked its ass so hard it saw the curvature of the Earth. As the game phrases itself in its own rulebook, it is about “Ball Rocking Magic” and it crams every bit of over the top, Rule of Cool justification to cover its play.

It seems that in a land once like our own, there came along a being known as “Uncle Andy”, who graced it with magic. People immediately responded in the only way that seemed appropriate: blowing each other up in high-stakes sorcery battles.It’s a pretty thin plot, but it is gloriously lampshaded. How did magic happen? Why did it happen? No one knows, and no one cares, because they are too busy wreaking vast swaths of destruction in magic tournaments in what is now the Kingdom of Carnage, with wizards reincarnating at the start of each round to continue the neverending battle for dominance.

The ruleset is relatively straightforward, but provides an impressive amount of variation. Players select a character (a cosmetic choice), start at 20 health, and are tasked with reducing their opponent’s  health to zero. They draw eight cards from the main deck to make a hand, and use those cards to generate a spell that they want to cast each round. Each card has the parts to make a spell in it, with each part in one of three categories: The Source (possessive noun), Quality (adjective) and Delivery (common noun), which are structured so that the combinations are supposed to provide an epic sounding spell. Players are allowed to make a spell that contains a maximum of one of each of these categories, playing them face down in order to start the round. While it might seem like a no-brainer to play as many cards at once, there is a balance for shorter spells: there is no established player order before each round begins. Initiative is decided first by who has the fewest number of cards set down, resolving ties with who has the highest initiative score on their Delivery (otherwise set at zero). Playing more cards creates more potent effects, but slows down when you go in your turn. Of course, some spell effects are more potent the later that you play them (“Damage everyone who went before you” for example) so there is plenty of tweaking and planning that goes into a round.

To further add wrinkles, there are also “glyphs” displayed at the bottom of the cards. These are there to represent different types of magic, and accordingly tend to have different themes in their effects. Primal magic offers self-healing, but also draining health from other players, while elemental magic is primarily damage dealing. Dark magic has some of the most potent effects, but can damage the user as well. The more of the same type you have, the more dice are rolled when determining the Power of the spell, or what level of effectiveness it hits. The more power cards of the same glyph, the more dice you roll. The higher your roll is, the more powerful effect is generated.  Certain cards are, to an extent, meant to be paired with each other. The card artwork displays the beginning, middle and end of a complete spell in corresponding Source, Quality and Delivery, so that when placed together they form out a contiguous scene. Of course, there are so many cards in play in the core alone, never mind the expansions, that the odds of having a complete set are slim to none. Combined with stacking effects from different spell pieces, there is no “right” combination of spells, only what works for you that round.

Adding to this wide array of combinations are Wild Magic and Treasures. Treasures are kept in a separate deck, and are put into play as part of spell effects, staying with one of the players. They remain in effect throughout the entire round and modify the effects of the player’s spells or grant some other ability (for example,  counting as having an extra glyph for a spell type, adding more to a dice roll, healing for every glyph of a certain type you play, etc.). Then there is wild magic. Wild magic is the wild card that is placed into one of the spell slots, increasing its length. When it’s your turn, you draw from the deck until you find a card that would complete that slot of the spell, making it impossible to completely predict what will happen.

Overall, in spite of all of these rules, the game was surprisingly quick to pick up. By the end of one round, we had pretty much figured out the gameplay, and we were determined to top each other. For the group of five, getting knocked out early wasn’t an issue because of another unique mechanic: the Dead Wizard deck. Every time a player is knocked out, they are dealt one of these cards, which provides an advantage for the next round (more health, more items, etc.), so players were incentivized to keep it close, and those of us who found ourselves knocked out could console ourselves that we had an edge in the next round.

Finally, there is the overall aesthetic: it’s just plain fun. The premise makes no sense, and the cards are garishly decorated with over the top violence. I am reminded of the art from Superjail! and Heavy Metal (the cult classic). It’s a relatively strategy light game that can be picked up quickly, and almost never goes the same way twice. It also has a number of expansions, which I won’t go over today, mostly because I only briefly played one. If you feel like you want more moving parts to keep things interesting, adding more is pretty seamless. My one caveat is that the game is definitely a mature rating (keeping with the art styles I mentioned). The game warns about it, but the over the top graphics are probably too much for little kids, so bring this one out sparingly interested parents.

Epic Spell Wars of the Battle Wizards: Duel at Mt. Skullzfyre first came out in 2012. It and its expansions, ESWotBW II: Rumble at Castle Tentakill and ESWotBW III: Melee at Murdershroom Marsh are available from Crpytozoic Entertainment.