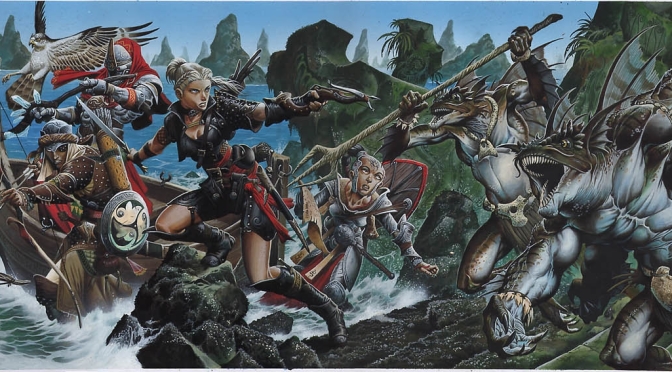 After retreating from the crypt, the adventurers went towards the oceanside of the abandoned city and made use of the tools they were able to find. Elliot used an old forge and anvil to rework the broken suits of Enchanted Armor that were fought in the crypt. Out of six suits came one firbolg-sized suit of plate mail, and breastplates for a couple of the others. The treasure from the crypt was buried in the basement, and the adventurers were able to rest under a roof, above ground, and in beds. Before the night fell, Elliot, who had been vexed by the adventurers going in and out of fairy doors, wrote a note in Sylvan and gave it to Hrive. Neither of them knew who or what was causing their compatriots to travel back and forth between the current world and the Feywild, but the two fey in the party were the ones who had the best chance of finding out. Hrive did have the dream of the forest and the thick bushes, but this time the laughing woman gave him a cryptic invitation that sounded like it may have been meant for Elliot. Hrive awoke in a cold sweat, but appeared to have lost little time compared to some of the disappearances of his compatriots.

Jethro had an easier night’s sleep, but awoke to something strange. His trusty walking stick was gone, replaced by a halberd. The weapon, made of dull grey metal and black leather, looked like nothing he had ever seen before. He poked it. He kicked it. After nothing seemed to happen, he took a deep breath and grabbed it.

“Jethro, I know I told you never to open my chest…” Jethro heard the voice of his grandpappy, loud and clear, right in the middle of his head! After expressing familial disappointment, Grandpappy William explained how he came to make a pact with a strange spirit, who promised that in death he would become the spiritual weapon that could defend his family. Jethro being his only descendant left alive was not exactly William’s plan, but now the two of them had to make the best of it. Through all his disappointment, William couldn’t hide his surprise and even slight admiration that Jethro had gained the power and experience necessary to awaken him. The rest of the party was surprised, too…surprised that Jethro was standing in his room, arguing with himself.

That morning, the group decided they were going to go investigate the masts they had seen near the horizon when they landed on the beach. The strange structure was still visible from Glebhavern’s abandoned harbor, and looked like it would be less than a day’s travel. The group commandeered a tender from one of the abandoned ships, and Elliot and Ander rowed the small boat towards the structure. Jethro was even able to catch some fish as they went. As they approached the structure, two similarly sized boats rowed out to intercept them. At the head of one was a dwarf with a braided beard and a salty accent. Elliot explained that they had been in a wreck and were in need of assistance. Seeing little they could steal, and having not seen any new people in years, the pirates agreed to parley if the party surrendered their weapons. After a moment’s hesitation they agreed, with Jethro finding out that he could dematerialize grandpappy, and Elliot knowing that if worse came to worse he could just throw pirates out of windows. The rest of the weapons were turned over to a bursar, with the pirates watching with skepticism and amusement at their sheer quantity.

The masts the party saw ended up being a pirate shanty town, built out of platforms lashed to a shipwreck. In addition to the ramshackle buildings, half a dozen ships were moored to the platforms, kept up but in disuse. After turning over their weapons the adventurers were sent to the largest building, where they met with another dwarf, this one more softly spoken and articulate. As could be imagined, the ‘pirates’ at this settlement hadn’t performed much piracy in the recent years, with trade having ground to a halt. They were familiar with the smugglers who carried the party and then disappeared, having seen them both transport and rob their charges in equal measure. The pirate’s guess was that Alstern and Renard had stolen the supplies off the beach and made their way south to the Third City, which apparently once was a Kavish city but had been razed in the war. The Third City was the new settlement that had been built on top of the ruins. There was also mention of a djinn near the road to the Third City…it was a mention made in passing but several adventurers had their ears perk up.

After determining that this group could not afford to buy one of their ships off of them, the pirates offered a discount in exchange for a task: Sail north with them and fight off some Sahuagin to get at the intact mast of an old shipwreck, and they’d repair the wreck that the party left on the beach for a modest fee. The smaller amount was affordable, but would be two thirds of the treasure taken out of the crypt, which Elliot wasn’t happy to give up. He offered an interesting counteroffer: they’d get the mast and bring them their wreck, but instead of paying for repairs, the party would give the pirates the ship and lease it back from them, being guaranteed five journeys with a full crew at no additional cost. The pirate captain agreed to these terms, with one new condition: the pirates had the option to set the destination of the last journey, which the captain wanted to be an expedition to the Eastern Continent. With the possibility of such an expedition far in the future, the party agreed. After shaking on it, the adventurers followed the pirates to the boat which would take them to the shipwreck where they were to retrieve the mast.

The island was barely above water, and the party had to track through muddy swamp land before reaching the ship. It had run aground, the area turning from a relatively deep salt marsh into shallows very quickly, and thanks to the mud it was impossible to see from on deck. No matter, the mast was intact, though ripped out of the ship’s hull and listing forward. There were four sahuagin around the ship, and fighting began at range, With Hrive and Jethro firing arrows and spells as the others advanced. Two sahuagin advanced forward, while two retreated into the ship. After felling the first two, the party saw why the sahuagin fell back: they had a friend. A massive shark was circling under the wreck, and it rammed the ship as the adventurers tried to move towards the mast. Soon enough, everyone but Hugh was in the water. Ander had been wounded slightly, but that was enough to attract the shark, who breached the water and attacked. Several adventurers got weapons stuck in the beast and Elliot tried to ride it…Ander and Elliot, involuntarily and voluntarily, got dragged into the water, with Ander getting attacked again. The two of them made it to the surface, and when the shark breached again, there was another volley of attacks. Before long, the shark and the other sahuagin had been dispatched, and the party had a large wooden mast as their only prize. Or was it…Elliot tried to Detect Magic around the ship, and saw a faint signature sitting on the seafloor out beyond the ridge. He dove, and was able to grab a small jewelry box. Inside were eight cut stones and a vial of deep red liquid, the source of the magical signature. No one in the party was bold (or foolish) enough to taste the liquid, but identifying it was put somewhere on the priority list, another task that made the party miss their absent wizard…

Let’s talk briefly about the concept of “finding the plot”. While this is a GMing strategy I discussed in an earlier article on campaign structures, this session gives a great illustration of how one seeds a plot in a sandbox, hopefully to “find” later. There were several things going on here, which all represent potential conflicts and hooks for the party to pursue. The fey hook had been dangled for some time, and at the beginning of the session Elliot’s player decided to grab it. Jethro’s player was given a direct hook in the form of his grandpappy, which both serves as an avenue to pursue Jethro’s backstory as well as a fun twist on the Hexblade patron. And the encounter with the pirates gave several interesting threads, including the first mention of the Third City, as well as the now active ship lease with a juicy termination clause.

The key to finding the plot is that your players will find it, as opposed to you writing it. Sandboxes lend themselves to this, because there are so many things going on. This session was a  microcosm of the broader sandbox, because it involved liberally sprinkling everywhere the players went and everyone they talked to with potential plot hooks. The important thing here is to write enough behind the hook to make it interesting, but not enough that you’ll be sad when it isn’t investigated. In a shorter game, you’ll come to a point where the players have clearly pointed out the plotline they’re interested in, and then it’s off to the races. In a longer game, you can also keep the other plotlines in the back of your head, possibly checking in on them so you can return to them later after your first arc has been exhausted. Either way, you’re going to have one plot thread that will take up most of your time as it’s going on, and your other hooks will, for the most part, sit there. While it’s important to keep the world dynamic and think about what’s going on in places your players aren’t, a sandbox isn’t generally driven by world-shattering events of great import. The threads your players don’t pick up may evolve or change, but there isn’t likely to be a clock that will run out on them. That said, a cataclysm can be an interesting way to get your players’ attention; just make sure said cataclysm isn’t destroying your players’ favorite places or NPCs without giving them a chance to respond first. There’s a fine line between interesting consequences of inaction and frustrating denial of agency.

While your world should be full of things to do and conflicts to resolve, your players will latch one to one or two above others. This doesn’t diminish the importance of giving them many choices. Your sandbox is a garden, and you’re growing plot threads. The first thing you need to do is throw down some seeds.