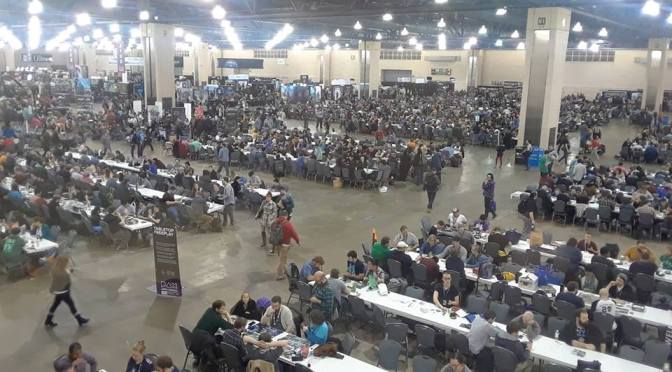 Welcome readers! Please forgive this slightly late and exhaustion fueled entry. Upon occasion, I burrow away from the gaming table and out into the world at large, and when I heard that PAX Unplugged would be returning to Philadelphia, I couldn’t help but ensure that I made the trip.

Unplugged is a spinoff of the PAX Expo line, passing up the better known video game focus of the standard con in favor of tabletop and board gaming . As such, it took a different feel from a lot of the others in the namesake (or so I’ve been told, I can only report on this one.)

To get it out of the way, Unplugged is still a pretty young con. From what I saw, and from reports from a lot of people I know who attended, there were definitely some logistical miscues. Setting up in the Philadelphia Convention Center, security was put into place to inspect doorways, and were subsequently divided into entrances and exits. Bluntly, from all reports, security simply wasn’t ready for the volume that awaited them upon opening day and Saturday morning. There were a few miscues with the timing of tickets and available on Sunday. But that seems to only scratch the surface.

If there is one thing I need to highlight overall as a negative, it’s one that comes with a decided silver lining: for virtually everything, demand was exceeded and then some. I am willing to delay some judgement because of what that implies, that there is so much interest, so much buzz going on with the event that the con runners have ample evidence that they can push further and dream bigger in coming years.

There is serious reason to be proud, and plenty of room to see there is plenty of room to go in the future. Demand to enter events was extreme. I had heard that spots were snapped up fast so on Sunday (the last day of the con); I arrived to wait in line to register for a tabletop session half an hour before registration opened. By the time I got through the line, the game was filled. There was no pre-registration. If you, for some reason, could not be at the door at opening, you were likely not going to get into a specific game.

That said, there was plenty to do for people of all involvement levels of the gaming community. Tabletop and board gaming often share a common space, but bring in very different crowds, so it seems that a lot of effort was spent to ensure that there was something for everyone. One acquaintance in particular who joined me in a group on Saturday isn’t a gamer at all, and actually seemed to be skeptical right before attending, but wound up really enjoying wandering around the expo floor, and even got into some of the panels. (Specifically, one about unconventional gaming, using things like knitting, and baked goods)

Speaking of panels, there was a really nice array of different topics. They ranged from fun and lighthearted (“Release the Minions: Introducing RPGs to Youths”), technical (“Collaborative Homebrew 101: Cure for the Common Murderhobo”) to some fairly heavy stuff (“Not Having Racism in Your Campaign, Settings, or Table”, “Historical & Visual Transgender Representation in RPGs” and “Fake Romance/Real Feels: Let’s Safely GM Sex & Relationships”). There were real efforts to make sure that inclusivity was part of the event, something I appreciate.

Without taking too much of a bow, I want to say something about the con goers: from everything I saw, they were awesome. With all the crazy lines and hype, I barely heard anything other than a small grumble. People were remarkably well behaved, and they made great use of the space. The third floor (lesser used) became a huge spot for people to whip out their purchases and break right into games, and there was loads of enthusiasm.

As I began with, there are still some rough parts to the con that can be worked on and tweaked, but I would highly recommend people to make the visit in upcoming years.

“Wait, what were you doing while you were there?”, people may ask! Well, I am a bit wiped out from the con, but stay tuned for reports from the expo floor, interviews with game representatives and designers, and a review of two of the indie games that I picked up! Stick around folks!