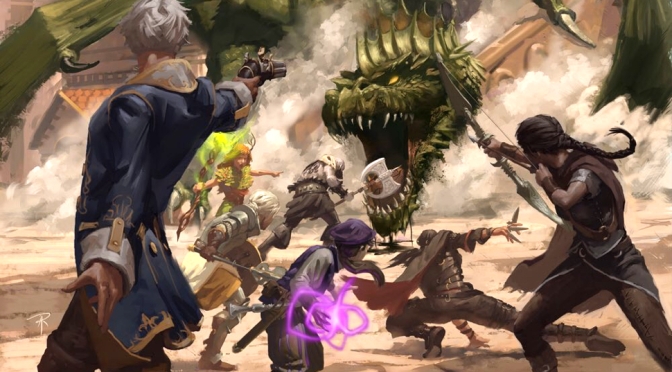 A member of a Tal’Dorei-wide criminal empire, actually a monk hunting knowledge and fighting those who would use it for evil. A child of two worlds with magic in his blood and runes on his skin, taking back control of his life and mastering the arcane. A barbarian warrior of the Terrah Ashari with the strength of stone, a juggernaut instructed to join a new generation of adventurers. A former cultist of the Whispered One, now a cleric of the Matron of Ravens, using the power of blood to strike down her former allies. Vox Machina may have retired, but the world of Critical Role still needs heroes. Let’s see what some of them might look like with a Meet the Party for 5th Edition D&D made using the Tal’Dorei Campaign Setting from Green Ronin Publishing!

The Tal’Dorei Campaign Setting landed on my desk a good while back, and I enjoyed reading through it, but I never did anything with it here on CHG before now. I was a fair bit past the ‘scoop’ period for reviewing it, and the review could be summed up pretty easily anywway: great for fans of Critical Role who want to adventure in Tal’Dorei, offers a solid setting with a lot of adventure hook ideas for those who aren’t yet fans but stumble upon it, and has mechanical material for both to use.

Still, I’m getting back into the swing of things with (5e) D&D between Aaron’s campaign and some of my own plans, so that’s prompted digging back through the library, and sure enough the TCS was waiting for me to give it another look, and I thought . . . why not? What follows features all of the class builds in the book (Blood Domain Cleric, Path of the Juggernaut Barbarian, Runechild Sorcerer, and Way of the Cobalt Soul Monk), as well as the four backgrounds (Clasp Member, Lyceum Student, Ashari, and Recovered Cultist).

So, who is adventuring on Tal’Dorei these days?

‘Muse’ Shava, as a monk of the Cobalt Soul, is an embodiment of the strength of knowledge. Her Mystical Erudition grants her Advantage on Arcana, History, and Religion checks by spending a Ki point (while also letting her learn additional languages). Extract Aspects allows her to spend a Ki point to force the victim of two or more of her attacks make a Consitution check, and if they fail Shava can learn things like their Armor Class and Damage Vulnerabilities. If she hits a creature with two or more of her attacks she can use Extort Truth by spending two Ki points, forcing a Charisma saving throw; failure means her target cannot speak a deliberate lie for 1 minute. The magic granted by her fell bloodline fits right in with her mission, and while it’s not without risk the connections she’s built with The Clasp can offer great opportunities.

Cadman Lathalas is well on his way to mastering the arcane power singing in his blood and the runes that appear on his skin. As a Runechild he has a number of Essence Runes on his body, equal to his levels in Sorcerer. For every sorcery point spent to enhance a spell (or via direct point expenditure using a bonus action, or as an action if there are no points available), one of those runes becomes charged. Cadman can use charged runes to fuel Glyphs of Aegis, negating some incoming damage or even passing the Glyphs to other for them to use. Sigilic Augmentation allows him to expend a charged rune as a bonus action to grant Advantage on Strength, Dexterity, or Constitution checks for a round. Manifest Inscriptions sees Cadman expending a charged rune to reveal hidden magical marks, runes, wards, or glyphs. His status as a student of the Lyceum allows him access to school (and allied) facilities.

Berg is a mighty warrior of the Ashari of Terrah, using the strength of the mountain to become a Juggernaut. His Thunderous Blows force struck enemies to make Strength saving throws, getting hurled around on a failure with Berg hot on their heels. The Stance of the Mountain means that Berg cannot be knocked prone while raging unless he’s completely knocked unconscious. His Demolishing Might grants all of his melee attacks the siege property, doing double damage to objects and structures and extra damage to construct type creatures. His Earth Walk negates difficult terrain on stone and earth, Merge With Stone lets him pass without trace, and his Elemental Harmony gives him a limited, earth-based version of prestidigitation.

Petronilla Marchand‘s powers are . . . somewhat gruesome, but she uses them to fight for good and the Matron of Ravens (not always the same thing, necessarily speaking). Her Bloodletting Focus deals additional necrotic damage to enemies when she harms them with a 1st level spell or higher. Blood Puppet can make a target just that; if a Large or smaller creature fails a Constitution check Petronilla forces them to move and attack a target of her choice. Notably, dead or unconscious creatures automatically fail their saving throw. Crimson Bond lets Petronilla use the blood of a creature to form a connection with them, learning their location and general state and potentially even sensing through their eyes and ears. While her history with a cult of the Whispered One is troubling, it has its benefits; Wicked Awareness grants her Advantage when making checks to hunt down cult or dark followings.

Aside from the Tal’Dorei Campaign Setting, I used the Player’s Handbook, Mordenkainen’s Tome of Foes for the Dispater Tiefling, and the Elemental Evil Player’s Companion for the Earth Genasi. Credit where it’s due, I also used Xanathar’s Guide to Everything’s random tables to generate most of the names.

I stuck to Level 6 for this one because every class here gets something at that level, showing off just enough of what every build has to offer without revealing everything or getting too scattered as to when they receive new features.

‘Muse’ Shava got her nickname among the Clasp for being able to ‘inspire’ people to talk with her fists. Unbeknownst to the Clasp, however, is that they don’t have her true allegiance. As a Cobalt Soul monk Shava has always sought to gain knowledge, and the Clasp have proven a useful tool in that quest. As a result Shava has had an above-average degree of success when it comes to ferreting out those who would use rare knowledge for evil ends. Of course, she walks a razor-edge line between her duties to the Knowing Mistress and the Clasp; ‘normal’ adventuring is almost a vacation from living dual lives.

Cadman Lathalas has always stood out, and that hasn’t always been to his benefit. The son of diplomats from Emon and Syngorn, he often found himself ostracized and looked down upon by half of his extended family. When he began to manifest magic it was a welcome thing, but when the first rune appeared he was back to standing out. His father sponsored his entrance into the Lyceum, however, and Cadman has worked hard to seize control of his life and stand out in a good way. Attempts to take advantage of his runechild nature were brushed aside by his own competence and his growing contacts within the academy. Still, after a particularly stubborn attempt to get him to ‘volunteer’ for an experiment, he’s decided it might be better to ‘study abroad’ for a little while.

Berg spent most of his early life as a warrior defending Terrah (and by extension no small part of Tal’Dorei around it) from the earth elementals and such that come out of the rift to the Elemental Plane of Earth. Like most Earth Ashari he would have been comfortable enough doing that forever, but the Voice of the Tempest had other ideas. Berg was asked to prove his strength in the wider world, stepping up as part of a new generation of adventurers to replace the ones that had retired, grown old, or perished. It’s . . . been a difficult time, but Berg is like the stone in his bones, and is determined to overcome these challenges and return home some day.

Petronilla Marchand won’t speak of what drove her to worship the Whispered One, or much of her time among the cultists of that newly-ascended and thankfully-sealed deity. What she will speak of is that the treachery of her fellows was eventually revealed to her, and how only pledging herself to the Matron of Ravens was enough to save her and see her escape to freedom successfully. She has since re-devoted her life to the Matron and to hunting down her former fellows wherever they may hide, and as a result has gained tentative allegiance with the Claret Orders dedicated to hunting everything that might threaten the sanctity of life.

How They Came Together

It’s reasonable to assume that Shava and Petronilla met one another while each was following their own leads to hunt down a splinter cult of the Whispered One, Shava as an agent of the Cobalt Soul and the Knowing Mistress and Petronilla as one of the Claret Orders and the Matron of Ravens.

Cadman probably came into their lives next, traveling to a monastery of the Cobalt Soul as part of his ‘study abroad’ plan and meeting the two while they were there resting. When the pair left to track down a fresh lead, Cadman tagged along, offering his arcane strength in return for strength in numbers and opportunity.

Finally, the trio likely met Berg in the middle of things; take your pick who was in trouble, but whether it was Berg coming across the waylaid trio or they finding Berg standing alone, their bond is one forged in battle. Berg was asked to become an adventurer instead of just a warrior, and all the tribe’s stories say a proper adventurer needs a party.

So what adventures do await potential heroes in a world after the defeat of the Chroma Conclave and the Whispered One? Many eyes have turned to the continent of Wildemount and the travels of the Mighty Nein, but Tal’Dorei still has its fair share of problems and dangers. In a land whose most famous heroes have hung it up for good, will Shava, Cadman, Berg, and Petronilla write a legend of their own, or be forgotten? As always, that’s for you (and your dice) to find out.

One thought on “Meet the Party: Heroes of Tal’Dorei”