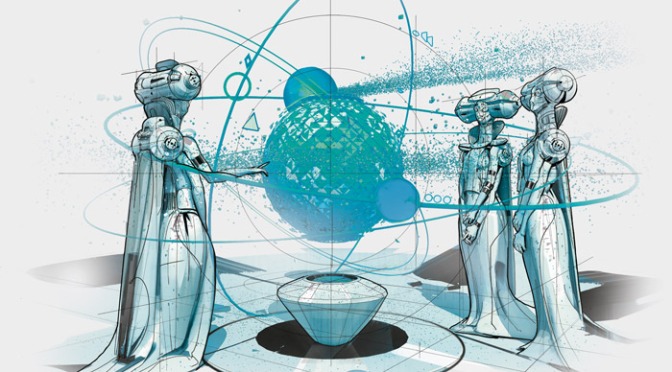 Every successful RPG must have a strong setting or a strong ruleset. When Fantasy Flight Games hit it out of the park with their trio of Star Wars RPGs, they clearly had a strong setting. As it turned out, though, the system was pretty solid too; the Narrative Dice System had been patched to tone down the excesses of WFRP 3e, resulting in a game that was a good balance between robust and quick, and added a good amount of narrative flair and interesting in-game decisions. It was so good that people were able to overlook the expensive proprietary dice. From Star Wars came Genesys, a generic RPG which truly begs the question of whether the Narrative Dice System can succeed on mechanics alone.

When it comes to generic systems, I prefer those which lean on the adaptability of their mechanics rather than the breadth of their supporting materials. People don’t buy GURPS for the Vorkosigan Saga, no matter how good those books were. When it comes to Genesys, the exact same thing is true. Don’t get me wrong, both Realms of Terrinoth and Shadow of the Beanstalk are well-done supplements, but the settings they were derived from are both pretty generic. I’d be hard-pressed to name a single thing about either of those settings which make them more interesting than, say, the Forgotten Realms or Shadowrun. This is why I was greatly intrigued when the Genesys Expanded Player’s Guide was announced.

The Genesys Expanded Player’s Guide does conform to the tradition of the “Player’s Handbook 2.0” format, giving more options and rules expansions that bolt onto (and take the same form as) the options presented in the core book. There are three main sections here: New Settings, Expanded Rule Creation, and Expanded Alternate Rules. New Settings is primarily made up of a few new settings which are roughly the same length as the six in the core book. Expanded Rule Creation consists of two chapters for making more of your own stuff, namely adversaries and vehicles. Expanded Alternate Rules has a number of new play suggestions, ranging from tones which are just as thin as the ones in the core rulebook to a new rule expansion that’s been eagerly anticipated by just about every Star Wars player out there: the creation of your own Specialization Trees.

There are three new settings included in the Expanded Player’s Guide: Age of Myth, Monsterworld, and Post-Apocalypse. Each of these settings has the same quantity and type of materials as the settings in the core book, down to providing the same number of character options and adversaries, or at least very close to it. Age of Myth expands off of fantasy and provides options for playing powerful heroes of myth, going after equally mythic foes. Monsterworld is sadly not a setting based off of Monster Hunter or Pokemon, but is rather a pulp horror setting of mad scientists, their creations, and other beings that live in the shadows. Post-Apocalypse is exactly what it sounds like; this particular interpretation also happens to remind you that FFG holds the board game license for Fallout.

When Seamus and I looked at the settings in the core rulebook, they all felt a bit thin, like there wasn’t quite enough there for a game. These settings don’t feel that way to the same degree, mostly because there’s a core rulebook to fall back on. All three of these settings have enough overlap with the existing ones that the number of options available to you is much higher than when the core rulebook was new. Since Age of Myth ties in with fantasy elements, that one can also at least partially benefit from Realms of Terrinoth as well. It’s clear this hasn’t been lost on FFG; there are scavenging rules in the Post-Apocalyptic setting that would let pretty much all the modern day (and sci-fi if you want to play that way) items bolt onto that setting with little fuss.

Because I like tweaking things much better than just using what’s on the page, I found the second part of New Settings way more interesting. The section on Creating a Setting breaks down writing a setting into six steps. How these creation chapters were handled in the core rulebook involved a lot of advice and not too much in the way of concrete starting points and examples. Well, it looks like someone at FFG read my review, because that is no longer true at all and as a result I love this chapter. Creating a Setting takes you through a rough top-down world-building process, going from tropes to specific factions and high-profile NPCs, with the help of 12 tables, set up to allow you to roll randomly for any or all of them. While this process lacks detail compared to, say, GURPS, it makes up for it in character.

The Tropes table is my favorite, because it provides a list of concepts that GMs want their campaign to center on, independent of setting. Separating tropes from the other elements is key, because people may not otherwise think of running a robot-centric campaign in the iron age, or having their group of Knights Errant tromping across a tidally-locked desert world in the age of the Psychic Awakening. All of the tables possess the same sense of fun, and make you want to roll on them. The explanations and advice that come between the tables are also good, but in many ways this sort of high-level worldbuilding is a worked problem. FFG put in the work, and therefore the writing is good enough. It’s the options and organization that make the system shine.

The entirety of this chapter shows that Genesys is benefitting from more: more options, more structure. It should be no surprise, then, that the next section, on creation rules, is the most important part of this book.

No offense to the vehicle creation rules (or the other chapters, I suppose), but Adversary Creation is what makes this book a must-buy. First, the actual creation of an adversary is done mix-and-match with pre-generated options and arrays for all of: characteristics, defensive thresholds, skills, talents, other special abilities, and equipment. In addition to this is guidance on how *all* of these options mesh with the existing minion/rival/ nemesis structure. Then, after providing a literal NPC smorgasbord…FFG tied it all together with a challenge rating system. And get this: it’s a three-tiered system with separate ranks for combat, social, and general encounters. Between these tools and the content of the existing supplements, Genesys now rivals D&D in terms of the breadth and hackability of its bestiary, which is no mean feat. Pretty much any GM who wants to write monsters, create NPCs, or even just prep encounters will find a use for this. Maybe it’s because I’m an inveterate rules hacker, but my one complaint about this section is that it should have been in the core rulebook.

For all my enthusiasm I’m not going to entirely ignore the vehicle creation rules. It’s a good system, overall: you start by picking a vehicle’s silhouette, and then adding speed, handling, defenses, and cargo capacity to get at a final price. Straightforward, usable, and not nearly as exciting as adversary creation. The pre-made vehicles section is much longer than the one in the core rulebook, though, which I appreciate; there are also some additional optional rules that mostly pertain to scenarios in which a vehicle would have to be repaired (namely the scenario of crashing it).

The final section is more scattershot than the other two, but there’s some good stuff in here. The first section has to do with magic, and starts with a list of new magic talents for you to add to your fantasy games. The next bit is a bit more central and a bit more interesting, three new spells. Three may not sound like much, but remember that Genesys uses a verb-based magic system that only had eight spells to begin with. One of the new spells, ‘Predict’, can stand in for the entire field of divination, so even with now ten core spells instead of seven (Utility is kind of a tacked-on catchall) each verb maintains its degree of power.

The next section is one many people have been waiting for: Specialization Trees. Specialization trees were the core way characters in the FFG Star Wars games earned talents. For higher-powered games, Talent trees provided a way to both restrict what talents characters could take as well as make high-powered talents quite a bit cheaper. The guidance in this chapter for creating your own specialization trees splits the difference nicely between generic advice and hard numbers. When looking at the procedure, though, it becomes clear why this method is a secondary one for Genesys: Specialization trees are significantly more work than the talent pyramid, and doing them well requires its own set of playtesting as well as writing. Still, especially with the Genesys Foundry up and running, players have been clamoring for exactly the sort of guidance that this section provides.

The last bits of the third section, much like the last bits of the core rulebook, are all right but kind of uneven. The “chapter” (two pages) on Social Encounters reads like errata; it’s not corrections per se but rather clarifications and explorations of corner cases. It’s fine, but there’s nothing really groundbreaking here.

The tones are no worse, but no better either, than the tones in the core rulebook. As there are two tones and only one has either no or dumb mechanical expansions (I’m sorry, FFG, “internal monologue” is a dumb rule. They took it out of Blade Runner for a reason), therefore their hit rate is higher. Noir has suggestions and the above-mentioned “internal monologue”, while the Heist tone has a pretty neat little Heat mechanic that could easily be adapted to many games where time pressure would be appropriate. Overall, though, tones are still light, and read more like suggestions than mechanical overlays. If anything, I get why they’re still stuffed away in the back.

There’s a lot to like about this book. More options, many more mechanical backstops for writing your own stuff, and a whole new balancing mechanic that should make running the game easier. This supplement has helped confirm that FFG is aware that Genesys is an ecosystem, both by making the materials in this non-setting book very central as well as bringing back a well-loved option from Star Wars. My hope is that this level of awareness and modularity continues in the next round of Genesys supplements, which will more likely than not be more setting guides. While Fantasy was an easy lift and Cyberpunk was at least perceived to be, a Tannhauser or Sovereigns of Steam setting guide will need a lot more work to avoid redundancy. While I’m sure any setting book FFG puts out will have its fans, the Expanded Player’s Guide has helped cement in my mind that the legacy of Genesys will be built on its mechanics. I recommend this book heartily, and am looking forward to the next mechanics-centric Genesys supplement.