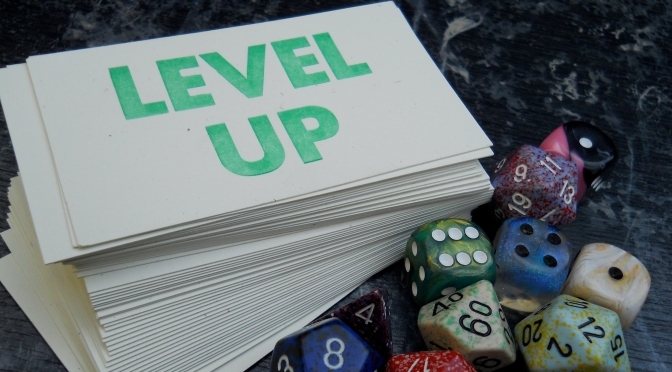 How much of a meme is RPG advancement? It’s so much of a meme that it’s right there in my pseudonym. Levels, experience points, and the various versions of same filtered through the ‘TSR don’t sue me’ lens have been considered inseparable from the notion of a tabletop RPG pretty much since D&D sold actual copies. The notion of awarding experience points (or XP) has become so ingrained in the concept of an RPG that tack-on advancement mechanics are *the* thing added to video games to give them “RPG elements”. The reason why this is the borrowed element is fairly clear: experience points have always been and continue to be an elegant mechanic to turn a game into a Skinner Box, to get us to keep pushing the lever in modern video games with perhaps repetitive mechanics. So why do they continue to be a mainstay of tabletop RPGs, where there should be more going on than just watching numbers go up? Well, read on.

The experience points and levels version of advancement is one of those D&D truisms, like the nine-box alignment grid, six attributes, or the d20 itself. And like the other truisms, the amount of work we’ve done to step back and figure out the reasoning for continuing to use it other than ‘Gary said so’ is, at least, variable. That’s not to say there aren’t at least a hundred people with strong and well-formed opinions about advancement mechanics (they’re all on Twitter). What I would say, though, is that especially in the traditional games realm, a lot of games put in advancement mechanics without giving enough thought as to why they’re there or what they could do.

First Question: Do You Need Advancement Mechanics in an RPG?

With that out of the way, let’s ask the corollary question: why do designers put advancement mechanics in their games (besides the fact that there’s an expectation to do so)? Broadly, advancement mechanics exist either to drive player behavior or to drive character change. These purposes sit on opposite sides of whatever advancement mechanic is built. The elements of advancement rules which drive player behavior are the defined activities which, when performed, cause the player to be rewarded in the form of an advancement currency. The elements of advancement rules which drive character change are the in-game items which can be purchased with said currency, be they attribute increases, new skills, new abilities, new items, meta-currency, and any number of different items which change the play experience in a manner that’s desirable to the player.

And plenty of games do without the expectation that characters change in a mechanically material way. GURPS, a traditional and mechanically intensive game, doesn’t require the use of advancement mechanics. There’s the indication that a GM could reward their players with character points and use the rules from character creation to spend them, but as one would expect this is offered as an option, not a hard-and-fast rule. Plenty of one-shot games have no advancement mechanics, many narrative games do without them as well. ‘Leveling up’ may be intrinsic to Dungeons and Dragons, but it’s not intrinsic to role-playing games in general.

So just leaving out advancement mechanics is an option. But if we want to include them in a game (whether this be a game you’re designing or a game you’re running in an existing system), we should be asking why.

As I discussed in my PbtA 201 article, changing the conditions under which your players gain rewards will necessarily change their in-game behavior. Whether or not you think this is a good thing is a matter of opinion, but the impact of these design changes are patently obvious once you get to compare and contrast a few of them in action like you can playing different PbtA games. Another classic example of this is the old standby of early D&D, “XP for gold”. While the particulars vary depending on the edition (or retroclone), the basic idea is that characters would earn experience points for each piece of gold they pilfered from a dungeon and either “returned to a safe place” or, in some versions, spent. This made the entire game about pilfering treasure from dungeons; as the game was already almost entirely about pilfering from dungeons in the first place, this was not much of a restriction. When the core advancement mechanic changed from “XP for gold” to “kill monsters for XP”, the dynamic of the game changed. Now, violence was the only way characters could gain experience, and so the violent approach became the preferred approach. Before, any method to getting the gold out of the dungeon could work, and in fact non-violence was often an ideal strategy when violence had such significant consequences. Designers working on modern (i.e. Third Edition and onward) D&D have been aware of this issue, but when you contrast the occasional editorial on Three Pillar XP that doesn’t even appear in a book against the significant mathematical effort of the Challenge Rating system, you kind of come to the conclusion that the violence-centric advancement system is here to stay.

There is of course the option to make no judgment or inducement on player behavior with an advancement system, but still use one. This is, broadly, how a milestone-based advancement system works. When a GM gives out experience points after every session or after story events, the only behaviors they induce are showing up to the game and having your character do something. If the rewards are flat for the entire party, they may not even induce that. These systems aren’t a bad thing; they tend to give more leeway to individual groups to determine how they want their games and plotlines to move forward. But, when there are very good behavior-driving advancement systems out there (Artha in Burning Wheel comes to mind), I can’t help but think that simply ignoring this use of an advancement system isn’t always the best outcome.

If you know anyone who simply couldn’t imagine playing an RPG without an advancement system, it’s likely because advancement mechanics are by far the most popular way to emulate a character changing over time. Whether your game of choice has you going up a level or buying a new skill or “talent”, typically the advancement mechanics are either the most significant or the only way for a character to mechanically change over the course of a longer game. Having your heroes grow stronger and more powerful as the story continues works great for all sorts of heroic tropes, but there are other narratives out there and there really should be other ways to do this. The balance here becomes that if you’re going to try to write a mechanic that shows how your character is changing in ways other than their abilities, you need to make sure it’s additive to the character development that’s happening naturally in the story.

One of the biggest obstacles to re-framing an arc of character change is that there are other RPG design truisms that reinforce it. The biggest one, of course, is the notion of Level 1. Level 1 doesn’t imply a level-based system, rather it means that RPGs by default start characters out as weak and somewhat ineffectual. Like other truisms there’s no ‘why’ to this other than the fact that that’s how D&D did it at the beginning and then many other games followed suit. Now there can be something to a good “zero to hero” arc, but the issue is not whether or not such an arc is good (that’s subjective), but whether or not we have other options.

I’m of the personal belief that the RPG world should have significantly more games built around responding and changing to character actions. Video games are good at this on a superficial level; they understand the power of showing players that they changed the world around them. It’s mostly smoke and mirrors on the digital side, though; the decision points are pre-determined and the plot is a railroad, even if it’s a railroad where you get to get off at different stations. While tabletop games don’t typically fall into this trap (not on the design side at least), they also don’t provide anything interesting or mechanical for it either. A game having a paragraph that says “remember that when the PCs return to locations, their past actions have consequences!” is doing fundamentally nothing (and believing it’s doing something, which is the problem). I mean, it’s good GMing advice, but there’s a lot of missed opportunities around designing mechanics to provide emergent consequences to player character actions. Even board games, with the recent interest in Legacy games, have integrated an interest in mechanizing consequences of player choices into their designs. In some ways I’d like to see the RPG equivalent of a Legacy game: A long-form campaign experience that tells a much more interesting story about a character than “and then they got stronger/faster/smarter”. Narrative RPG designers have been doing it, and clearly board game designers have been doing it. What’s that area in between look like?

‘Levelling Up’ has become ingrained in broader expectations for what an RPG looks like, something which will only get more true as the market dominance of D&D continues. In addition to that, advancement mechanics work as intended, giving players that dopamine hit when they do what the game pushes them to do and get to make their characters better as a result. That said, if designers believe that there’s something special and desirable about the long-form RPG campaign (as I do), then stepping away from advancement as your overarching driver can only make things more interesting. Advancement and the upward power curve are a trope of RPGs, on the design side they may even be an expectation, but there’s nothing that makes them a requirement.

8 thoughts on “Level One Wonk: Advancement”