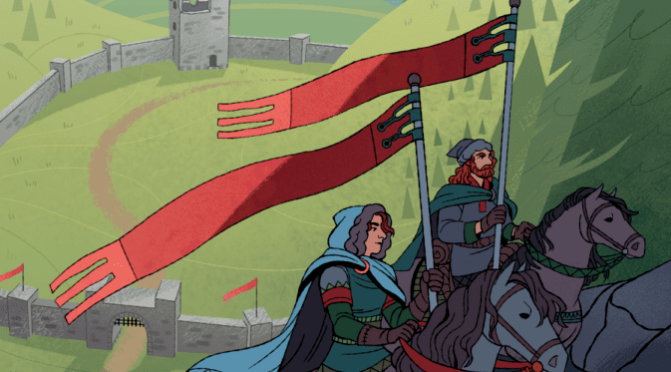 I miss the old days. Don’t misunderstand what I am saying. Things are better now, without a doubt. The Empire took everything from us that made us who we are. It ripped apart our most sacred monuments, it dismantled every part of our government that we prided ourselves in. It took our children away to be “reeducated”, they even took the spirit of the land itself away from us. But while they were directly in front of our faces, we hated them with unfettered ferocity. Before, in our old lives, you would have had a scion of a rival family that  you would have been obligated to feud with for tradition’s sake. Now, they were in the work camp right next to you, swinging the same pickaxe. At the end of the day you both were literally too tired to care. The Arbiter saw that and knew what he could do with it. We were able to unite, to ignore generations of contempt for each other because our contempt for the Empire was so much greater. After bitter struggle we have at least some measure of ourselves back, but we bear scars: monuments defiled, power structures crippled, refugees who barely remember their old lives pouring back. Even the magic of the land itself has begun to forget us. But as those things are far from normal, our old rivalries have begun anew as every old faction, necessary in our struggle, now wants their voice heard. While we’re Free from the Yoke, we risk forgetting a grave truth: the Empire is still out there. It has not forgotten.

Most fantasy and sci-fi series have a tendency to end at a moment of great victory: the Death Star blows up, the Ring is cast into Mordor, the Fire Lord is defeated. It’s a perfect moment of triumph and the credits roll. The events of what comes afterward tend to be somewhat limited or glossed over. It is a lot harder to make a compelling story about setting up a new stable form of government, establishing new penal codes, and reversing the bureaucratic inertia left by the old regime. That isn’t to say that it can’t be done. Timothy Zahn and Michael Stackpole did an interesting job in Star Wars Legends (with Claudia Gray and Alexander Freed doing the same these days – Ed.) of making the Empire a challenging threat after the death of the Emperor, and the web novel A Practical Guide to Evil thoroughly explores the problems of actually administering a province given even a measure of independence. Among the many lessons we have collectively seen reinforced over the past few months, it is that leading a movement and establishing a new status quo are two very different things and have vastly different challenges.

Free from the Yoke (brought to us by Minerva McJanda, Fyodor Kasatkin, and UFO Press) stands out because it put the rebuilding front and center, explicitly stated by the developer as a game where players can explore a setting without carrying weapon in hand, instead facing issues with non-violent antagonism and coalition building. The setting is in the aftermath of liberation (of sorts) from the Empire, a nameless force that had conquered their home. Players collectively flesh out details about the world, bringing in touchstones they want to see: what to do with collaborators, reparations, setting up new forms of government, fractured coalitions, and genocide are all options to bring in, and it gives a wide breadth in which the players can choose themes.

However, there are always central core issues: while the Empire might not be in the immediate picture anymore, there are still marks from their time. Some factions had been driven out. Sacred sites have been disturbed. Your people’s magic is literally powered by connection from the land, and in some cases it no longer recognizes the people who are now there. In some cases you are still part of the Empire, but have simply been granted a higher degree of autonomy . . . under the Empire’s discretion. Second, the current control of your nation is under the leadership of an Arbiter, who is managed by the GM. The Arbiter is the one who managed to forge the coalition that led to the current freedom, but again players have freedom to determine what is actually going on: are they an authoritarian leading with their sole vision? Are they beholden to an oligarchy of Great Houses and persons of influence? Have they swept into power on a surge of populism? Are they the leader of a group of warriors, a magical order, or a careful politician? Players are also free to determine the nature of Arbiter’s role in the story: are they full-throated supporters? Is the Arbiter a mysterious chessmaster keeping everyone in check? Are they a new tyrant, who is only more palatable than the alternative? These are all part of the struggle that the players will have to face.

Set in a Powered by the Apocalypse mechanics base, Free from the Yoke is set up for a player facing interaction. While the game has the hallmarks of the classic system, I feel that there are definite evolutionary links to the Forged in the Dark mechanics). What players first flesh out in their playbooks is, in fact, not their characters: it is the Great Houses, similar to how Blades in the Dark has the players manage the gang. The Great Houses are powerful factions that had to be brought together in order for the revolution to be achieved: naval traders, cavalry hordes, merchants, craftsmen, academics, priests. All have resources and assets that they either can offer or that they need, and they all have to interact to get what they want. The players can decide House agendas: do they want payback against rivals? Do they want to assert dominance and become the new leader? From there, players create champions for those houses, giving them agency to act while the Arbiter enacts their plans for the nation, which they can help or oppose. The season changes when an Arbiter goal is brought to fruition or fails, moving onto the next.

While you can simply play with one character, Free from the Yoke has implications for long running play, changing champions as seasons pass and the ages change. The game has a starting point in the late middle ages, but I find that the rules are flexible enough to modify the setting to the Renaissance era, Age of Exploration, and up through the Enlightenment era. I think it could be interesting to see cavalry hordes changing to accommodate those advancements in technology. Arbiters can come and go, perhaps being replaced by a player faction and setting off a new age of politicking.

This is mostly a ten thousand foot view of the game. There are more detailed interactions and moves as factions jostle for power and address needs. You can get into detailed accounts of champions, and I really do enjoy the amount of nitty-gritty players can get into if they like. From a reviewer standpoint, however, I feel like I really can’t get into each and not get lost on the trees when describing the forest. There is depth for people who love that detail, but what really charms me is the overwhelming space for a long running story. In my mind, the ability to take on a part of worldbuilding in an interesting way and drive it to shape the story of a nation offers a level of agency that isn’t often seen in games, and for that reason, if nothing else, I think people should give Free from the Yoke a look.

One thought on “The Independents: Free From the Yoke”