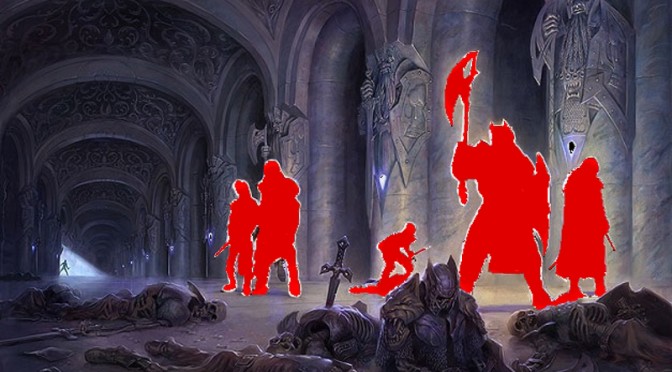 A time traveler with no sense of hearing, and no sense of fear! A genius engineer who finally has a chance to try out the fun (read: dangerous) designs! A smalltime boxer from the Big Apple turned heavy hitter and watchful protector! A ‘retired’ spy who refuses to stay out of the game, or the beds of the enemy! A former enemy, raised from youth to be a killer, who has struck out on their own! A scrappy freelance photographer, determined to come along for the ride no matter what! Together they are ACE ADVENTURE AND THE FLYING ROYAL FLUSH! Each Meet the Party article gives you an entire group of ready-to-play adventurers (maybe even some heroes) for your gaming needs for a variety of systems and settings. This time we’re going to showcase an entire party of characters for the Fate Accelerated Edition game, with help from a very special guest. So hop in your fighter plane and get ready for giant monsters, mad scientists, and diabolical villains as we see what the Flying Royal Flush can do!

Fate Accelerated Edition, or FAE, is something I’ve wanted to do for Meet the Party for a little while now. It’s a fun system, it’s fast-paced, it’s rules-light and easy to learn, and you can do almost anything with it! Of course, the challenge is that in order to create a party you roughly need a setting for it, and I puzzled over which sort of setting to feature first for some time. Eventually, however, I remembered that I’d helped a friend brainstorm a setting and some characters for FAE. I debated whether or not to revisit them, but sure enough when I asked on Twitter what people might like to see for an FAE Meet the Party I was quickly contacted and sent some characters!

Ace Adventure and the Flying Royal Flush are a band of daredevil pilots and adventurers in . . . well, how about I let the writer take charge? Brian Liberge was kind enough to describe the setting, characters, and adventures of Ace Adventure and the Flying Royal Flush for us, so why not get it straight from the source? So, what kind of world are we dealing with, and what inspired it?

“Ace Adventure is a Decopunk, alternate history taking place post WWI. It combines Pulp! styled heroes, particularly flying aces, with modern punk aesthetics giving our heroes a truly optimistic outlook to tackle any issue. That’s not to say it will be easy; London has suffered nuclear fallout, creating some truly epic giant monsters and inspiring a wave of evil geniuses and corrupt criminals.

I’ve said in the past that Ace Adventure is like looking at a mash up of Sky Captain and the World of Tomorrow, The Adventures of Buckaroo Banzai Across the 8th Dimension and The Venture Brothers. Big action, intertwined relationships, and failure is always on the table.”

Brian, myself, and a few other miscreants first sat down to put Ace Adventure together maybe 2-3 years ago, with Brian as the creative director (Jacques du Monde was my personal favorite, you’ll probably see why). Since then Brian has put Ace and the Flush through a few iterations and has taken them on a few tours across the country; if you’ve gone to conventions like GenCon and PAX East there’s at least a chance you’ve actually met our heroes already, particularly if you swung by Games on Demand (who you really should check out if you can, it’s a great way to find new games). Presented here are the latest versions of Ace Adventure and the Flying Royal Flush for FAE, which premiered at PAX East 2016. Adventurers, to your planes!

Background: Time travelling “revolutionary”, Ace became a war hero after saving an allied base during a raid. Ace’s broken down time machine was discovered in Britain, and its detonation is what really caused the nuclear bombing of London. When exactly Ace became deaf is another story, not that it’s slowed them down.

Trouble: I Can’t Hear You and I Don’t Care

Direct Action-Punk: Be the Solution Now

– Because I am Fearless I get +2 to Flashily Overcome Obstacleswhen death is the obvious outcome.

– Because I Lead by Action I get +2 to Quickly Attack when I have not taken Stress or Consequences yet this scene.

– Because I am a Famous Hero once per session I can find help in a complete stranger.

Background: British engineer relegated to work on junk planes during the war. Whitney finally got the chance to try brand new, generally dangerous, ideas when paired with Ace. Technically controls the Flush’s funds as an experimental contractor at MIT.

– Because I am a Brilliant Engineer I get +2 to Cleverly Create an Advantage with mechanical elements.

– Because I never shy from hard work I get +2 to Forcefully Defendwhen toughing out a melee attack.

– Because MR. X has my back once per session I can call in a favor.

Background: A smalltime boxer from NY, McQueen joined up as soon as America entered the war. McQueen started as a heavy weapons expert but got volunteered to fly. McQueen hasn’t stopped watching Ace’s back since. Half-sibling of Carrie Wilde.

– Because I Watch Out I get +2 to Quickly Defend when protecting someone from sudden danger.

– Because I have Direct Experience I get +2 to Forcefully Overcome Obstacles when using a big gun.

– Because I’m Always Saving Ace once per session I can turn a tie or failure into a success when creating an advantage.

Background: A longtime intelligence agent Jacques is a master of disguise, a pilot, a triple agent and most importantly a pillow talk mastermind. Jacques may be retired but Jacques is not out of the game.

Trouble: Sleeps With the Enemy

– Because I’m Always Improvising I get +2 to Cleverly Create an Advantage using mundane items.

– Because I’ve Been Through Worse I get +2 to Sneakily Overcome an Obstacle when outnumbered.

– Because I’ve Made Many Contacts once per session I can make a Flashback Action out of turn order.

Background: Raised as an agent of R.O.N.I.N. from a young age, Ten was supposed to be the embodiment of strategic assassination. Initially facing Ace as an enemy, Ten soon learned R.O.N.I.N. was as domineering as any government and left.

Trouble: Who Am I Really?

– Because I’m Dangerously Efficient I get +2 to Carefully Attackwhen I’ve taken time to plan my strike.

– Because I Don’t Trust Authority I get +2 to Quickly Overcome Obstacles when defying orders.

– Because I’m Very Intimidating once per session I force a villain to reroll a success or outstanding success.

Genderpunk: No Labels, No Restrictions

– Because I have an Eye for Details I get +2 to Sneakily Create Advantages from things no one noticed before.

– Because I Have to Get the Shot I get +2 to Quickly Overcome an Obstacle based on social restrictions.

– Because I Feel Entitled once per session I can insert myself into a scene in a location I should not be in.

Our plucky adventurers have all been given their three free Stunts, while remaining at Refresh 3 and thus keeping the 3 Fate Points they can use to invoke their Aspects (or avoid being compelled by the same). However, you might notice that each character has two blank spots where some more Aspects could go; these slots have been left empty so that players can create their own Aspects on the fly. Whether playing in a one-shot and coming up with something that can help them in their immediate future or playing in a longer game and developing the characters together over time, this gives players a decent amount of creative control. Ace and the Flush are all pretty much gender neutral, and have plenty of spots in their backgrounds that can be filled in. With this and the two open Aspects, any group of players can make Ace Adventure and the Flying Royal Flush their own!

So, a little bit can be inferred from their backgrounds and their Aspects, but I asked Brian how our heroes might (remember, every player group might be different) interact with one another.

“Ace, King, McQueen and Jacques all fought side by side in WWI. They can be competitive, sometimes dismissive, but ultimately they’re family. 10 and Wilde have connections but to an extent they’re outsiders. They don’t have that same shared history and I’ve seen their relationships develop distinctly at each table. Often Ace, King, McQueen and/or Jacques will become a bit of mentor to 10, Wilde and even Ace!”

So, what kind of adventures might the Flying Royal Flush embark on at your table?

“The Flying Royal Flush have fought the mafia pretending to be aliens, saved the Winter Olympics, helped Houdini battle ghosts, and saved Boston from a Giant Tentacled Tuna. If it’s big and weird, they’ll take the job.”

If you’re looking for a stripped down version of the Fate RPG which maintains the mechanical strength of narrative Aspects and exciting Stunts while simplifying the skills, then Fate Accelerated Edition is going to be just your thing. And if want high flying adventure in a world with big bad guys and bigger stakes, then take Ace Adventure and the Flying Royal Flush into the skies! Will they fly to glory or go down in flames? Well, as always, that’s for you (and your dice) to determine!

Brian Liberge is the creative director behind Beer Star Games, and is otherwise a freelance designer of no small amount of material. Brian can be found on Twitter @BrianLiberge.