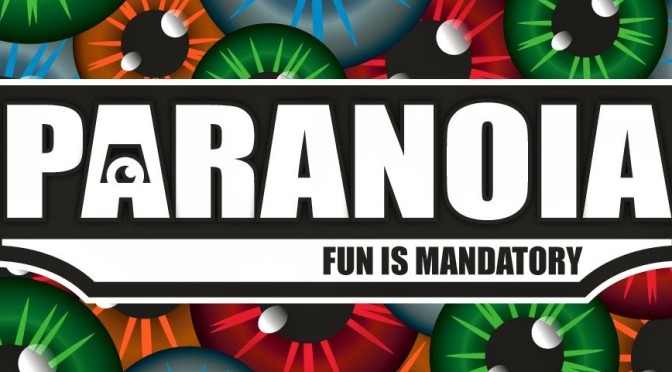 Welcome to System Split! Today, our very own Level One Wonk will examine two very similar systems to see what sets them apart. When the genre, complexity, and even rules system are exactly the same, what makes a game unique? Today’s System Split requires Clearance: RED, as we take a look at a couple editions of Paranoia! What has changed in over a decade since Mongoose started publishing this infamous piece of 80s RPG lore?

In examining our past System Splits, we’ve taken a look at how very similar mechanics can create different outcomes, as well as how different mechanics can be layered onto a single core game to create different approaches to the same basic concept. There is another System Split out there, a game which ends up using two completely different sets of mechanics to achieve the same essential game experience. There are times when this works well (D&D’s update to Third Edition), and times when this doesn’t work as well as hoped (D&D’s update to Fourth Edition). Still, many games end up going through significant overhauls over their lifetimes. One of these games is Paranoia.

Paranoia was originally developed by West End Games in the 1980s, but the editions I’ll be discussing were all developed and released by Mongoose Publishing. Paranoia sees the players take the role of “Troubleshooters” in the sprawling underground city of Alpha Complex, a dystopian surveillance state controlled and operated by the omniscient Computer. The Troubleshooters would take on whatever tasks the Computer saw fit to assign them in order to keep Alpha Complex running and clear of traitors in whatever form they would arise.

Warning, Citizen! The subsequent paragraphs are ULTRAVIOLET clearance! Any citizen who accidentally reads past this point must either acquire one (1) dose of ScrubbyBrain(™) or immediately report to the nearest cloning tank for self-termination.

Ultimately, the problem with Alpha Complex is that the Computer is starting to get a bit buggy, and its military origins don’t do well without an external enemy to target. Anyone, especially troubleshooters, can find themselves running afoul of the Computer and being accused of treason if their behavior doesn’t fit within the Computer’s strict parameters. To add insult to injury, the two most common sources of treason, mutant powers and secret society membership, are automatically foisted upon any troubleshooter unfortunate enough to have a human player.

The basics of Paranoia have always been the same. Survive as a troubleshooter, navigating insane bureaucracy and managing to hide your treason while at the same time furthering your goals, usually at the expense of others. This basic structure has amused players for years, up to and including the release of the latest edition within the last year. Compared to the earlier Mongoose releases, however, the rules of the newest edition are completely different. The d20 has been swapped out for dice pools, and the equipment charts and flowcharts have been replaced with decks of cards. The game in many ways has the same flavor, but a couple key things feel quite different.

In case the jokey ultraviolet warning above wasn’t enough, discussions of in-depth mechanics of the older Mongoose editions could spoil the game, so read ahead with caution if you want to play the 2005 edition of Paranoia or Paranoia 25th anniversary edition (from 2009). The basic mechanics for the game involved rolling a d20 and comparing it to the rating in an appropriate skill, but this was not intended to produce predictable results. The difficulty numbers could be affected by the tension level in the room (highest in bathrooms), perversity points spent by other players, and in some cases the character’s Access stat which was rolled in secret by the GM and never revealed. The intent of these mechanics was quite deliberate; it ensured that no one could know for certain if they would be able to succeed at something and dramatically heightened the levels of (*ahem*) paranoia. It also strongly encouraged meta-game behavior of note-passing, GM bribery, and other shenanigans as there was a strong external implication that the GM was just declaring whatever result they wanted.

The newest edition steps back from hiding the mechanics adjudication, and in the process of doing so makes the rules somewhat easier. Resolution is now a d6 dice pool, so you know how many successes you get and how many you need to, well, succeed. There’s a Computer Die, which attracts the attention of Friend Computer every time it comes up a 6. Team roles (called “Mandatory Bonus Duties”) and Equipment are now dealt out as cards instead of being up to the GM’s whim (one of the most stylish elements of the old game was a double-sided questionnaire that the GM would grade to determine mandatory bonus duties). Mutant powers and secret societies are still random, but using cards instead of hidden charts cuts down on character creation time.

The big change to this is that the GM, no longer given multiple smoke screens for resolution and no longer the purveyor of the precious perversity points, has less of an ability to just screw over players for arbitrary or meta-game reasons. Fortunately for the overall flavor, though, this has been replaced with giving players reason and ability to screw over each other for arbitrary or meta-game reasons. Character creation involves giving the person to your left negative skill ranks . . . and then later forcing you to let them re-arrange all your stats. Initiative is done “BS” style, where you put down a card face-down with an “action” number on it, but are encouraged to lie about what number is on your card. And finally, when the Computer is called in, they no longer are so likely to simply extend a laser from the ceiling and roast a troubleshooter. Instead they give “treason stars” (the concept of which should be familiar to any Grand Theft Auto player), which give cover to other players to shoot them later.

On the surface, the mechanics changes seem pretty significant, but when lining them up in a row the redesign collapses to one key gameplay difference; instead of building a “player versus GM” environment, the new edition of Paranoia builds a much stronger “player versus player” environment. It’s an interesting choice, and I’m left wondering if it’s an update in the game’s satire made to reflect current RPG attitudes (like how swapping out communists for terrorists is supposed to reflect current political attitudes). Earlier editions of Paranoia exulted in violating expectations for RPG play: it was oppositional instead of team-based, the GM was corruptible, but adversarial play was encouraged nonetheless, and character death was made meaningless by your six-pack of clones. This edition seems to move away (at least partially) from meta-satire and meta-commentary. Instead of placing the GM in the shoes of Friend Computer, the GM is now merely a GM again, though given the controls to a world that is unpredictable and unforgiving in the way that many literary dystopias are (consider how little tension would exist in 1984 if Winston or Julia had actually been apprehended when they started committing thoughtcrimes as opposed to later on). Paranoia is still satirical, but it no longer seems designed from the ground up to violate role-playing gameplay expectations in the way some of the earlier editions were.

The conflict I have about the new edition of Paranoia is one of my own recollections of Paranoia versus the capabilities of the new game. The new edition of Paranoia is much, much better suited to running the “straight” style of game than the older ones. I can see how “straight” was intended to work with the older editions; while there are a number of hidden rules and systems to the game like Access scores and Tension levels, they all work in a discernible way. The players were supposed to find the unspoken patterns in the setting, and use them to their advantage. The problem with this is that actually trying to run a game in that way would be incredibly frustrating. What’s worse, running a game in that way would demand teamwork, the exact sort of teamwork the system aims to undermine. The new game allows you to run adventures and have a story without having the meta-mechanics impede progress at every turn. There’s still a lot of room to go off the rails, but with a degree of implied consistency in how the world works, it’s easier for both the GM and the players to engage it.

The meta-mechanics, though, the exact ones I say impede system engagement and make campaign progress frustrating, also made one-shot play of Paranoia nothing short of amazing. The fluidity of the GM’s role as well as the lack of mechanics knowledge made the table vibe of the old Paranoia games perfect. Dice were rolled, bargains were struck, and people died (often). When my group played the new edition we still got into it just as much, it is the same setting after all. Even so, there wasn’t as much note-passing, no bureaucratic questionnaires, no perversity point slugfests that sometimes started up to a week before the game happened. The game was slick, and it was fun, but it was missing a lot of the style.

Even with my nostalgia for the earlier Mongoose Paranoia, I don’t have a clear favorite. The new edition is a better game, period. Most of the things I recall wistfully were removed because they either slowed down the game or made it incredibly difficult to play. Paranoia now is easier to run as a campaign than ever before. But Paranoia the experience, Paranoia the meta-commentary, and Paranoia the shaggy dog story in RPG form all are best in the older editions, both earlier Mongoose editions as well as the West End Games editions that came before. So if you want a one-shot that will scramble your players’ brains and make them laugh, pick up any of the older editions used. If you actually want to run a real RPG campaign in Alpha Complex, buy the newest edition.