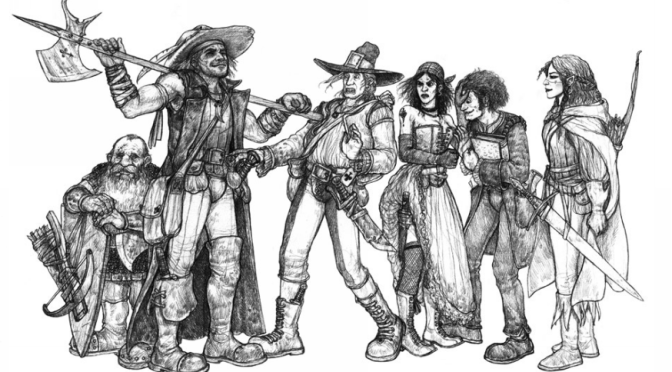 A hunter of vermin who’s eyeing much larger prey for her flail to be used on. An old squire without her knight, looking for some vengeance and maybe some glory. A bounty hunter chasing down the biggest score of her life. A coachwoman just trying to make her way along the roads with the strangest group of passengers she’s ever moved. Meet the Party is adding a new system to its collection, but this time the dice are the ones making the choices. That’s right, we’ve got randomly generated characters hoping to survive in the dark, cruel world of Zweihander. It looks like they just might, too: these are some tough ladies!

Zweihander is something new for Meet the Party, yes, but it also brings an entirely new method of character creation to the series: completely random character generation. As Aaron mentioned when he looked at the game, it’s a ‘retro-clone’, a game specifically built in an old style, and the dice gods have well and truly taken the reins. That’s going to appeal to some people, and outright turn away others; players who get enjoyment from tweaking their characters or finding interesting option combinations might feel a little empty-handed since they don’t get to do much during character creation; it’s only by spending Reward Points, gaining advances, and choosing your second and third Professions that you really get to guide your character’s growth.

On the other hand, though, rolling to see what you’re going to play can be a lot of fun (although it does take time, part of why I decided to offer a pre-rolled party). You can get some pretty zany combinations, and while this quartet aren’t the weirdest I’ve seen, they’ve definitely got some potential.

Rebekka Verminbane might ‘just’ be a Rat Catcher, but that doesn’t mean she isn’t skilled enough to participate in some adventures. The diminutive gnome is surprisingly good in a fight, but it’s the other skills she’s picked up along the way that really make the difference. She’s got the best Initiative in the group, and she’s the sneakiest and wiliest of the bunch thanks to Guile, Stealth, Instinct, and Streetwise. Gutterspeak’s ability to let her communicate with animals could be all sorts of help, particularly when looking for prey – or trying to avoid becoming prey herself.

Season of Birth: Autumn Dooming: “The Abyss also gazes back.”

Adelheid von Eisenberg is a talented fighter, the best armed and armored woman in the group, with Fencer’s Panache giving her some interesting tricks like disarming her opponents. Despite her combative career she’s one of the more intelligent travelers, with Education and knowledge of Warfare (that, thanks to Mettle and Steel, she can use in place of Resolve). She’s also a decent talker thanks to her skill with Charm, and is the only member of the band to carry a firearm.

Verena brings wilderness skills and ranged combat skill to the group, capable of finding her way beyond the walls of civilization and even thriving there. Take ’em Down lets her use options like tripping using ranged attacks, and For a Few Shillings More lets her first ranged attack in a fight automatically hit with extra damage.  She’s got the sharpest eyes, can get a few good words in with Bargain, and she’s well-equipped to survive where others won’t.

Bärbel of the Roads

Season of Birth: Spring Dooming: “Pride comes before a fall.”

Bärbel of the Roads lives a life, well, on the roads and that shows. Drive, Ride, Handle Animal, and Navigation make her as skilled as she needs to be to be a competent coachman, while Simple Ranged helps her defend her passengers and cargo. It’s the Talents that really make Bärbel shine, though. Azimuth means she can never get lost so long as she can see the stars. Mounted Defense lets her put her Drive/Ride to use in her Defense, while Saddleborn boosts her attacks while on a mount or vehicle. When she finally gets into town she can use Rumor to find out the latest gossip, such as what work is available and what horrible people/monsters have been stalking the highways.

There are only two things above not determined by a d100 or some number of d10s. The first is, technically, the first part of Race. The default setting of Zweihander, uh, defaults to the concept that humans are the overwhelming majority if not entirety of the population, and that every player character will be a human. Personally I find that a little dull, so I chose to roll on the non-human chart for three of the four characters.

The second thing is which Advances and Iconic Trappings the characters would get. The Advances are from a pretty limited list, and you’d end up taking all of them anyways over the course of play, so there’s not too much variation there. Rebekka got her Small but Vicious Dog, Adelheid got a flintlock pistol, Verena got the manacles, and Bärbel got the stagecoach and horses to serve in her profession as a Coachman.

The one thing I could’ve chosen to roll for but didn’t were the Drawbacks. They give characters some sort of physical or mental ailment or a troubled backstory in exchange for another Fate Point, but I liked the way the characters turned out and didn’t want to give any of them Weak Lungs.

Rebekka Verminbane has been going from township to township hunting rats and other wee beasties for a good long while now. It’s worth good coin, and while rat catchers typically have a stigma attached to them Rebekka doesn’t care: even if gnomes weren’t stereotypically disliked by most she certainly would be. She’s blunt to a fault and her words tend to hit about as hard as her threshing flail. She’s also eyeing something akin to retirement, or as close as she can manage, and that’ll take a bit more than a few more rats.

Adelheid von Eisenberg has been a squire for a long time. Too long, really, and part of her had long since given up ever being knighted herself by her master. He certainly won’t be knighting her now, rotting in a shallow grave. It’s been tough surviving on her own for the first time in decades, but amidst all the big shake-ups in her life she’s actually doing alright. She’s still got her weapons and her health, so she can make a good enough living. There is the matter of honor, however; at this point she almost feels too old for it, but her master’s killer is still out there, and that demands justice.

Verena can’t entirely remember what it was like to live among her own Kindred, having been exiled years ago for some crime or another. Doesn’t really matter, anyways. She’s got a life and a career, such as it is, and she’s decided to take pride in doing it to the best of her ability. She’s brought in some pretty nasty criminals (she likes the irony) and brought down a few monsters over the years, enough to make a bit of a name for herself. She’d still like to make it into the annals, though: the thought of the next exile reading about her tickles her fancy.

Bärbel of the Roads isn’t what most people expect when they hire a stagecoach, but they certainly get their coin worth out of the trip. You’d probably not be surprised by how many highwaymen decide not to attack a stagecoach when there’s an 8′ tall ogre holding the horses’ reins. Bärbel’s family have been in the business a while, and are oddly militant about the whole thing. She hasn’t been on her own for very long, but she’s adapted a steady-as-she-goes mentality to things . . . at least she did until she picked up these three.

Rebekka doesn’t care much for people in general, but these other three ladies are . . . alright, she supposes. Despite being some poncy squire Adelheid has been around the wheel enough times to be able to put up with some truly nasty things, which Rebekka begrudgingly respects. Verena is ‘the obnoxious one’, an irony Rebekka studiously ignores, but she’s also a fellow hunter of sorts and they both understand what it means to get messy. Bärbel’s a kid, never mind that she towers over the gnome, but the stagecoach beats walking.

Adelheid doesn’t much care for Rebekka, carrying a typical dislike of those who work with vermin, the usual distaste for gnomes, and a personal frustration with the woman’s mannerisms. She can at least be expected to be honest, though, which is admirable in its own (often crude) way. Verena would have gotten labeled as an honorless mercenary and probable criminal, but things are slightly different without Adelheid’s knight around. The elf’s a good shot to have covering you. Bärbel’s not like most ogres that Adelheid has met; the only time she’s even threatened to eat anyone is when they leave a mess in the back of the coach. She’s certainly nicer than Adelheid ever expected an ogre to be.

Verena looks at Rebekka and sees a more gnomish version of the small but vicious dog that follows the rat catcher everywhere. Useful, funny from time to time, and valuable in her own way, but you wouldn’t let her on the nice furniture. Adelheid’s situation would be sad if she hadn’t proven so adaptable; the human will be alright, and in the meantime makes a decent friend in a fight. The idea of an ogre coachman is hilarious, but why not? She honestly wishes Bärbel all the best, as if anybody here deserves a happy ending, it may as well be her.

Bärbel likes Rebekka, despite the gnome’s best efforts. She’s a scrappy little thing that doesn’t take any guff from anybody, and Bärbel admires that. Adelheid seemed pretty spooked by her at first, but the human seems to have settled down since the Meat Pie Incident and has since been a great help defending the coach along the road. Verena is about as aloof as Bärbel expected an elf to be, and the habit of perching on top of the coach is a little annoying, but she’s surprisingly friendly to the young ogre. For a trio of passengers who don’t really pay and bring trouble more often than not, Bärbel’s companions at least make the boring legs of the journey more interesting.

When I picture this adventuring party I see a stagecoach barreling down a dirt road, probably up on two wheels as they make a turn, Bärbel hunched over the reins while Rebekka and Adelheid cling to the sides with Verena perched on top, fending off attackers or screaming in pursuit of their quarry.

What sort of adventures will they find on the road? Once they’ve found adventures can Rebekka, Adelheid, Verena, and Bärbel survive them? What kind of crazy Zweihander characters might you end up creating yourself? That’s for you (and your dice) to determine!

Like what Meet the Party has to offer? Want to see ready-to-play characters for a system and/or setting of your choice? Let us know @HungryHalfling, at cannibalhalflinggaming@gmail.com, or here in the comments! And remember, Patreon supporters get first dibs!

4 thoughts on “Meet the Party: Zweihander”