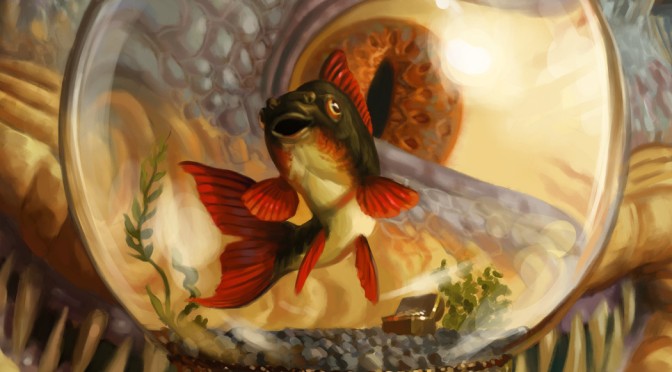 After much hype and hullabaloo, Wizards of the Coast has released Xanathar’s Guide to Everything, the first rules supplement for the Fifth Edition of Dungeons and Dragons. While there is nothing revolutionary within this volume, it offers some great new options for both mechanical and story aspects of D&D. I’d say it’s nice to have for players but more recommended for GMs due to the expanded proficiency and downtime rules, trap creation and encounter expansions, and the solidly integrated rivals system.

It’s difficult to treat this book as a cohesive product, as in many ways it really isn’t. Xanathar’s Guide takes the “Player’s Handbook 2” approach in that it offers a breadth of new options in a catalog style, rather than drilling down into a single race, class, or rules concept like many earlier edition supplements did. Compared to the other major mechanical supplement for Fifth Edition, Volo’s Guide to Monsters, Xanathar’s Guide has little overarching structure other than putting all of the new material into player and DM sections. Given the range of content (some of it revised from Unearthed Arcana, some of it reprinted from earlier setting and adventure supplements, some of it new), it makes sense to use the catalog style, but I fear that from a line editor’s perspective, it makes it difficult to provide continuity for any further rules supplements that would occur.

The players’ section consists of two main sections, a section for new class options and a section that provides a lifepath system for use in creating character backstories. The class options are good overall, though few jumped out at me. One of the exceptions was the rogue; Inquisitive and Mastermind are interesting in that they depart much further from the combat focus of most D&D characters. I think these are both well done, and they have hooks into the non-combat rules, both new and old, that are more interesting than just bonuses to skill checks. I look forward to seeing either of these in play. The lifepath system is very well done, though to say it’s a nod to Cyberpunk 2020 is a severe understatement. The system, exactly like 2020’s, has an origin, personal motivations, and life events section. Imitation is the highest form of flattery, though, and while the structure was used it was rewritten to be D&D relevant. One of my favorite touches was the background-specific and class-specific motivation tables, which allow players to get a unique bit of flavor while still retaining the relevance of their build choices in their backstory. The supplemental tables, while a minor addition, are all fantastically useful, and help NPC generation, especially in a sandbox game. They also could be used by someone who doesn’t know what they want to play, or even for one-shots if the DM really wanted to add a bit of random flair.

The DM’s section starts with some rules clarifications, then goes right into the expanded sections on traps, encounters, tool proficiencies, and downtime. Traps, tool proficiencies, and downtime were all relatively flat in the main books, and they greatly benefit from the expansion here. Traps now include complex traps, which are akin to legendary monsters and have multiple parts and multiple avenues to disarm them. The expanded tool proficiencies provide a lot more detail on how to use tools, allowing for a greater range of actions on the part of PC tool users. The random encounter rules make running a sandbox or old-school game a lot easier, providing a range of encounters categorized by level tier which strike a good balance between the contrivance of balancing every encounter and the potential terror of using an encounter table that ranges from CR ⅛ to CR 20 with little warning.

The downtime rules give a range of options that makes it easier and more interesting to have the party stay in one place for a while, whether that’s to take the winter off or wait for the crafting of a new item. The options make for interesting choices, but what really makes them pop are the complications and the interaction between those complications and the rules for Rivals. Rivals are NPCs that have a particular interest in the PCs, whether that is competition, suspicion, enmity, or something else entirely. Having rivals get involved in PCs’ downtime makes the otherwise quieter periods way more interesting, and provides an easy and fun way to throw some twists and intrigue into the mix. Combine the rival rules, downtime rules and lifepath together, and you can create a web of NPCs from the beginning that could make your characters’ lives very complicated.

Despite being billed as the first rules supplement for Fifth Edition D&D, Xanathar’s Guide shies away from providing anything in the way of substantive rules expansion. Unearthed Arcana has included new classes, the Mystic and the Artificer, as well as several rules variants, like Three-Pillar XP and Mass Combat. None of these were included in Xanathar’s Guide, which stayed very close to core Fifth Edition rules (Tools and Downtime are expansions of existing systems, and the class options all apply to the extant character classes). I understand the reasoning for this: First, classes take a lot more effort to balance. Mike Mearls released an update to this effect back in May, which was likely (speculation here) around when the contents of Xanathar’s Guide had been finalized. It’s also worth noting that d20 had severe class bloat which has since carried over into Pathfinder; this embarrassment of riches for character creation is a significant contributor to both the steeper learning curve of both of these d20 games and to their mechanical balance issues. Fifth Edition took steps to curtail that, such as doing away with prestige classes, but taking a conservative approach with supplements is a logical way to maintain a tight rules system and avoid future content bloat. As far as I know there is still plans to incorporate the Mystic and the Artificer into a future product, which provides some evidence that Xanathar’s Guide will not be the last rules supplement of its type during 5e’s print run.

Xanathar’s Guide is at its strongest when it’s pushing the Fifth Edition ruleset away from the core of dungeons, combat, and magic. The new class options and the new spells are all welcome (especially for someone who didn’t want to buy Princes of the Apocalypse just for a couple spells), but few of them are memorable. The flavor options, though, whether in the lifepath section or in one of the flavor tables included for each class, are great and immediately evocative. Even though they don’t represent rules, they help players to break out from trope-driven conceptions of their character and give the game a lot of flavor even without additional mechanics. The tools and downtime rules help fill out the time that adventurers don’t spend dungeon delving, and the rules for rivals ensure that even outside of the dungeon there’s excitement. I am very happy with Xanathar’s Guide and have already begun incorporating rules into my upcoming game, but in terms of what I want to see out of Fifth Edition this book has merely whet my appetite.

Xanathar’s Guide to Everything is available from Wizards of the Coast.

7 thoughts on “Xanathar’s Guide to Everything Review”