Every so often, I look at a game, and make an impulse purchase sight unseen. Sometimes it’s a follow up to a campaign that I have previously waxed eloquent about, others it is a supplement to a system that opens up rules for something I had envisioned, or has a high concept that is so unique that I can’t help but look. Other times, it is because it promises the ability to play in fictional works I love so much that I can’t help but churn out a cry of “Shut Up and Take My Money!” It’s the last of these that triggered an irresistible pull to Rookie Jet’s Over Arms.

The creators promised a system “designed to replicate media like JoJo’s Bizarre Adventure, Persona, FATE, Shaman King, and more”. These are all works that have a special place in my heart, some of which I was introduced to at the moment I started to look around and realize “wow, there’s a lot of other people interested in this geeky stuff. Maybe it’s not so lonely after all.”

Over Arms is a love letter to these series in that it’s a game to explore a partnership between the physical and metaphysical: something from worlds beyond has latched onto something tangible, and you the player get to explore that connection. This grants you an “Amina”, a summonable being, through which you gain abilities that allow you to traverse the hostile convergence…and deal with others like you.

Over Arms cuts straight into the action when it comes to character building, and I believe they happened upon a clever way to work simple mechanics that both cover a lot of options for actions players can take and reinforce the idea that your character and their Anima are two halves of one team. The character is the thing in the physical world the Anima has bonded with. I’m being intentionally vague because the rules do little to prohibit ideas. Do you want to be a cat bonded to an Anima that offers a disguise for you to blend into human society? Totally a viable concept. Do you want to be an ancient sword, one that survived decades of battle only to lie dormant in the modern age and be awakened to the echoes of the past? I can’t see a reason why you can’t. A group of sentient plankton? Jojo did it. So while I imagine that many characters are enthusiastic and/or angsty teens, there really is a blank slate of what is possible.

Both the character and their Anima have five characteristics and a choice of five dice, d4 through d12, and the player is able to choose to allocate one die type to each attribute. Both character and Amina have one feature that is entirely their own: Hit Points for the character, Anima Points for the Anima (effectively the number of uses before fatigue sets in). For all of the other characteristics, they are used in combined pools whenever the player wants his character to use his Anima to any end, bringing together both competencies in what is called a Junction. For the Character, these are Strength, Dexterity, Intelligence and Charisma and for the Anima they are Power, Speed, Defense, Range. Because each are separate, I believe that is gives the GM a way to offer some change ups depending on what the player says they want to do. Perhaps a player is used to using their Anima to blow things down by raw force, but might find themselves part of a backlash if they don’t strike carefully, requiring Intelligence + Power rather than Strength. A player that uses an emotional manipulation power normally might prefer to fast-talk their way around with Charisma + Speed, but might need to summon a mob to stand with them with Range instead.

The player is able to pick a specialization to an extent, choosing one of four archetypes for their Anima to occupy: The Fighter (high Power but low Range, attack and damage boosted by Strength), Magician (High range, low power, boosted by Intelligence), Guardian (High Defense but low speed) or Assassin (High speed, low defense, uses Dexterity to augment combat). They are standard axes, but I can see abundant room for customization, especially if someone was interested in running the classes from the Fate franchise (Saber, Lancer, Archer as Fighters with specific bonuses, Rider with more AP). 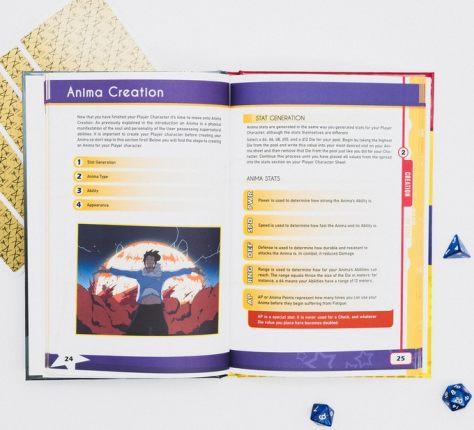 Players have free range to pick an ability for their Anima to have. Examples given include “store heat from their environment in a sword they use for attacking”, “produce steam as a cover”, and “swap the location of two inorganic surfaces that you’ve touched” requiring the use of an Anima point each time. Now, I want to point out something specific about these abilities, and it’s something that I enjoy seeing in fantasy works: once you decide on the Anima’s power, that focus does not change. Upgrades come not in gaining new powers, or making that more more potent, but instead by applying different uses of that same power. The flaming sword might also find that they are now able to generate ice because they are drawing heat into a single point, the steam maker is able to compress it into explosions, and swapping position could be used as a form of rapid transportation. I think it’s a nice touch, because it should lead players to look for creative uses of what they have and codify them as part of their upgrades.

With all of the attention spent on making characters, I was excited to see what kind of world the game had built…only to be disappointed. I want to go back to the quote at the top. As I have been looking over Over Arms with a critical eye, while I had been sucked in at the IPs that I thoroughly enjoy, I think that my exuberance had caused me to skim the words before it: “designed to replicate media”. This statement is the true crux of what Over Arms is more so than the works that it cites as inspiration. What I had forgotten in my excitement was that for all that I enjoyed the creative works being cited, they are extremely varied.

While all share the basic theme, one way or another, of making the metaphysical as a tangible tool, all have very different ways of going about it. Shaman King does this by binding spirits to objects, JoJo’s “Stands” and the eponymous “Persona” are manifestations of the self, and Fate is about summoning historical legends made flesh. Finding a way to link all of these disparate concepts into a single cohesive story would have been difficult for any writing team, but Over Arms…well, they simply don’t try. The background information for the story is about three pages long. After a fairly detailed and immersive look at how to build characters, the idea of a story to place them in was a tacked-on minor afterthought. As I have mulled it over, it seems that the word “replicate” was the end all be all goal of the creators. I can see, as I read through the rules, the tweaks I could make to the mechanics to create what I desire  if I wanted to run a campaign in any of those settings. The issue is more in that there is next to nothing to the background setting made for the game itself. Despite long explanations of how Anima works in the game mechanically, the absence of detail in any story behind it makes Over Arms incredibly difficult to write a plot for as a stand alone game.

Now, to be fair, this isn’t necessarily a dealbreaker. If you pick up Over Arms with a clear idea of the setting and lore that you want to play in, either pre-existing or an original one that the GM has a clear vision for, you should be just fine. However, I can see this being a true stumbling block to people who love the concept, but don’t have a concrete idea of what exactly they are playing.

I recommend the pickup if you are trying to replicate, say, Jojo’s Bizarre Adventure. or if the idea of building your own setting where players are engaged in a metauniverse appeals to you. There’s also some interesting stuff in the idea of Junctions, and I could see attempting to transplant it in to a Powered by the Apocalypse game if you want to add a layer onto a system that is a bit more fleshed out in the story department, or use the PbtA setting rules as a guideline to build the one you want.

If you want to take a look yourself there are free QuickStart Rules for you to check out, and you can finds resources (along with links to a subreddit and a Discord server) on the Rookie Jet site. The full game is available in PDF, softcover, and hardcover formats at DriveThruRPG.