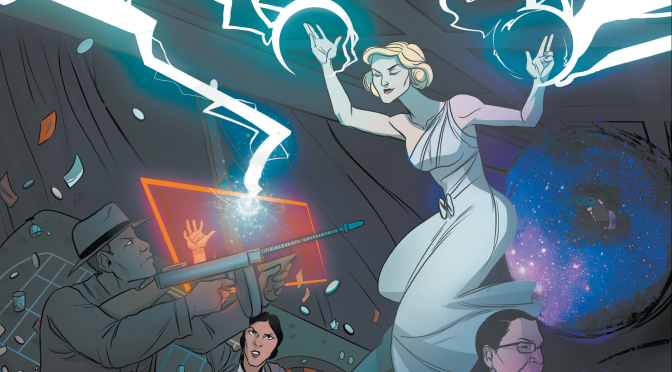 A Rolls-Royce Phantom peels around a corner, stray dollar bills from the sacks in the back fluttering out the open windows, as a pair of police cars howl in pursuit. A man in the rear seat leans out and chatters a string of bullets from his tommy gun at the coppers, but his shots go wide and the gun jams. Cursing, he leans back in to try and fix his weapon, yelling at the woman riding shotgun to handle it. She leans out her own window, raises a hand . . .and a beam of cold energy shoots out of it, creating an ice slick right in front of one of the police cars. The vehicle swerves, skids, and slams into a street lamp, but the second pursuit vehicle gets around it and draws closer. Suddenly, there’s a flash of energy from behind the windshield of the crashed car as one of its occupants steps through a dimensional gate and appears perched on the hood of the Phantom, shotgun in hand, demanding the gangsters pull over in the name of the law. It’s the 1920s. Alcohol is Prohibited, crime pays very well, the law does what it can. And, of course, there are superpowers. This is the BAMFsie-award-winning roleplaying game CAPERS from NerdBurger Games!