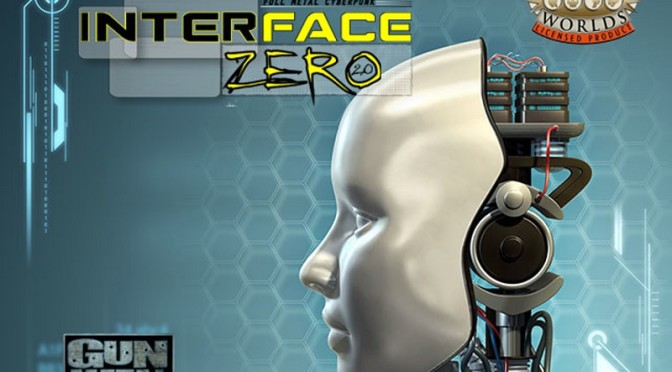 A middleman who knows a guy who knows a guy, but shies away from the messier parts of the business. A soldier for the mob with a body built for the job. A ‘genetically superior’ hacker with an ego you can see from space, and skills to match. A cat hybrid bartender with a shady skill set and a literally deadly mind. Each Meet the Party article gives you an entire group of ready-to-play adventurers (maybe even some heroes) for your gaming needs for a variety of systems and settings. The year is 2090, and you’re going to need more than luck, omae. You’re going to need a team. Come on, let’s Meet the Party for Interface Zero 2.0 from Gun Metal Games!

We last saw Interface Zero 2.0 with The Independents and, as promised in that article, Meet the Party now brings forth a ready-to-go team of freelancers for a game in the world of TAPs and hybrids and enhanced humanity. As The Independents mentioned IZ2.0 is a licensed Savage Worlds game, so you’ll need a copy of Savage Worlds Deluxe in order to get the most out of the characters, particularly when it comes to Edges, Hindrances, and certain powers.

Johnson, the Guy Who Knows A Guy

Johnson lives by the mantra of ‘talk your way out of your problems’. Not only does he have great conversational skills with his many Persuasion specialties, but his Tailored Pheromones give him +2 Charisma, effectively giving him +2 to all of those rolls. He’s great at reading people, he has double the Contacts and Street Cred as the rest of the party, he’s only bested at gathering information by Mitnick when the hacker is plugged in, and he’s a decent shot with his pistol . . . so long as he can get over his fear of bloodshed and draw the thing, that is.

Cujo might not be a member of any military, but as a soldier for the mob he’s easily the equal of any ‘professional’ combatant. In range or melee there’s no one in the party better. His life full of augments and behind the scopes of a gun have taught him how to maintain both, and he’s also a decent driver. Finally, he knows his turf well and keeps an eye out for trouble that wanders into it. Only trouble is that he’s ruffled some feathers and pinged on a few radars . . .

Mitnick is the kind of being that everyone with a Tendril Access Processor fears, and since that’s pretty much everyone on the planet the hacker is particularly potent. Very little on the Global DataNet is safe from him and as a result he makes good money as a hacker and an information broker. Like most Human 2.0s, of course, he has a series of personalty defects that would be a lot more devastating to his employment prospects if he wasn’t so damn useful. At least, when he finally pushes things too far, he isn’t too bad of a shot.

Prance tends bar both as a front and as a way to keep her paw on the pulse of the community, nothing more. Her real work involves skulking around, breaking in, pouring on shotgun fire, and wreaking havoc with her psionic abilities. She’s agile, stealthy, has keen senses, has no trouble with getting up into the rafters, and is trained and equipped to make practically any lock open before her. She’s amazingly skilled with telekinetic powers, earning her the title of ‘tweek’ in the community. Her starting powers let her lift objects, send out bolts of psionic power, and deflect attacks. Now if only she wasn’t so . . . volatile when cornered, maybe people wouldn’t be spreading rumors about mind bullets.

The above characters all use the “skill specialization” rules, which are technically optional but highly recommended by the rulebook. These rules divide the skills into separate categories. For example, something with Shooting (Rifles) is going to get his full die with such weapons, but if he then picks  up a pistol and uses it without having Shooting (Pistols) he will take a penalty. Every time a skill is bought for the first time it comes with a starting specialty. Additional specialties for a skill can then be purchased for a skill point.

Additionally, all characters are built assuming that they will feature in a ‘default’ power level campaign, the ‘Street Soldiers’ level. This gives each of them 10,000 credits to spend as they will and an additional 10,000 credits worth of augments. Cujo has gained extra credits for augments thanks to his Chromed Edge, while Mitnick received more starting credits because of his job as an Infobroker.

Johnson is just a guy. He’ll tell that to pretty much everybody. Thing is, he happens to be the guy who knows an awful lot of other guys, all of whom either have opportunities to offer or yet more guys that they themselves know. As it turns out, a middleman is extremely useful in 2090, which nets Johnson a lot of credits and other such profits. Of course, he’s not without his troubles; he got into the business in order to deal with some debts that persist to this day, and the job is stressful enough that he can sometimes be found in his cups ‘after hours’. Plus, he never really got used to the violent aspect of the shadows; while a decent shot, he’s never as fast on the draw as you’d expect.

Cujo was literally built for violence, a brain in a machine tailored to destroy whatever is downrange or within reach of a knife. He feels a strong responsibility to his patrons, although that doesn’t stop him from pursuing ‘personal’ business with the team until the bosses give him a call. Personality-wise he’s a straightforward man; do the job, get paid, move on. Of course, his methods of finishing the job have earned him some enemies, and he’s a (somewhat) known element to the authorities.

Mitnick doesn’t just tell people that he’s the greatest hacker to ever live; he believes it. It’s hard to argue with the 2.0; certainly the rest of the group haven’t seen him bested yet, as much as some of them may want to. He’s mule-headed, has an alarming tendency to leave behind ‘calling cards’, and can never seem to leave well enough alone if there’s a chance he can gets his hands on new information.

Prance got hit with the double-whammy of people who won’t like her: she was born a cat hybrid when plenty of people don’t care for the animal folk, and she’s a zeek when few understand and most are afraid of the emerging psionic potential of humanity. By day she tends bar. By night, she puts both of the things others hold against her to good use. She wishes she had a better grasp on her psionic powers, and wishes just as much that strange rumors regarding those powers would stop following her. She still goes about her business, and makes sure that those who work with her get home to spend their pay.

Johnson is a little ambivalent about Cujo. Granted, as a Fixer, the mob soldier is exactly the kind of person Johnson should like to get in touch with an entire variety of clients. But the cyborg seems to have a proclivity for getting involved in hard-to-clean bloodshed, exactly what Johnson prefers to avoid. Mitnick would almost be a competitor in the fixer game if the 2.0 wasn’t so unsociable. As things stand Johnson considers them to be different sides of the same coin, Johnson in realspace and Mitnick on the Net; so long as Johnson’s share is not infringed upon he’s glad to put the hacker’s skill to good use. Prance, at least, seems to understand the need for discretion, what with her skills at covert operations and her cover as a bartender. The mind-bullets thing is a little weird, but at least it’s useful.

Cujo knows the value of someone who knows someone; the politics of the mob are pretty much built on such an idea. As a result the cyborg trusts Johnson to know what’s going on and what needs to be done in order to get a payout. Mitnick is annoying, pretty much end of story. Granted, he’s useful, but between his arrogance and his apparent need to keep digging where he shouldn’t means that Cujo only doesn’t kill the 2.0 so long as the credits keep flowing. Prance strikes Cujo as a fellow professional. More tricksy than a straight-up fighter, but she knows what she’s about and knows the meaning of loyalty, something Cujo can respect.

Mitnick is, of course, of the opinion that he is better than everyone here and that the functionality of the entire team would plummet into disaster without him around. In some respects he might be right, but the end result is bare tolerance from his teammates that Mitnick never seems fazed by; he either thinks they love him or just ignores their glares. Johnson is good to have around to do the boring talking bits, Cujo is a necessary savage, and Prance is useful for dealing with those primitives who secure their treasures with something so low-tech that Mitnick can’t hack it.

Prance trusts Johnson pretty decently, but only to a point. He’s done right by her so far, but he’s a middleman with debts, and there’s usually one nefarious group or another offering credits in exchange for a zeek – alive or dead. But she’s not the type to assume guilt, so the partnership goes on. Cujo can be a liability; the cyborg is hardly stealthy, although at least he’s decent at concealing his weapons when he walks down the street. But once things go badly and stealth is no longer an option he’s exactly the kind of operator someone like Prance likes to have for the exit strategy. Mitnick grates the nerves, but it’s his quirk of leaving ‘calling cards’ that truly get’s Prance’s hackles up. A teammate is a teammate, though; she’ll keep hauling him out of the fire so long as he keeps faith with her.

It’s a dangerous world come 2090, but there are a lot of options for this crew. Depending on where in the world a campaign starring them is set, their stories could vary wildly. Their contacts might be entirely different in Boston than if they were in Paris (one reason their Contacts are not detailed here). Their turf could determine what kind of organization Cujo actually works for, and how accepted or persecuted Prance’s hybrid nature is. Exactly what kind of life these characters lead, at least as far as their starting circumstances, is up to the players and GM.

In any case, will the payout be enough to keep these operators off the street, or will their luck run out? That’s for you (and your dice) to determine!

Thanks to Aaron Marks, my Interface Zero 2.0 GM, for introducing our group to the game and for looking over these characters to make sure they were functional. For the curious, he also goes by Friend Computer.