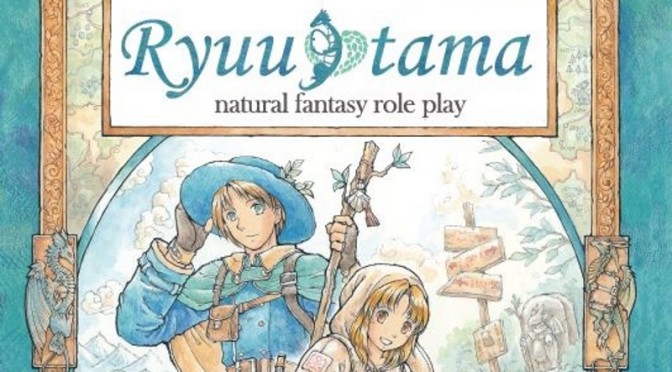 Long ago the four dragons of Spring, Summer, Fall, and Winter gave life to twenty dragons of earth and sky, who in turn gave the world its beautiful form, its ever-changing weather, and its many forms of life. These twenty-four dragons were the start of everything we know, and their kin still maintain a watchful eye. Today, an ancient custom among the people tells that all men and women must leave their homes and travel on at least one extended journey. Called Travelers, these people live a life of danger and great rewards, for though the wilds are full of monsters and treacherous terrain and the weather often fierce they are also beautiful, full of potential. And, always, one of the one-thousand and one Ryuujin watches over the Travelers, recording their stories and guiding their steps. Come on, Travelers. The path to Ryuutama awaits.

Ryuutama, “the natural fantasy RPG”, has a somewhat interesting lifepath. It was originally written by Atsuhiro Okada and a small team in 2007. It apparently was successful enough in its native Japan to catch the eyes of people around the world. Two such people were Andy Kitkowski and Matt Sanchez of Kotodama Heavy Industries, who set about translating the game into English. After what had to have been quite a bit of work and a successful Kickstarter campaign, Ryuutama has now arrived on the English-speaking RPG scene

The premise of the game is very simple. The player characters are Travelers, journeying from town to town, surviving whatever challenges they run into and getting the most out of their time on the road, earning the game its epithet “Hayao Miyazaki’s Oregon Trail”. The Travelers are sometimes described as “Town NPCs”. Rather than Fighter or Mage, the classes are things like Farmer, Hunter, Merchant, Minstrel and so on. Out in the wilds the Travelers have to find their way, deal with the weather, combat any monsters that impede their progress, and manage their supplies. Once at a town they can then restock food and water, trade goods, and see what sort of paying work needs doing; while not professional adventurers in the same sense as in D&D, it has become tradition to offer Travelers work (sometimes hazardous work!) so that they may fund their journeys.

Likewise, the mechanic of the game is an easy one to learn. There are four Ability Scores: Strength, Dexterity, Intelligence, and Spirit. You pick from one of three arrays, with the ‘Average’ putting a 6 in everything while the ‘Specialized” puts 8 in two and 4 in two, with ‘Standard’ holding the middle ground between the other choices. These numbers represent the size of a die. Rolls will require two dice, such as Strength and Dexterity [STR + DEX], and are made against a target number that varies depending on the task. If the roll equals or exceeds the target, success! If both dice roll their max number, Critical Success! If they both come up 1, it’s terrible failure: a Fumble! But, to soften the blow, everyone in the group gets a Fumble point that can be used for Concentration (more on that later).

Once you’ve chosen your starting Ability Scores, you then choose your Class. Each Class has three special Skills which can help them on their travels. As an example, the Hunter has Animal Tracking, Trapping (allows the Hunter to harvest resources from monsters), and Hunting to provide extra food. Meanwhile the Merchant is Well-Spoken, is an Animal Owner, and is a Trader. After choosing a Class you then choose a Type: Attack, Technical, and Magic. Attack Types are better at combat, Technicals are good at succeeding on checks and have better carrying capacity, and Magic Types learn Incantation and Seasonal Spells which are both useful and good for tying the character into the themes of the game. Once that’s done, a Traveler chooses a weapon, a personal item, and 1000 gold worth of gear. All that’s left is to detail the character (appearance, hometown, reason for traveling, personality) and you’re ready for the road. As your Traveler continues his or her journey they’ll gain experience and level up, earning things like Ability Score increases, new skills, and even a second Class and Type. And, if they travel long enough, their story will draw the eyes of a dragon of the seasons and enter into legend.

However, there’s one more character to include: the Ryuujin. A character controlled by the GM, the Ryuujin can be thought of as an ‘in-universe’ GM of sorts. Acting as a guardian spirit, the Ryuujin watch over Travelers and record their tales, which are then used to encourage the growth of a seasonal dragon in the Ryuujin’s care. While the Ryuujin will spend most of his or her time ‘off-screen’ manipulating events from a distance, they have a number of ways to influence the adventure. They can wield Artefacts to cause constant effects, shapeshift into mundane forms to guide or observe the Travelers, cast Benedictions to give Travelers benefits for crafting a certain kind of story, or use the powerful Reveil ability to assume a fully draconic form to lend assistance.

There are different types of Ryuujin that the GM can choose to play, with the type determining what kind of stories the Ryuujin can best support via type-specific Artefacts/Bendections. They can be as simple as the Midori-Ryuu, the green dragons who love stories of adventure and exploration, and as complex as the Kuro-Ryuu black dragons who favor conspiracies, betrayals, and tragedies. Interestingly, the Ryuujin also advance like a character, if in a slightly different manner. Travelers, as previously mentioned, gain XP and level up as in many other games. Ryuujin, however, instead count the number of sessions they have been involved in. The more sessions the same Ryuujin is the caretaker for, the more powerful they become, gaining access to more powers and the Life Points that they can spend to use them. Ryuujin, like Travelers, can even perish if they run out of Life Points (probably by using an ability to save their charges from certain doom)! After all, the Ryuujin’s job is to keep the story going! It should be noted, of course, that not everything the Ryuujin can do is strictly beneficial. A good story, after all, has adversity for the characters to overcome, and to a Ryuujin a good story is everything!

The concept of a Ryuujin is an interesting one. GM’s are, by their very nature, kept somewhat apart from their players. People stuck being GM more or less permanently can often miss the player life, but the idea of the GM also being a player via a GMNPC can often have mixed results; for every one that blends in with the party there’s another who overshadows them. The Ryuujin, however, seems built to influence the campaign and create a unique character, while keeping the character’s impact limited to reasonable levels with the Life Points

Alright, so you have your Travelers and your Ryuujin. What next? Well, the journey of course. A standard day for a group of Travelers involves waking up to see what sort of Condition they’re in, navigating towards the destination, dealing with the terrain and weather along the way, and finding shelter for the night. Of course, there’s a lot of leeway there. The party might indeed encounter monsters, but just as often they could come across some natural wonder to explore, or interact with fellow Travelers along the road. Much of the challenge is in dealing with the environment; a sunny day walking through the grasslands is easy enough, but trekking through a blizzard in the alpine regions is much more challenging. Resource management is also important, between acquiring the right gear and keeping track of rations and water.

Towns aren’t just made by the GM/Ryuujin; the players are encouraged to participate in the design of their next destination, from the type of settlement to what kinds of goods they might find there. On a larger scale the world is much the same; while the world might not be very well out-lined at the beginning of a campaign, once the GM and players get a feel for it they can craft the world-at-large. Examples provided in the book range from a fairly standard medieval setting to a world of floating landmasses with dragons to ferry Travelers between them. The ability to craft the setting to fit the stories that the group (and Ryuujin) want to create seems a very useful one.

When combat does happen, it takes a form that will probably be very familiar to players of JRPGs. The battlefield is divided into a Front Area and a Back Area, with several Objects scattered around that characters and opponents can interact with. Melee characters can engage one another in the Front Area, but until the Front Area is cleared of opponents those in the Back Area can’t be reached. The Back Area is the realm of ranged combatants and lots of magic users, who can often target every area on the battlefield. A single Initiative roll is made to determine order of actions, characters stay conscious and in the fight until they reach 0 HP, and characters are killed if their HP reaches a negative value of their Condition score for the day. In addition to HP, characters also have Mental Points (MP). MP can be spent to use spells, but can also be used for Concentration, which adds +2 to a check. Concentration can also be used out of combat, but always costs half a of a character’s MP unless a Fumble point is used, which is what makes them such a good consolation for rolling the Fumble in the first place. If too much MP is spent the character could faint, so be careful!

I was lucky enough to get to play Ryuutama at Gen Con 2014 thanks to Games on Demand (the same lot who introduced me to Amidst Endless Quiet), back when the translation was still somewhat ongoing and before the Kickstarter. We actually played through the sample journey which is in the book, a trek through the grasslands interrupted by heavy rain, a few wrong turns, and a nekogoblin shadowing the party for reasons of his own. Little time had to be spent learning how to play, and once we got going I had a lot of fun playing a Minstrel, encouraging the Noble, Farmer, and Hunter who were traveling alongside me. What really stuck out to me was that one of the players had followed his friend to the table, having never played an RPG before. If someone walked up on the table mid-session, they wouldn’t have been able to tell it was his first time roleplaying; the system and setting had eased him right into character.

The book itself is of good quality, with plentiful and enjoyable art with an easy-to-navigate layout, and the translation seems top-notch. The PDF of Ryuutama is currently available at Drive Thru RPG for $14.00, and as of this writing has already become an Electrum Best Seller. The physical version is expected to drop in September. Previews of the game, as well as free downloadable resources, can be found at Kotodama Heavy Industries’ own site.

Looking for a simple game of journeys and wonder? Eager for a rules-light system that puts less importance on slaying monsters and more on the experiences among and between towns? How about a game where the GMs get to play around in the the game themselves, without overshadowing the players? Then gather your gear, get ready to write about your travels, keep an eye out for the Ryuujin, and step onto the paths of Ryuutama!

One thought on “The Independents: Ryuutama”