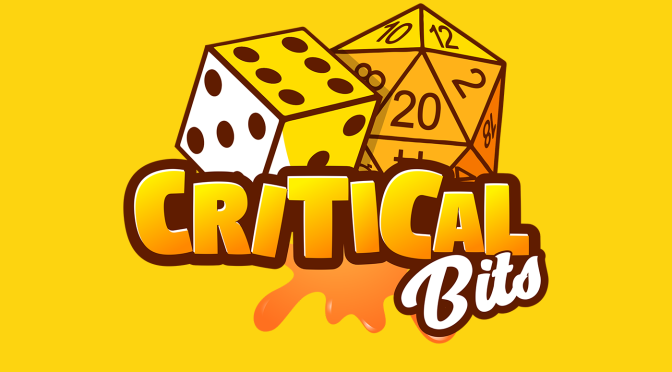 “Welcome to Heavendale, a City of Clouds.”

We’re about to get REAL weird. And you’re gonna enjoy every moment of it.

In a world suffocating with podcasts attempting to become the next Critical Role/High Rollers/Adventure Zone, it becomes so unique for an RPG actual play that is so unapologetically its own thing. That doesn’t desire to replicate Matthew Mercer’s NPC acting skills, but can make you feel as immersed in the world through sheer personality. A podcast that can make you revolted in the best way, but also tug on your heartstrings like a lute player, oftentimes in the same sentence. A podcast that is about the characters, not the situations they often encounter. Although those situations are pretty good too. A podcast that involves superheroes, body horror, and corndogs all in equal measure.

This is Critical Bits. And it is my favorite RPG podcast in the world.

Author Note: This article contains spoilers for Critical Bits up to episode 28.

Critical Bits is a podcast utilizing the Masks: A New Generation system published by Magpie Games. It is GM’d by Joel Ruiz, a self-proclaimed “Bastard-Man”. The show is based around the following three superheroes of the city of Heavendale:

This is our crew of heroes, The Fun Bunch (rarely do teams get to choose their own names), and together they will tackle and topple the evil fascist organisations D.A.Y.C.A.R.E, D.E.T.E.N.T.I.O.N and N.A.R.C. If you learn anything from this podcast, it’s to never trust acronyms.

When Critical Bits opens, our heroes have stolen a mysterious briefcase from the villain, Ratfink. Whom Kim had previously worked with before her conscience overcame her. Within the hour episode, the following has occurred:

All in all, I was hooked by the show’s absurdist humor and antifascist satire. I booted up the next episode on my app and laughed while listening and playing Bloodborne.

But as the show continued, laughter was far from the only thing that this podcast drew from me.

It aroused a delightful revulsion with its shocking surprise of body horror, such as the ingenious (some would say maniacal) usage of a superteen’s out-of-control elasticity powers. And yet, as opposed to when I watched The Fly, I never felt physically uncomfortable in the worst way while listening. It made it stand out. Made it unique in the mounds and mounds of superhero media in a way that only Immortal Hulk could remind me of. The cast are masters of knowing when the horror factor is appropriate.

Its absurdist humor only skyrockets as the series continues, and goes hand in hand with its antifascist and militant leftist nature. D.A.Y.C.A.R.E is comically authoritarian without ever making them seem solely like a joke, because their actions have their footing in the real world fascist organisations that exist. They’re real and Critical Bits acknowledges this, but never makes it a point of reminding you how horrid the world can be. Instead, Critical Bits slaps you on the shoulder and goes “That guy was an asshole, huh?”

However, to me what Critical Bits achieved in the most meaningful way was making a connection between its audience and the characters. You learn that these teen heroes are not just facets for the powers they use in cool ways. They’re people. Flawed and virtuous in equal measure.

There’s Alex’s growing coping mechanisms as the weight of superheroics and the trauma of what they go through begins hitting her. How her eventual discovery of superpowers with godlike potential only causes it to strain further as opposed to simply being a be-all, end-all cure. Alex is someone who cares so intensely, with all the baggage and benefits that comes with that.

Then we have Gerry’s misguided attempts to do what he believes is right and the consequences which form a noose around his neck. How, despite the seemingly careless and apathetic front, Gerry genuinely wants to help and protect his friends. Even if it literally kills him.

Or the fact that Kim is a genuine Crime Orphan, which is revealed to be so much more than just a quirky name. The found family she had in her former team of The Mechanics (oh you’re going to love them!) and the new one she’s discovered in the Fun Bunch. Kim is someone who wants to belong.

As these characters go through their shared trials, victories ,and suffering you never get the feeling you are simply waiting for the heroes to pull out an 11th Hour superpower to save the day. Instead, you’re listening to a group of youths who are lost and trying to figure out how they can get through what the world is throwing them into, with themselves and those they care about intact.

Critical Bits is a superhero media that’s not about the powers. Instead, it’s about the people who have them. The fights aren’t exciting because it’s people with meta abilities duking it out. It’s evocative because these are characters you’ve come to care about and they’re in trouble. The victories are earned for the tribulations they went through to get there, rather than simply being a foregone conclusion.

The show never misses the opportunity to be strange and bizarre, with its introduction of talking alien guns, a planet called Hell, and Goku Boner Pills. But these wondrous moments only make instances such as when Gerry finally confronts his often absent mother pierce straight to the heart.

At the end of the day, Critical Bits is about these teens fighting tooth and nail to save the day. Sure, they’re naive, stupid, and reckless as much as heroic. But guess what? So were you as a teen. So were we all. And what teen didn’t think about saving everyone with special powers now and then? Critical Bits takes this emotion and focuses it into one of the most entertaining and heartfelt podcasts on the market today.

This is Critical Bits. And it is my favorite podcast in the world.

4 thoughts on “You Got To Get These Bits: Why You Should Listen To Critical Bits”