Dungeons and Dragons has a long and storied history, but like all long and storied histories there are some bumpy parts. When Third Edition (3e, and then 3.5e) came out, the first version of the game produced by Wizards of the Coast, many of the old guard were less than pleased. It was this reaction that planted the seeds for the OSR movement, in addition to the Open Gaming License (OGL), which made it easier to use the basic mechanics of existing D&D rulesets. Despite having detractors, 3e was wildly successful, so successful that it too inspired a wave of dissatisfaction when it was replaced by the significantly revised Fourth Edition (4e). The shift in design and the decision to discontinue the OGL at the end of the 3.5e product run not only alienated some players, but left many content producers hung out to dry. One of these was Paizo Publishing, a well-regarded outfit who had made a name for themselves publishing Dungeon and Dragon magazines. When this license expired in 2007, the entire company was in jeopardy. It was then that Paizo made a bold move and developed its own OGL-based game, Pathfinder.

END_OF_DOCUMENT_TOKEN_TO_BE_REPLACED

Just when you thought it was safe to go back on Kickstarter . . . the lazy relaxed summer of June and July has given way to the insanity of a pre-GenCon product push! There were over twenty Kickstarters of new games, and even after picking out the second editions of recent games (Reign, Geist) and games we’ve already covered, it was still tough to narrow it down to just ten! The ten here represent games that do something new, whether it be through new mechanics or new ideas for settings. There are also a couple revivals, which are more than mere second editions due to long absences from publication as well as dramatic rules revisions. All in all, this set of ten Kickstarters represents a swathe of games that are giving us something new with rules, genre, or format.

END_OF_DOCUMENT_TOKEN_TO_BE_REPLACED

With the mast successfully returned to the pirates, the adventurers began preparing for their trip inland to the Imperial Shelter. When the ship was crewed and outfitted, Salty, the piratical second-in-command had a surprise for the outgoing party. A shabby looking kobold was almost thrown at the adventurers. He was small, even for kobolds, and his ragged clothing was covered in singe marks. Apparently the pirates had picked him up at some point, and wanted him gone.

“I am Weekbadd! Help me prepare for when the First Lizard ends the world in holy fire!”

This was going to be interesting.

END_OF_DOCUMENT_TOKEN_TO_BE_REPLACED

Time Travel is a daunting mechanic for any GM to attempt to incorporate in their game. While using time travel as a platform for historical settings and conflicts can be fun, eventually your players are going to ask “wait, what happens if we show Beethoven a recording of his Fifth Symphony before he writes it?” or, even more problematic, “can I go kill my grandfather?” These are questions which, for the sake of the integrity of the concept, can’t be left completely unanswered (though you can probably tell the player trying to kill his own grandfather to drop it before something bad happens). The good thing is that time travel as a game concept leans heavily on improv, and does so in a way that can be very helpful with developing your improv muscles in a fun, non-game breaking way. That’s because with time travel, you can come up with whatever consequences you want…the players already have the mechanism to fix it.

END_OF_DOCUMENT_TOKEN_TO_BE_REPLACED 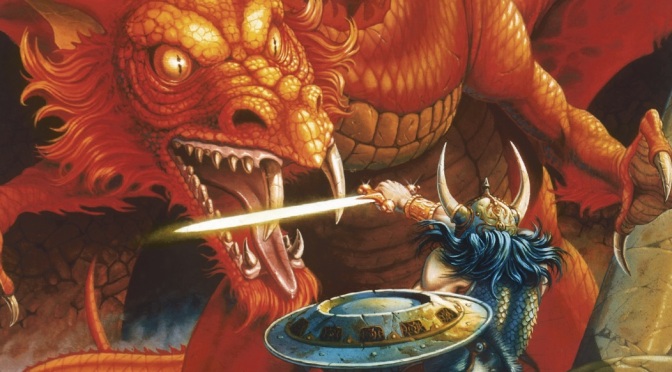 It’s the genre that started it all, and it has set the baseline for what people think of when they hear the term “role-playing game”. It’s a literary genre of astonishing breadth, that still seems to get people thinking about elves and wizards. So why is fantasy role-playing such a different animal than fantasy in general? And what sort of games are hiding in the wings around the 500 pound Gygaxian elephant in the room? Today, the Level One Wonk is going to look around what fantasy role-playing is, how it’s related to fantasy literature, and what that all means when it comes time to sit down and roll dice.

END_OF_DOCUMENT_TOKEN_TO_BE_REPLACED

Welcome to Kickstarter Wonk for July! This month sees game projects a little thin on the ground, as many people are off at the beach, not running Kickstarters. To make it worse, the dastardly Seamus stole a great Kickstarter, Blackwind Project, out from under my nose and reviewed it already! The nerve! (It’s a Halfling-eat-Halfling world out there. Hence the name. – Ed.) Well, I’ve still managed to gather up ten projects, though there are a few honorable mentions in there to bulk it up. Have no fear though, dear reader: there’s a lot of good stuff in here, and that’s doubly true if you like supers, dieselpunk, or eating game pieces.

END_OF_DOCUMENT_TOKEN_TO_BE_REPLACED

After retreating from the crypt, the adventurers went towards the oceanside of the abandoned city and made use of the tools they were able to find. Elliot used an old forge and anvil to rework the broken suits of Enchanted Armor that were fought in the crypt. Out of six suits came one firbolg-sized suit of plate mail, and breastplates for a couple of the others. The treasure from the crypt was buried in the basement, and the adventurers were able to rest under a roof, above ground, and in beds. Before the night fell, Elliot, who had been vexed by the adventurers going in and out of fairy doors, wrote a note in Sylvan and gave it to Hrive. Neither of them knew who or what was causing their compatriots to travel back and forth between the current world and the Feywild, but the two fey in the party were the ones who had the best chance of finding out. Hrive did have the dream of the forest and the thick bushes, but this time the laughing woman gave him a cryptic invitation that sounded like it may have been meant for Elliot. Hrive awoke in a cold sweat, but appeared to have lost little time compared to some of the disappearances of his compatriots.

END_OF_DOCUMENT_TOKEN_TO_BE_REPLACED

Ah, GURPS. One of the most comprehensive toolkits on the RPG market, GURPS and its plethora of supplements offer the ability to play in almost any genre at almost any complexity level. The tradeoff here is that when you open the GURPS Basic Set for the first time, you are dazzled and overwhelmed by a vast range of options to select, dials to adjust, and levers to pull. Coming from a game like D&D, a GM starting with GURPS isn’t going to know where to, ahem, start. Steve Jackson Games realized that, and recruited two GURPS veterans to write How To Be A GURPS GM. While this slim volume is thin on generalizable GMing advice (with admittedly good reason), it does exactly what it says on the tin, and provides some guidance on how to actually make GURPS do what you want it to do.

END_OF_DOCUMENT_TOKEN_TO_BE_REPLACED

So far, System Hack has highlighted Seamus working through the process of writing a hack for an existing role-playing game, specifically a mecha hack for Genesys. In my first System Hack outing, I’m going broad, super broad! We’re not talking about a specific hack, or even a specific game. Instead, I’m going to talk about a design choice that is so prevalent, so widely assumed, so transparent, that it’s not a given that everyone will give it much thought. What’s that, you may ask? Well, it’s dice. Good old dice.

END_OF_DOCUMENT_TOKEN_TO_BE_REPLACED

Welcome to Kickstarter Wonk! The month of June was an embarrassment of riches for RPG Kickstarters, but I’ve taken on the sobering duty of narrowing the month down to my top ten projects. Here you see some inventive games, some games by rising stars in game design, and some games that just need to be seen. Check it out!