As I’ve wandered into the Indie Frontiers this past year, I’ve heard tales of a fabled place where indie RPG designers gather from across the land: Big Bad Con. This yearly tabletop and LARP convention is hosted in Walnut Creek, CA, a short seven hour drive from my home in Los Angeles. I had never been to an RPG convention before, but this was too good an opportunity to miss. I left LA with a backpack full of dice and a mission—a mission to interview as many up-and-coming indie RPG designers as I could find.

The rumors of Big Bad’s reputation are, if anything, understated. Within hours of arriving I had met Meguey Baker, author of some of the most influential indie RPGs around, including Apocalypse World, Mobile Frame Zero: Firebrands, and the upcoming Under Hollow Hills. I barely contained my enthusiasm sitting next to Avery Alder, designer of The Quiet Year and Dream Askew. I made uncomfortable eye contact with Jason Morningstar, one of my favorite game makers, known for Fiasco, Night Witches, and a host of other Bully Pulpit gems. I got to know a bunch of amazing people who were brought to Big Bad this year by DC’s Babble on Equity Project, an event that raised funds for marginalized creators to attend the convention.

It was a really magical place to be, and it seems like other indie designers felt the same. The convention attracted designers from all over the world, and I was able to sit down with a ton of them to talk about the things they are making. This is the first set of interviews I ran, but there are more to come! Keep an eye out in the next few weeks to see more spotlights on cutting edge design. 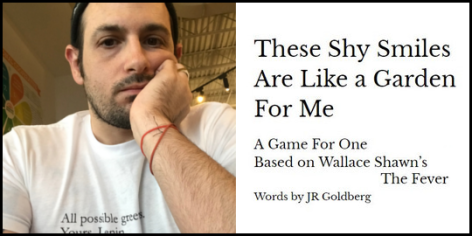 When I came to Big Bad I knew only one thing about Wallace Shawn: he played the inconceivable Vizzini in The Princess Bride. Luckily JR Goldberg, certified Wallace Shawn expert, was there to enlighten me that Shawn was also an accomplished playwright and writer on top of his acting career. Goldberg’s game These Shy Smiles Are Like a Garden For Me is inspired by The Fever, one of Shawn’s plays, and challenges you to wrestle with your privileges and what they say about you. It was written for the recent Libre Baskerville Jam, hosted by previously featured Indie Frontiers designer Jared Sinclair, which produced quite a few strange and artistic RPGs. Shy Smiles is a one-player LARP that takes place over a week, split between feverish nights of fictional introspection and thoughtful days of exposing the uncomfortable systems of your real life. You will spend your days sitting with friends, eating, drinking, and listening. You will spend your nights sitting on your bathroom floor writing poetry by candlelight. The game is heart-wrenching to read, and is worth a look even if the commitment to play seems daunting. Goldberg hopes that the game encourages people to interact with their privilege in a constructive way—that we will sit with the knowledge of our advantages and bias instead of burying them down where they are free to wreak havoc. 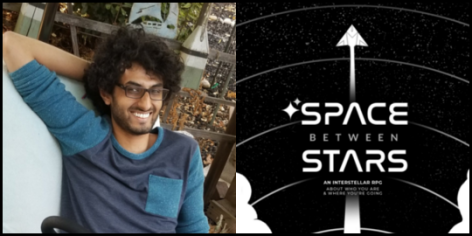 One of the first pieces of swag I received at Big Bad was a small postcard, one side adorned with a spaceship ascending into the stars, the other side with a random table for generating a space-opera style universe. This beautiful little gift was from my friend Viditya Voleti, amazing designer and author of the VOLUME zine that came out earlier this year. The postcard was a teaser for Space Between Stars, Voleti’s upcoming GM-less worldbuilding and storytelling game about a crew of spacers trying to make a life in the vastness of the cosmos. Space Between Stars allows players to collaboratively build a universe and fill it full of character-centric stories inspired by the interpersonal tales of Firefly and The Long Way to a Small, Angry Planet. When I spoke to Voleti about the game, he told me he wanted to design something which highlighted people’s growth through failure. He uses stories of flawed characters travelling through space becoming who they were meant to be to paint a universe where failure is not the final word. Though the game is still in development, he has released a “Quickstart Book” which contains everything you will need to play this episodic space adventure (and the previously mentioned universe generator is also available for free on the same page). 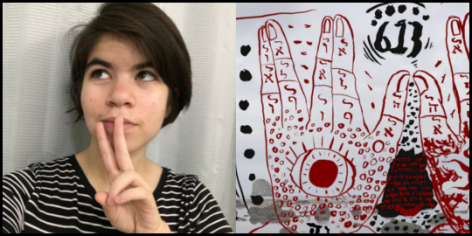 One of the interviews I was most excited for this weekend was with Riley Rethal, co-organizer of the upcoming indie RPG anthology Doikayt. Rethal, alongside the previously mentioned JR Goldberg, is currently running the Kickstarter campaign for this amazing compilation of small games from Jewish writers about their experiences with Judaism. Rethal and Goldberg are joined by other spectacular game designers including Lucian Kahn (Dead Friend: A Game of Necromancy), Randy Lubin (Diagetic Games), and Marn (Catbox). Rethal herself is a prolific proponent of using games to bring people together, and is doing great work as the tabletop RPG specialist at 6 Points Sci-Tech, a Jewish science and technology camp. Doikayt will be full of really interesting games, including an RPG about literally wrestling god, a LARP about eating at a Chinese restaurant on Christmas, and a song-singing game about New York City bootleggers. The campaign has already hit their stretch goal of funding a set of essays on Jewish diversity and approaching the anthology as a non-Jew. Doikayt is shaping up to be a really great collection centered on earnest stories of experience, and heartfelt exploration of creating a community wherever you are.

Of all the discussions I had at Big Bad Con, one has stuck with me more than all the others. On the second night of the convention, after a long day of RPGs, I had a conversation about memory with Dee Pennyway, author of Mnemonic: Cracks in the Mirror into the early hours of the morning. Pennyway is fascinated by how our histories affect who we are in the present—how memories from the past that may have seemed insignificant at the time stick, and shape our identities long after their occurrence. Mnemonic is a GM-less, post-apocalyptic game about this phenomenon. Up to four players explore the past by accessing the memories of their ancestors, weaving recollection around themselves like a physical space. Mnemonic is a game made for personal, thoughtful stories that give the characters context for their lives. I can assure you that Pennyway has spent a lot of time considering how to tell stories about the past, and they have crafted a game which guides players into revelation, discovery, and reflection while preserving the intimate feeling of digging through deep emotional turmoil with the help of others. Mnemonic does something completely new by incentivizing the contextualization of your character’s backstory as you play, and gives players a framework to explore a story of reminiscence together.

When I spoke to Kurt Potts, co-author of Lighthearted, he pitched the game to me as “Breakfast Club, but older, sexier, and magic-ier.” I was hooked from the start, and it turns out that there is even more to love about Lighthearted. Potts’ game, co-written with his wife Kate Potts, is an in-development RPG that is mechanically influenced by games like Savage Worlds and The Veil, stuffed into a wonderfully evocative fantasy 80’s setting. You play as college-aged kids coming of age in a neon dream world of air-conditioned malls, late-night parties, and blood-thirsty vampires. The setting is kicked up another level by its rainbow-light powered magic system, and the deep emphasis on emotion in both the characters and the world itself. It lets you retell the stories of your favorite 80’s movies, highlighting the (usually) nonviolent, but still real struggles of young adults facing the challenges of growing up. Potts is clearly passionate about Lighthearted, and explained to me that he wrote it because it’s the game he has always wanted to have the chance to play. If you are looking for an RPG that will hit the notes of nostalgia while still opening up a fantastic world for you to play in and discover, you can’t do much better than Lighthearted.

Thanks for joining me in examining the work of up-and-coming indie RPG designers! Look forward to more spotlights from Big Bad Con in the coming weeks.

Like what Cannibal Halfling Gaming is doing and want to help us bring games and gamers together? First, you can follow me @Blooperly_ on Twitter for more RPG commentary and news! You can also find our Discord channel and drop in to chat with our authors and get updates! Finally, you can support us directly on Patreon, which lets us cover costs, pay our contributors, and save up for projects. Thanks for reading!